Everybody Wants Some is on par with his early classics. 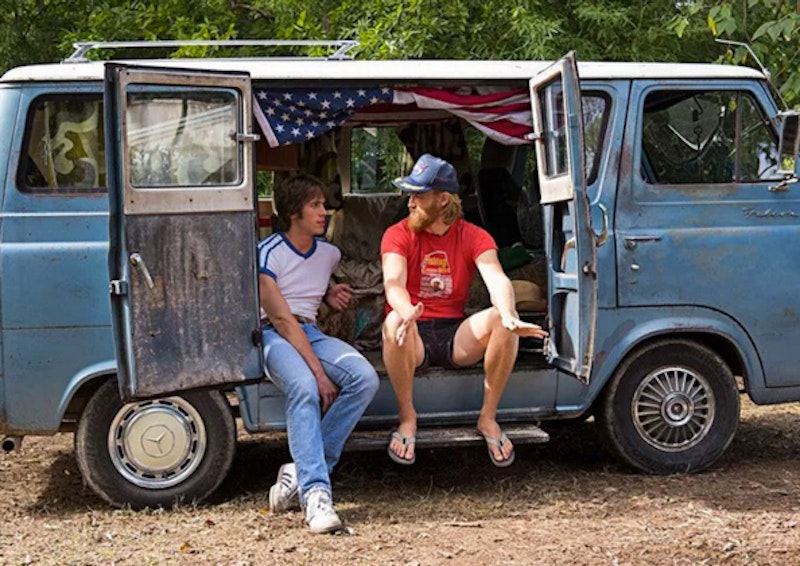 With his new film Everybody Wants Some, director Richard Linklater returns to the premise and vibe of his two early triumphs, Slacker and Dazed and Confused—movies set in Texas that are generally plot-less and meant to convey the air of people hanging out and having fun. Everybody Wants Some is the equal of those films—no film this year has made me smile quite so much.

Everybody Wants Some is about a baseball team, but it’s not really a baseball movie. There’s no big game at the end—in fact, there’s no game at all. It’s not even set during the baseball season. We see one practice, but the film follows the guys on the baseball team at a Texas college, in the few days before school starts in the fall of 1980. They sit around, they party, they bicker, they bust on each other, they go out at night and, more than anything else, they try to get laid. It’s consistently hilarious for its entire two hours, but it isn’t just jokes—there’s outstanding character work here, too.

In addition to Linklater’s other work, the film reminded me a lot of Freaks and Geeks, too—set around the same time period, with similar clothes and haircuts, and a similarly eclectic music soundtrack (there’s room for all the classic rock touchstones, plus disco, plus punk, plus a multi-verse recitation of “Rapper’s Delight.”) There’s a lot of emphasis on the way young people try on identities and looks. And also like Freaks and Geeks—and, for that matter, Dazed and Confused—this movie is going to launch quite a few major acting careers.

Everybody Wants Some works first and foremost because it introduces us to a group of people, mostly played by unfamiliar actors, who act and feel like a real group of friends. It resembles the structure of Dazed and Confused—of which Linklater has called it a “spiritual sequel”—except it’s spread out over a few more days, and the only wisp of a plot is an incredibly sweet romance between freshman pitcher Jake (Blake Jenner) and theater girl Beverly (Zoey Deutch.)

The Dazed and Confused influence is most pronounced in that probably a half-dozen of the actors are playing a version of Matthew McConaughey’s Wooderson. Most effective of these are Glen Powell as Finnegan, the alpha male of the team who easily blends in the disco, the country western bar, the punk show and even a wild theater-kids house party that’s probably the film’s best setpiece.

Jenner was on Glee. Tyler Hoechlin was Tom Hanks’ son in Road to Perdition. Deutch is Lea Thompson’s daughter; Wyatt Russell is Kurt Russell and Goldie Hawn’s son. J. Quinton Johnson plays the team’s only black player, and he’s such a dead ringer for The Wire’s D’Angelo Barksdale that I really thought he was Larry Gilliard, Jr. And Juston Street, who’s responsible for several of the film’s funniest moments, is an ex-ballplayer himself, and the brother of longtime major league closer Huston Street. All of these people are going to be household names before long.

Everybody Wants Some isn’t as ambitious as Linklater’s Boyhood, nor am I expecting Oscar nominations. But I just loved how un-cynical it is. We keep expecting the narrative to take certain beats that it thinks better of taking. It absolutely belongs near the top of the list of the director’s best work.