God's Not Dead 2: Second Verse, Worse Than the First

How many more will there be? 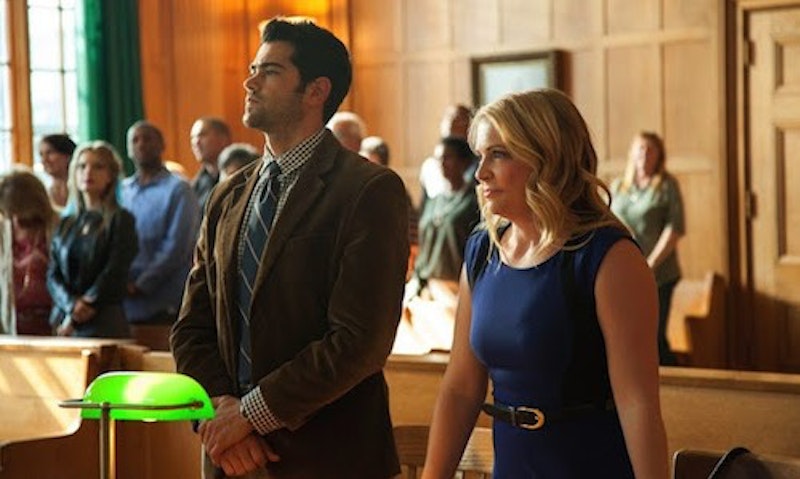 God's Not Dead 2, the sequel to 2014's surprise hit Christian dramatic comedy, has many of the faults and not enough of the virtues of the original. On the plus side: By the sub-par standards of the Christian movie market, the camera work is again professional and the acting slick—it looks like a real movie, or at least a well-funded Hallmark Channel presentation. The downside? Almost everything else.

The first God's Not Dead in 2014 earned a surprising $9.2 million in its first week in limited release, while the second entry (less a sequel than another version) was hosted by three times the number of theaters but earned slightly less money ($8.1 million). That's despite being previously screened by two presidential candidates, Mike Huckabee, who also makes a cameo, and more recently, Ted Cruz in Wisconsin. That factoid exemplifies the movie's narrowcasting to the conservative Christian market, to its detriment both at the box office and as a film.

The latest installment in what threatens to be a long series also centers around a classroom, this time in high school. Well-liked (if lazily named) history teacher Grace Wesley is discussing Martin Luther King Jr. when a student raises her hand and asks whether King's non-violent philosophy could be compared to that of Jesus Christ. Grace agrees, quotes Scripture, the incident is recorded. It then quickly and bizarrely becomes a separation of church and state issue than threatens her livelihood.

Enter a pack of slimy secular lawyers. Actor Ray Wise's sinister eyebrows say everything you need to know about his ACLU lawyer character's contempt for proselytizing Christians. He's in league with the spineless school board and the student's religiously hostile and financially opportunistic parents, who aim to pay for her Ivy League education with the proceeds of the civil suit from Grace's own pocket.

A devout Christian, Grace refuses to apologize, and becomes instantly involved in a vague civil suit in front of a jury, having drawn a rookie lawyer (Jesse Metcalfe, who acquits himself well) from the teachers union because "no one wants your case." From there, our heroine, played passively by Melissa Joan Hart (Sabrina the Teenage Witch), is steered through contrived courtroom machinations that eventually teeter upon a single question: Did Jesus exist?

God's Not Dead 2 hammers home the idea that Christians are persecuted for mentioning their faith in public. But stumbling blocks abound. The movie was shot in Little Rock, Arkansas, and seemingly set there, judging by the flags. But the scenes of vengeful atheists yelling at quiet Christian students standing meekly on courthouse steps would be surprising in San Francisco, much less Little Rock, and comes off as fantastical as Star Wars without the excuse of escapism. The God's Not Dead series purports to dramatize real Christian persecution in America, as the heavily foot-noted end credits attest.

The first God's Not Dead suffered from an uncharitable attitude toward atheists (the only good kind of atheist is a dying one that comes to accept Jesus), but the premise had a certain audacity. Kevin Sorbo played an angry atheist professor who threatens to flunk the one freshman willing to stand up for God unless he successfully argues God's existence in front of the class. It got deeply silly and offensive but wasn’t boring, and Sorbo, best known as the eponymous muscleman in the TV hit Hercules, gave a surprisingly effective Mephistophelean performance.

The second verse is similar to the first: Pastor Dave (a sad sack) and Pastor Jude (full of sunny African uplift) return as a mildly amusing, feel-good interracial buddy act; the patriarch of a foreign family physically abuses one of his children for becoming Christian; everything gets wrapped up at a concert by the Christian pop band Newsboys.

But while the subplots, romantic and otherwise, of the original were confusing, they lent a sense of lived life to the proceedings. This time the action centers on the trial, giving the proceedings a hermetically sealed quality, with fewer entry points for skeptics or the curious. When the father signs the lawyer's contract, the dramatic close-up on the pen lets you know he is selling his soul to the devil. The only subplot of note is equally heavy-handed: Pastor Dave is among a group of pastors whose sermons are being subpoenaed.

Even the court testimony—in both the legal and religious sense—amounts to not much, given that actual mainstream scholarship is pretty confident that Jesus was a real person. It's the divinity of Jesus that's up for debate.

A last-minute addition to the jury, a blue-haired punk girl, is set up to be a pagan, but her wordless revelation otherwise is relatively subtle (just ignore that whole Leviticus thing). More moments like that could have leavened the starchy preachiness and air of predictability permeating God's Not Dead 2. Will Grace "confess" herself "Guilty" (like the Newsboys song at the end) of believing in Jesus in the face of the godless pressure from the enraged citizens of... Arkansas? The answer will come as no revelation.

Which is a shame. God's Not Dead 2 botches a genuine story of the overzealous stifling of religious expression, both in the educational system and the United States at large. The Pastor Dave subpoena subplot comes off ludicrous but is based in fact. The city of Houston in 2014 did subpoena sermons of five local pastors, presumably to see if the churches were engaging in partisan politics during debate over an ordinance that would have granted transgenders access to the restroom of their choice.

Vanderbilt University's nursing school required incoming students to pledge to assist in abortions, a demand rescinded in 2011 after the school was sued on religious freedom grounds. Not to mention Supreme Court fights recent and future, like Hobby Lobby and Little Sisters of the Poor, over federal mandates that they cover abortion and birth control. With such rich material available—much of which is covered in those end credits—why go with a story wholly made up and unconvincing?

God’s Not Dead 2 does show faith-based movies taking a few tricks from their secular superhero counterparts. An over-the-top scene after the credits involving Pastor Dave tests the waters for a potential God's Not Dead 3 plotline, and the official website encourages those who missed the scene the first time to go ahead and see the movie again, thus laying up treasures on earth and in heaven.

—Clay Waters is the author of the self-published cozy murder mystery Death in the Eye.