The ambivalent escape of Hollywood Shuffle. 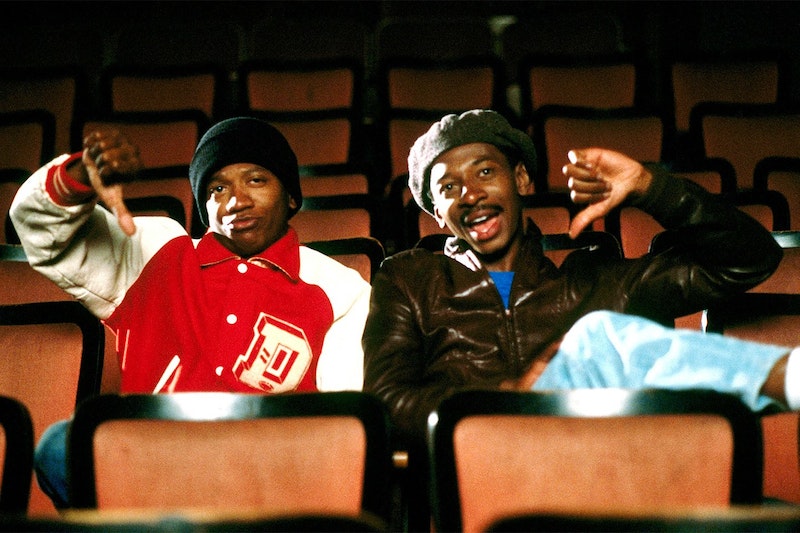 This is part of a series on 1980s comedies. The last entry on Naked Gun is here.

Hollywood Shuffle (1987) is an independent film obsessed with Hollywood.

Writer, director and star Robert Townsend made Hollywood Shuffle for only $100,000, paying for production with his own savings and credit cards, and scrounging odd bits of film stock in the days before digital video. The film revels in its scrappiness; many actors (including co-writer Keenan Ivory Wayans) play multiple roles, and the film's structure is anarchically loose and stream of consciousness. The plot follows aspiring young black actor Bobby Taylor (Townsend) as he tries to land film roles in LA and escape his menial job at Winky Dinky Dog. That simple narrative spirals off into Taylor's (and/or Townsend's) daydreams about possible feared and desired roles, with skits nestled within skits and Taylor's "real-life" story arc cheerfully picked up and abandoned at will.

Taken together those skits (and the skits within skits) paint a bleakly acidic picture of Hollywood racism. Casting directors ask Bobby to imitate Eddie Murphy. Black actors can play pimps or historical slaves, or servants, and that's about it. One of the best skits shows Bobby doing an advertisement for a black acting school, in which white instructors teach black performers to talk jive and walk cool. Back in the "real" world—which is a good bit too real—a casting director earnestly tells Bobby, "I need a little more "black." You know what I'm saying? Umm, like... Stick your ass out more. Bug the eyes—you know how they move."

In addition to mocking stereotypical black roles, the film also kicks the standard white heroes. Daring adventurer Chicago Jones leaps off the side of a cliff and barely gets a scratch because he braced himself; Dirty Larry has all the time in the world to pull out his giant gun because the criminals who have the drop on him don't shoot for some inexplicable reason. An extended detective movie sequence called "The Death of a Breakdancer" has Townsend as a Marlowe-esque private eye, declaring deadpan how much he likes to do the nasty and getting roundly thrashed by men in dresses—a parody and (unfortunately) a reproduction of Chandler's homophobia.

After the detective clip runs, Bobby declares that he’d love to get that kind of role. In part, that's a gag—the detective role is ridiculous. But it's not entirely a joke, either. The film mocks the preposterousness of heroes who triumph over impossible odds through the sheer invulnerable hubris of whiteness. Yet, it also defines success almost entirely in terms of mainstream Hollywood. Bobby dreams of portraying Superman and of winning multiple Oscars. Even the NAACP representative declares of black actors, "They'll never play the Rambos until they stop playing the Sambos"—even though Rambo, as a character, spends virtually all of his screen time murdering people of color. Hollywood Shuffle strongly condemns black actors for taking demeaning, stereotypical black roles. But it doesn't offer any alternatives except for implicitly or explicitly racist white hero roles like Indiana Jones, Rambo, or Dirty Harry.

James Baldwin criticized Richard Wright's novel Native Son on the grounds that the main character, Bigger Thomas, wasn't as smart or resourceful as his creator. Hollywood Shuffle has a similar weakness. Townsend, impressively, created his own film outside the Hollywood system, but he doesn't give his own lead that option. Bobby has to play by Hollywood's rules or get a job in the post office; the film offers him no other options.

That the post office is presented as an honorable alternative to Hollywood’s racism is a cop out. People who work in the post office face abuse and humiliation too; there's no easy path to dignity in a racist capitalist system. That's why Townsend himself took a different path, seizing the means of production himself, and making a messy, pointed film in which he could play exactly the role he wanted. The fact that that part is still too limiting for the actor doesn't diminish Townsend's achievement. It just shows that even for those with great drive and vision, it's hard to break the imagination free from that Hollywood shuffle.