Film Review: Isle of Dogs is a Delightful Creation

Wes Anderson hasn’t made a bad film yet. A- 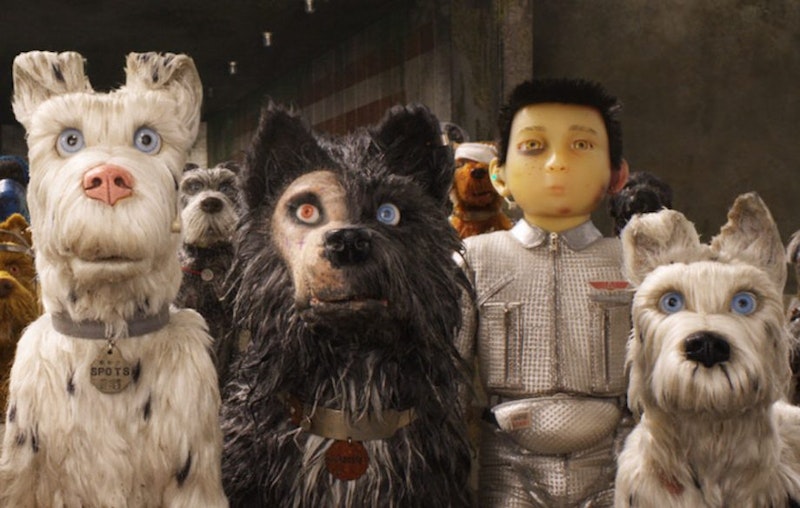 Wes Anderson does it again with Isle of Dogs—another delightful creation of an impeccably built world just slightly off-kilter from our own. Returning to the stop-motion animation format nearly a decade after Fantastic Mr. Fox, Anderson reunites with several of his longtime collaborators, with Roman Coppola and Jason Schwartzman getting story-by credits along with the director and Japanese actor Kunichi Nomura. Meanwhile, the voice cast includes such Anderson veterans as Bill Murray, Jeff Goldblum, Bob Balaban and Edward Norton.

But it’s a newcomer to the Anderson universe, Bryan Cranston, who breaks out here, and he’s a natural. Cranston voices Chief, a dog who’s been exiled, along with all of the others in Japan.

It’s a dystopian, not-too-distant future, and the authoritarian mayor of the fictional Japanese city Megasaki has banned all dogs from the city, pushing them to Trash Island, using “dog flu” and “snout fever” as a pretext. The dogs have names like “King,” “Rex,” “Boss,” “Chief” and “Duke” (voiced, respectively, by Balaban, Norton, Murray, Cranston and Goldblum).

The first part is Lord of the Flies with dogs, with some canine rivalry built around Chief’s former identity as a stray. But the main drive is about Atari (Koyu Rankin), the young nephew of the villain, who crash-lands on the dogs’ island, and searches for the dog of his youth, who was the first ever sent to Trash Island. It leads up to a satisfying ending, with a return from exile, the intervention of an exchange student (Greta Gerwig) and the unlikely involvement of Yoko Ono.

You don’t have to be a dog person to enjoy this movie, but Isle of Dogs does pivot largely on the sanctity of the human/dog relationship. It was pretty wondrous, in Fantastic Mr. Fox, how Anderson’s style translated so seamlessly to animation, but Isle of Dogs is a bigger leap. Animation director Mark Waring have created a world that does for Japan what The Royal Tenenbaums did for New York City—it’s Japan, but about 20 degrees off at all times. Meanwhile, the score, by recent Shape of Water Oscar winner Alexandre Desplait, is fine, but I miss Anderson’s collaborations with Mark Mothersbaugh.

Is Anderson guilty of “cultural appropriation,” or outright racism, in setting the film in Japan and, in some cases, indulging in stereotyping? Your mileage may vary on that question. I saw in the film a loving and appreciative homage to Japanese culture, in

which it’s clear that no ill will or bad faith was intended. Many critics, including Justin Chang, Inkoo Kang and Jen Yamato, have argued otherwise. Their arguments are compelling, although I don’t have a lot of patience for those asking, “Why did it have to be set in Japan?” I don’t know that there needs to be more of a justification than “the director wanted to set it there.”

While Isle of Dogs, like Anderson’s recent Moonrise Kingdom and Grand Budapest Hotel, remains a tick below Anderson’s 1998-2003 masterpiece run of Rushmore, The Royal Tenenbaums and The Life Aquatic with Steve Zissou, it’s still highly enjoyable and beautifully realized. And Anderson, 18 years and nine films into his career, still hasn’t made a bad film yet.