Film Review: Isle of Dogs Has No Relationship to the Real World 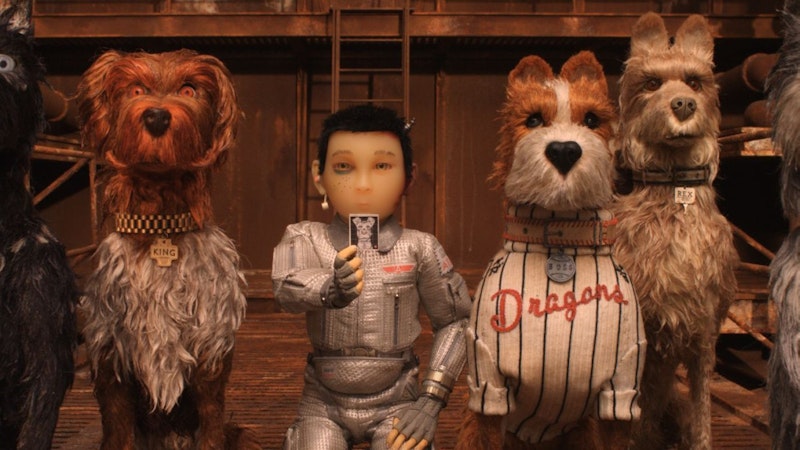 I watch a lot of movies but I don't usually write about them. Too much tsouris, too risky—when I disagreed with Pauline Kael on The Deer Hunter in 1978, she sent a mob of Kaelites to my barn and I had to take them out with my spur claws. They said they were going to spit roast my wife and me; so I had no choice but to do away with them. Their bones are still buried somewhere in our backyard, I’m assuming they aren’t missed. Anyway, film criticism is a dangerous game.

But today people just yell at you over the Internet, they’re too meek to send goons to defenestrate you. I’m compelled to write about Wes Anderson’s Isle of Dogs for a few reasons: first, it’s easy clickbait. You see what Car Seat Headrest had to say about it? “It is an infuriatingly bad film. I am infuriated… I mean props to Wes for finally making a movie that would appeal to literally zero people beyond himself. But also, fuck you… This is the first Bad Wes Anderson Movie and I am so disappointed that such a thing exists now.”

He also called the film “so racist,” and he’s not alone: Hoai-Tran Bui, writing for Slashfilm, called Isle of Dogs “a tone-deaf exercise in cultural tourism,” and “it’s telling that Anderson’s supposed love letter to Japan is purely aesthetic. Isle of Dogs picks and chooses cultural artifacts and tropes from Japan, throwing them together in a mish-mash of feudal imagery, traditional woodblock prints, and inexplicable ’60s period costumes.”

He’s right: there is absolutely no reason this movie needed to be set in Japan. In the packed suburban New England showing I went to, the largely white human crowd laughed regularly at things that weren’t funny: un-subtitled Japanese dialogue, facial expressions, the fact that the main character is named Atari. Anderson says it’s his “homage to Japanese cinema,” which is proof this dude is stuck getting high on his own supply. With each successive film, Anderson keeps burrowing further down into his airless dollhouse with no relation to or concern for the real world. I was never a fan of his work, although I do love The Royal Tenenbaums, because I think he nailed the balance between genuine pathos and stylistic indulgence. I never saw Fantastic Mr. Fox because foxes scare me, so I can’t comment on that one.

I’m not Asian, I’m a rooster, so I’ll get behind Bui’s assertion that the film is offensive and shallow. However I do think this movie would’ve been a lot more interesting and less controversial if it were set in America. We love dogs, right? Pets, all that awful stuff. But what am I going to do? I’m still trying to lay low after my feud with the government a couple of years ago. I’ll say this: Isle of Dogs is a failure of imagination and betrays the director’s fundamental incurious nature, one that’s especially illuminated when he tries to decorate his dollhouse with sumo wrestlers and sushi chefs.

A film from the perspective of persecuted dogs is a great idea, an opportunity to talk about the oppression and discrimination we deal with every day here in America. By making the Japan the country that is so hostile to dogs that they banish them to a “trash island” and surreptitiously poison them with chronic flu is a cowardly move and shows how Anderson has nothing to say about racism or classism in America, or anywhere else in the world.

Isle of Dogs has no relationship to the real world, which isn’t a problem in itself, but when you introduce so many charged political images and ideas into a film of featherweight whimsy, you insult the actual groups these dogs represent, and ultimately reveal yourself as ignorant or indifferent at best.

Anyway, I have to board up my barn now. Don’t get any ideas, Monica and I have caught plenty of molotov cocktails in our time. The stans will not burn this barn down.