Harmony in the Sandbox

The Beach Bum is hilarious and Harmony Korine’s best film. A 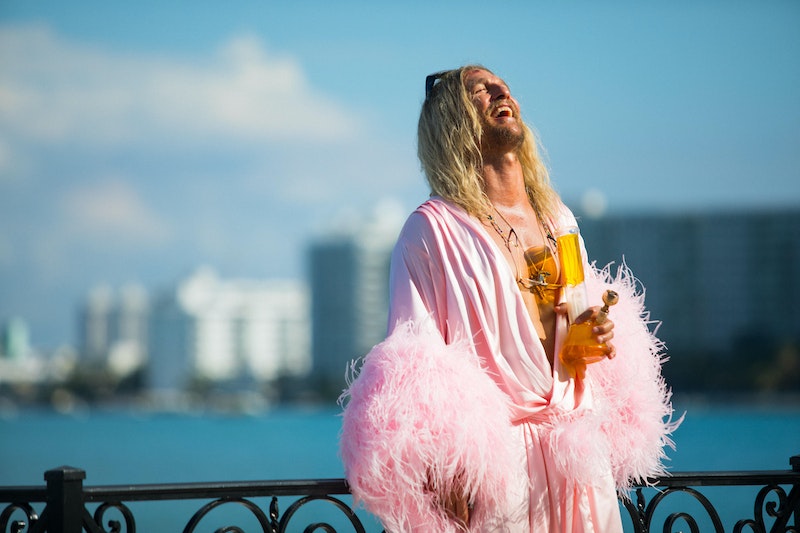 I’ve never been a Harmony Korine fan, though there are great moments in almost all of his films: the kitchen fight in Gummo, the interstitial bits in Julien Donkey-Boy soundtracked by Oval and Jim O’Rourke, and the stunning opening sequence of Spring Breakers set to Skrillex’s “Scary Monsters and Nice Sprites.” But none of them adhere or function as mood movies for me, and a lot of it amounts to arthouse Jackass, just much less funny. But he’s always been an interesting filmmaker and figure, even if I’ve never loved anything he’s done. That changes with The Beach Bum, so joyously stupid and fun, it’s his best movie by some distance.

Matthew McConaughey stars as the titular buffoon, an agent of destruction and indulgence that comes with a stoner’s smile. Moondog, the beach bum, inhales drugs and fucks every five minutes. Korine calls Moondog “[A] verb. A folk poet. A character in a Bob Dylan song dancing through life's pleasure and pain knowing every interaction is another 'note' in the tune of his life… There's no self-censor. He's just a sensualist. Whatever feels good, he just acts on it. So he does good, and he does bad.” The beginning of the film is their daughter’s wedding, a bummer interruption into the perpetual party of the Florida Keys, especially since their future son-in-law is a “limp dick.” He has a body count: his ex-wife Minnie (Isla Fisher) dies only half an hour in, killed in a crash on a drunk joyride taken by the divorced but mostly reconciled couple. This is an important moment and, as with the rest of Korine’s work, the point where you’re either going to get excited or head for the exit.

The Beach Bum moves at a clip, unlike the languorous Spring Breakers, a film that starts on such a high note and nosedives into Malick cosplay after the first 20 minutes. Spring Breakers was just thin on ideas, all of them expressed in that opening sequence, but The Beach Bum is brimming with set pieces, gags, and one cameo after another that redeems that stupid gimmick. Jonah Hill as a “Well, I do declare” Southern gentleman. Zac Efron as a rehab patient with a fade that set his house on fire and almost killed his family. Snoop Dogg as the patron saint of Moondog’s Keys community, ambassador to Jamaica and the good leaf. Martin Lawrence as a dolphin tour guide that gets caught in a shark’s nest. Each one of these characters would’ve made the movie on their own.

Coming from Korine, it’s almost too quick and too easy to take in, so used to his seesaws between junkie voyeur and grotesque confrontationist. This isn’t an art film, it’s closer to the comedies Jonah Hill’s known for, and it should be playing in the multiplexes that screened Spring Breakers six years ago. Benoît Debie’s cinematography is often breathtaking, a continuation of the milieu and color palettes of Spring Breakers, but with none of that film’s miserable dark interiors. Almost all of The Beach Bum takes places outside, and frame after frame explodes with color riding the rails of the rainbow without ever veering into the garish. It’s a coloring book of a movie.

Of course a miserablist like Noah Berlatsky hates this movie, calling it “[A]n execrable fantasy about male impunity which blithely fridges its one realized female character and thinks it's funny when its hero beats a disabled man and steals his money… it’s supposed to be edgy, but how edgy is it to insist that white men obsessed with their own dicks are brilliant and should be cheered on no matter what atrocities they commit.” Slow down, buster. Who said Moondog is brilliant or admirable? Must we condone the actions of protagonists to enjoy them? Pushing unsuspecting people into pools is funny. Robbery, recklessness, assault and battery are funny—at the movies. Would any of you hesitate in calling the cops on a Moondog in the real world?

To quote Berlatsky (lecturing me about The Searchers), “We’re eager to make art conform to our own ideology.” Berlatsky is too busy keeping count of who’s disabled and who’s marginalized and who’s not as The Beach Bum zips along leaving no demographic unscarred. But remember, this is all in good fun. Korine is freer and more focused than ever, and he’s finally embraced silliness and slapstick on their own and for their own sake without any of the dour and leaden stretches of leering at cripples and poor white trash that clog Gummo and Julien Donkey-Boy. To call The Beach Bum "just another story about a brilliant white guy asshole that we're supposed to admire both for the brilliance and for the assholery" is giving it a lot more than it deserves.

Berlatsky shows his hand (and palms) here: "It's impossible to watch the flagrantly repulsive Moondog grope everything within reach without thinking about #MeToo and the forgive-them-because-they-make-brilliant-art attitude which made Harvey Weinstein and R. Kelly possible." Speak for yourself, sir! Systemic rape and abuse in Hollywood are not on my mind when watching an escapist fantasy like The Beach Bum, nor do I see bombs over Sarajevo or Iraq when watching a James Bond movie. The "bubbly carnality" of Isla Fisher aside, Berlatsky's pathological parsing of the sexual acts seen onscreen is so tedious and disingenuous, analyzing the merits of this movie as if it were anything other than cotton candy. Anybody with half a brain knows that a real life Moondog would be a disaster—this is why we have cinema. But we can't all have fun.

Berlatsky’s pan in The Chicago Reader is just as much of a polemic as mine, and I’m not surprised he hates it. But it doesn’t worry me a bit. The Beach Bum is gleeful and celebratory, a liberating film of little weight that has a lot to give—if you’re in a good mood.