The Mess of Us

Jordan Peele’s follow-up to Get Out is a disappointment, by turns too obvious and too obscure. C- 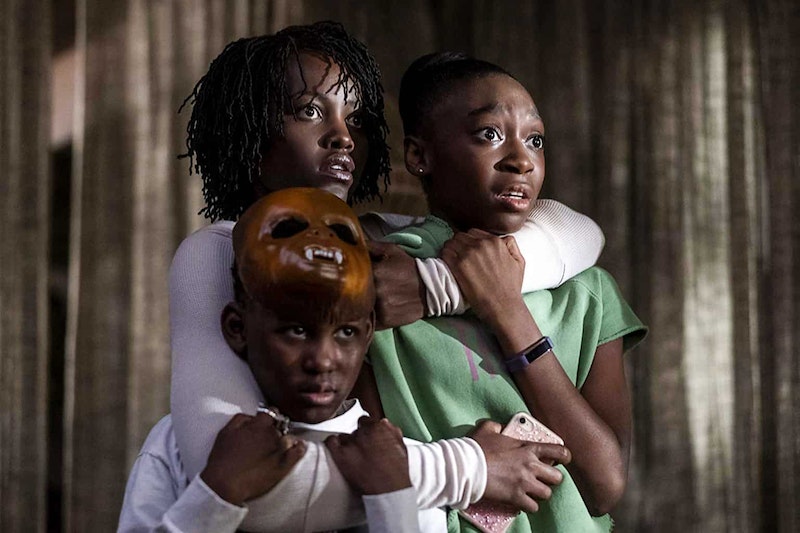 In his rave for Splice last Friday, Stephen Silver wrote, “It’s not as if there was much concern that Get Out was a fluke.” Well, speak for yourself. Get Out, Peele’s directorial debut, set the bar impossibly high. Nothing could reach the pitch that movie hit only a month after Trump’s inauguration and after years of innocent black people killed by police saturating the news. It was an instant classic, not only because it came out at exactly the right time: Get Out is a masterful horror movie whose sociopolitical themes are fully integrated in its dramaturgy. The horror and the message are one and the same. Audiences went electric because it was an enormously entertaining vindication.

But Us isn’t a touch on Get Out in many ways: it’s both too obvious and too obscure. So many ideas presented and left unexplored: the title card at the beginning about tunnels, the shadow people in MAGA red jumpsuits recreating Hands Across America and forming a wall through the entire country, and the whole idea of shadows “rising up.” It’s a gripping experience, but without the dynamics of Get Out. Instead we get a pretty quick switch into action mode around 30 minutes in, then a build to find out what the fuck is happening that goes on until the final 10 minutes. The twist ending is quick and cheap, throwing everything into the air for the most obvious and absurd explanation.

I expected Us to be more of a genre movie, less sociopolitical satire than Get Out, perhaps closer to Peele’s pulp favorites. I hoped he would follow through on his promise to deliver more “social horror pictures,” but his attempt in Us is bafflingly bad, superficial and underdeveloped to the point of distraction.

Lupita Nyong’o stars as Adelaide, mother of a family of four on the way to their beach house in Santa Cruz. Her husband Gabe (Winston Duke) is goofy and disarming, providing almost all of the movie’s comic relief, her daughter Zora (Shahadi Wright Joseph) is a perpetually disaffected young teenager glued to her phone, and son Jason (Evan Alex) is quiet and withdrawn. But before we meet them, we begin with a title card about tunnels in America, an obvious allusion to the underground railroad. And then Adelaide as a little girl in 1986, visiting the same boardwalk in Santa Cruz with her parents, where she gets lured into a hall of mirrors and menaced by a shadow version of herself. She emerges from the experience mute, and at the behest of a counselor takes up dance and track with a vengeance. But the trauma of that day clearly hasn’t left her. So when Gabe suggests meeting family friends at that same boardwalk (the idea never came up before in previous summers?), Adelaide is adamant but eventually relents, insisting they leave before dark.

When Adelaide’s shadow family shows up, Us shifts gears into a pure chase movie. Any tension or mystery is destroyed, and we’re left to wonder who these zombified red jumpsuit scissor murders are and why they’re out for blood. Us succeeds as a horror/thriller film, but Peele clearly has a sociopolitical angle here. The problem is that it isn’t elaborated upon, and the movie’s structure doesn’t allow for any time to dwell or delve into more detailed information about the allegory. Hands Across America is referenced in the first and final shots of the film, a sham charity event that has largely been forgotten or never taught to people born after 1986. This leaves the film’s central metaphor frustratingly vague and undercooked, and the twist, that the “real” adult Adelaide is actually her shadow self, and the shadow Adelaide is the real Adelaide kidnapped in 1986 rising up to get her revenge, is foisted on the audience right before the credits.

But revenge on who? On what? An exposition dump in the final 10 minutes explains little and complicates an already rickety plot into something completely unsustainable. I would’ve preferred Peele went full bore into Blumhouse genre horror and delivered something disgusting and pulpy like Don’t Breathe instead of this, where what little political commentary there is is foregrounded in the most clunky way imaginable (“Who are you?" "We’re Americans”), and the rest is so thin there’s almost nothing to go off of. Also, for a Best Original Screenplay Oscar winner, Peele’s script is remarkably bad: the dialogue in the first 30 minutes is stilted and amateurish, awkward lines delivered by good actors left out to dry.

I know everyone who loved Get Out wants Jordan Peele to succeed, but to hesitate in criticizing a disappointing follow-up is counterproductive and condescending.