The Highwaymen, Bonnie and Clyde, and different approaches to teenage killers in movies. 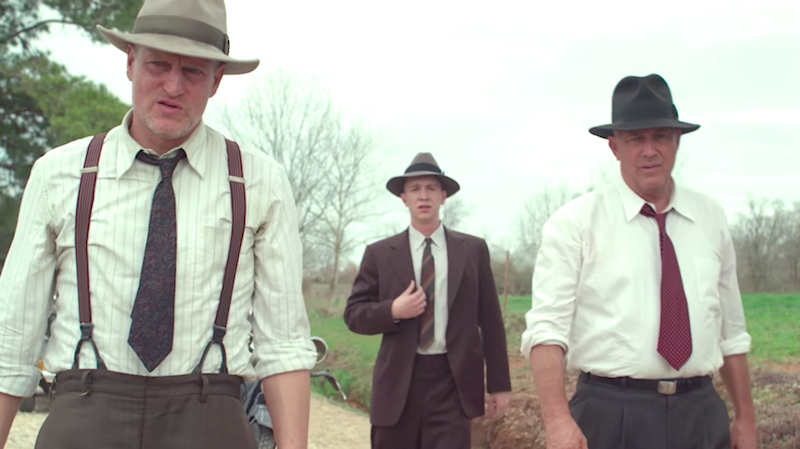 Most are familiar with the true crime story of Bonnie and Clyde—American lovers and criminals who robbed banks in order to, allegedly, give to the poor. Their story captivated America during the Depression Era when poverty was the norm. Their exploits were a perfect distraction for people who felt the need to live the life of an outlaw vicariously.

The story of Bonnie and Clyde and what led to their deaths has gained hagiographic characteristics. Even during the time of their exploits and death, they were treated as celebrities. People didn’t care so much that they were criminals and fugitives. On the contrary, their lawlessness was a cause for celebration against any authority, especially police. But there’s more to the story of these seemingly innocent and misunderstood lovers. They didn’t simply rob banks. In fact, they preferred gas stations and stores, and together with their gang, murdered nine police officers and several civilians, and some storekeepers.

The chase after Bonnie and Clyde and how they met their ultimate end is the vantage point of a new Netflix film, The Highwaymen (2019), directed by John Lee Hancock. At the beginning of the film, we learn that the police and the FBI have been after Bonnie and Clyde for the last two years and the search has yielded no results. Governor of Texas, Miriam “Ma” Ferguson (played superbly by the incomparable Kathy Bates) is forced to bring on a former Texas Ranger, Frank Hamer (Kevin Costner).

Hamer, already retired (partially because of “Ma’s” disbanding of rangers), reluctantly accepts the assignment and another “retired” Texas ranger, Maney Gault (Woody Harrelson) joins him almost immediately. After securing a pretty hefty arsenal of weapons, the two men set out on a journey that takes them across the Texas state line into Oklahoma, Kansas, and finally Bienville Parish in Louisiana where the notorious couple was obliterated with bullets.

Cinephiles will be familiar with Arthur Penn’s 1967 classic Bonnie and Clyde with Faye Dunaway and Warren Beatty in the title roles. Here, Bonnie and Clyde have been placed permanently into an arena of American folklore. Their exploits were glorified and sexualized and they became American martyrs and symbols of anti-authoritarianism. In some instances, Penn took a comedic approach to the story, as well as many artistic liberties. For instance, in Penn’s film, Hamer is captured, beaten, and humiliated by Bonnie and Clyde. None of that actually happened.

With The Highwaymen, Hancock is not discounting Penn’s film. In fact, this earlier take on the story isn’t even on Hancock’s directorial radar. Rather, he takes a historical approach in order to shed light onto the men who went after the outlaws and what drove them to do that in the first place. It’s not meant to be an antidote to Penn’s film. Rather, we’re becoming privy to the interior lives of Hamer and Gault in order to find the meaning in all of the evil and mayhem brought about by Bonnie and Clyde. Even the faces of the outlaws are purposely obscured throughout the entire film until the very end, revealing them as a couple of kids on a shooting spree.

It’d be too easy to categorize this film as a Western (since it deals with Texas Rangers) and yet it certainly has the elements of one—quiet men seeking justice, not following any kind of protocol, existing in a world of unspoken honor codes, and taking the law into their own hands. But reducing it to a Western genre would be a disservice, not only to the dazzling and expansive cinematography (which at times is reminiscent of the singular and beautiful work of Néstor Almendros) as well as the profound performances of both Costner and Harrelson as the lead characters.

Costner portrays Hamer as a loner, serious about justice, with no qualms about killing any perpetrator. His focus is solely on the innocents who were killed and isn’t interested in how the outlaws are supposed to be captured. Gault’s also concerned with justice but he audibly asks existential questions along their journey, whereas Hamer’s interiority comes through his body language and silence. When Wade McNabb, one of the members of the gang gives clues to Hamer and Gault of Bonnie and Clyde’s whereabouts, the rangers find him dead shortly after. Gault wonders whether they could’ve protected him but Hamer isn’t interested in this reflection. “He made his own choices,” Hamer responds.

This is an interesting turn for Harrelson, especially since he played an outlaw himself in Oliver Stone’s Natural Born Killers (1994). Here, Harrelson takes the role of a philosopher/preacher who wonders about the nature of justice and what killing another human being does to the core of one’s heart and mind.

Costner’s Hamer is not without thought. On the contrary, he remembers and reflects but his conclusions have reached a certainty, which Gault doesn’t see. Hamer is the lawman, a character of the quiet rumbling of an uneasy past. Part of this is also Hancock’s treatment of masculinity. Both Costner and Harrelson bring into the foreground the essence of what it means to be a man (certainly in this context)—that need to wander, to accept restlessness, to conquer, and that thrust in always being on the lookout for justice.

And yet this isn’t some ideological quest relating to our current cultural crisis. Hamer and Gault may be rough and hardy but the depth of their humanity transcends the endless categorization of gender identity we see today. There is no “masculinist” or feminist agenda. Kathy Bates’ “Ma” Ferguson is not some feminist icon since she’s a female governor, and neither is Bonnie Parker. These are simply people, certainly distinct from one another, but their human imperfections lead Hancock to explore and affirm the significance of human condition and experience that transcends politics, ideology, and gender identity. It’s a meditation on the nature of justice and evil as seen through this true American story.