Into the Badlands Loses Its Way

It had enormous potential. 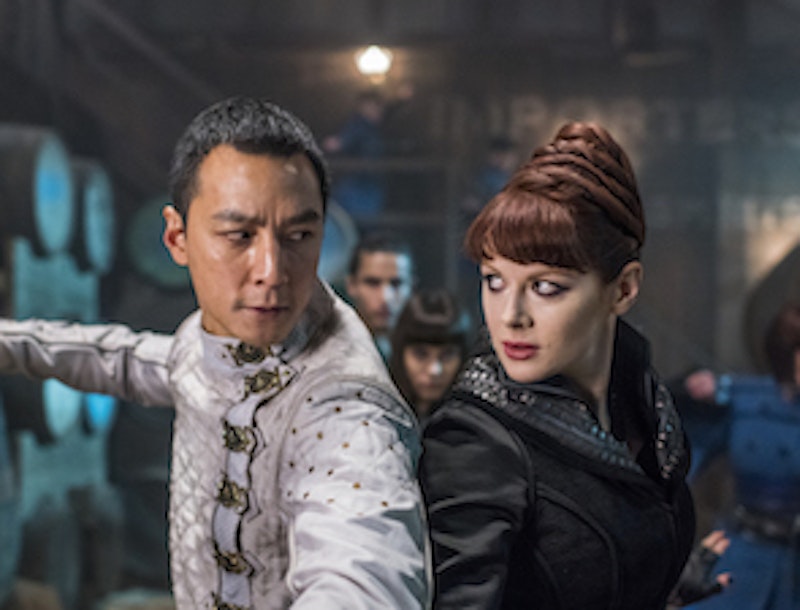 When I was in high school, I loved Groo the Wanderer, a comic book series written and drawn by the Spanish-Mexican illustrator, Sergio Aragonés, who’s sometimes better known for the tiny illustrations he did in MAD magazine called “marginals.” Groo spoofed the sword-and-sorcery genre made popular in the 1980s by Dungeons & Dragons, Arnold Schwarzenegger’s Conan movies, and a raft of suburban mothers campaigning against role-playing games, convinced that childhood imagination was the left hand of Satan.

In every issue of Groo, Aragonés directly reversed the genre’s overheated pulp formulas and macho 1980s action-film posturing. It was like he hated everything about sword-and-sorcery and set out to destroy it from the inside. The series was so inventive, so funny, so dedicated to absurdity and, at times, so unflinchingly cruel to its protagonist that it was hard to read another fantasy novel or watch another oiled bodybuilder swinging a sword without laughing.

It was my first exposure to satire and spoof as creative modes. Groo was fat. Obsessed with cheese. Whenever he got on a ship, it’d sink. He was an idiot. And though people cheated and abused him wherever he went, he was optimistic and positive, a bumbling collision of Gomer Pyle, Gimpel, and Don Quixote with a fool’s luck to keep him safe.

In a pop-cultural sense, Groo was the bane of B-action stars like Dolph Lundgren, who tried to copy Schwarzenegger’s success as a Conan clone in Masters of the Universe and probably would’ve pulled it off if Aragonés hadn’t already encouraged the genre to metastasize into self-parody. Dolph did alright for himself, but we don’t think of him when we think of sword-and-sorcery barbarian heroes.

Most of us still think of Arnold. And some of us likely think of Groo because, through a humble comic book, Aragonés taught an important writing lesson to a generation of young readers: take the formula, the genre boundaries, too seriously and the story turns into a cliché, a parody of what it pretends to be. Unfortunately, the writers of Into the Badlands didn’t learn that lesson. And what could’ve been an impressive TV series has become, in its third and last season, a trite derivative of other franchises.

Into the Badlands is an AMC series that began in 2015. It had enormous potential. As a wire-fu Game of Thrones with steampunk elements, it distinguished itself through good pacing and clever cliffhangers, atypical character arcs, tightly scripted scenes, solid acting, and visuals imported from a wide spectrum of adventure films, role-playing games, and graphic novels—at least in the beginning.

The fight sequences—flamboyant and engaging at first, though eventually repetitive and boring—were on par with those in Hero or Crouching Tiger, Hidden Dragon. And the ensemble cast was well-chosen, not only for their capacities as individual actors, but for the pop-cultural types they could suggest. Everything in the show conspicuously references something else.

One can’t help but see a parallel between characters often portrayed by young Jackie Chan and Daniel Wu’s “Sunny,” the deadliest kung-fu killer you’ve ever met with a heart of gold. Nick Frost makes an appearance in season two as a kind of grinning Shaolin Friar Tuck. And Marton Csokas’s brain-damaged “Baron Quinn,” played as a bloodthirsty-yet-urbane southern plantation owner, is outstanding.

So what’s not to love? Even if the series was overburdened by too much pop-cultural intertextuality and geek pandering, it was still idiosyncratic and energetic enough as a work of dramatic fiction to move forward without toppling into parody. That is, until the adolescent tirades, hackneyed twists, uninteresting sub-plots, and stock quiet moments of the third season.

Although Into the Badlands was advertised as a “genre-bending martial arts series,” in the end what got bent was the show’s core premise. Instead of a fresh adaptation of the Chinese folktale, Journey to the West, which was the seed idea of the series, Badlands defaults to type, its high-wire dance between brilliant synthesis and satire-worthy ridiculousness stumbling painfully into Groo territory more than once.

As of this writing, season three is only half-released, with a fourth season already cancelled. Maybe this is why the writers chose to switch on the dramatic autopilot, giving us something more like Arrow or Vampire Diaries or one of the unfortunate 16-episode mistakes of The Walking Dead.

This season, we’ve already encountered crazed cultists from central casting bent on destroying the world; a two-dimensional hectoring ex-wife as fodder for Frost’s not-so-funny comic relief; the protagonist-killer having a protracted Mr. Mom experience caring for his baby to remind us that he really isn’t such a bad guy after all (as he dispatches entire stadiums of faceless stormtroopers in the most bloody ways possible); and a crossbow sniper scene cribbed straight out of Saving Private Ryan.

We don’t actually care about the story’s Anakin Skywalker, M.K., who’s the usual urban fantasy “troubled teenage boy with a supernatural gift.” When he has a meltdown and tries to demon-kung-fu Sunny into the afterlife, the entire scene amounts to nothing more than a shrug. At least Anakin and Obi-Wan had a bitter you-never-loved-me-dad shouting match toward the end of their lightsaber duel.

I want to like Into the Badlands, but I think the satirical metastasizing is already underway. I want to un-see Chipo Chung, as the head master monk, looking up from her meditation and saying, “It has begun.” I don’t want there to be a group of ninja assassins named “The Black Lotus.” And I don’t want lines like “Something dangerous is coming,” because something really isn’t. Only good non-clichéd writing will make us worry about the characters.

Part of me hopes that the second half of the last season will rehabilitate the show, but I think it’s unlikely. When Sunny is induced into finally turning on the doomsday machine in the 1950s-style post-apocalyptic missile silo with esoteric runes out of Blade all around the ceiling, we’re left with a sense of artificial ominousness. The diminutive 2001 monolith lights up like a Spinal Tap concert set (“The Wee Cultists of the Monolith,” perhaps?) and I start to giggle. It’s Groo all over again and the ship’s about to sink.