French Exit is blindingly awful, belonging to the same canon as Life Itself, Collateral Beauty, The Happening, and The Wicker Man remake. 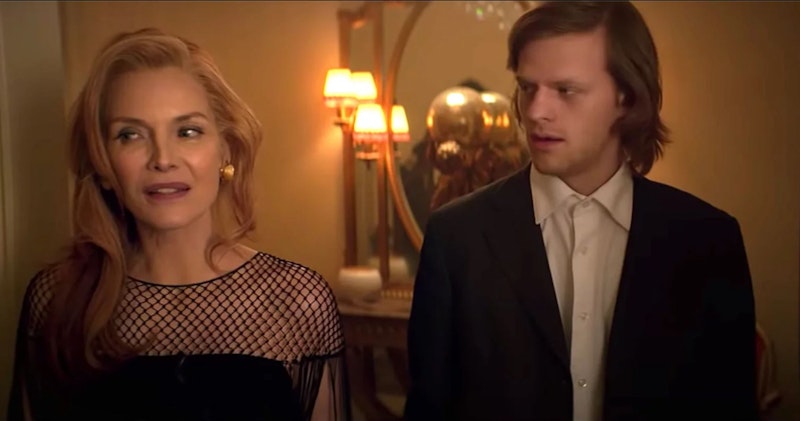 I missed French Exit during its brief theatrical run (only a couple of months ago), and I wish I saw it with other people who can’t look away from horrible accidents. This is the ultimate runner, a movie so blindingly bad that it makes the case for you that you should turn it off or walk out. But I haven’t seen a lot of new movies recently and this one is, on the whole, not boring. I have no higher praise, but to be fair, the most important part of making a movie is making sure it isn’t boring. I recognized director Azazel Jacobs’ name in the opening credits, and only now realize he’s also responsible for The Lovers, one of the worst films I saw in 2017. That was a boring movie.

French Exit was written by Patrick deWitt, who also wrote the source novel. But like The Lovers, the dialogue is so overwrought that it becomes unspeakable and absurd. Wikipedia describes this as a “surreal dark-comedy”—I don’t buy it for a second. This is an earnest story about an ice queen mother with champagne taste, a rich dead husband, and a son neither of them ever cared for. Michelle Pfeiffer plays Frances Price, introduced walking into a fancy Northeast prep school and pulling her son out defiantly after he’s been expelled. “So what do you want to do with your life?” Unfortunately, what follows is not The Goldfinch caliber (not even the movie). Lucas Hedges plays Malcolm Price all grown up, 12 years on just as the late Mr. Price’s money has run out. Urged to visit Paris by sea—she “knows” that she’s going to die there—Frances brings stacks of cash, clothes, cigarettes, a black cat, and her poor, put-upon son.

Nothing wrong with the setup, but when the director and the writer (the only people credited besides the leads in the opening credits) see nothing wrong with lines that may work in a book but can’t be delivered by living human actors—“Something set up an alert, it was a presentiment of what was to come;” “There’s a goodly part of me that wants to set this building on fire;” “I’ve never been so hurt as when I saw your face for the first time;” “I’ve always been unlucky, but I have a sense that this will change suddenly and permanently;” “It’s such a cliche isn’t? Someone killing themselves after the presentiment has passed;” “Do you know what a cliche is? It’s a story so fine, that it’s grown old in its hope for retelling.” That’s just from the trailer.

Jacobs’ and deWitt’s film belongs in the same canon as The Happening, The Wicker Man remake, Life Itself, and Collateral Beauty. Earlier this year, I wrote about Eat Wheaties!, another film that belongs in that group. But Eat Wheaties! is really disturbing. Life Itself and Collateral Beauty are insane, colossal failures. French Exit shares their uncanny air—more like a lack of oxygen, because watching these actors, all more than capable, work in this movie is like watching puppets go dead. They’re left out there without a net, and despite what the filmmakers or press releases say, French Exit doesn’t play like a comedy.

The closest comparison is Synecdoche, New York, where characters are also very direct and rude. Besides everything else going on in Synecdoche, it’s constantly needling and antagonizing and undermining its main character. Charlie Kaufman manages to balance blistering black comedy, surrealism, and true pathos in those two hours, whereas Jacobs and deWitt hover in a familiar zone of mediocrity, offering nothing new, surprising, or clever in the structure of their movie or their characters’ development. There’s the pro-forma “real moment” between the distant mother and the detached son, there’s an attempt to bring together the motley crew of people that Pfeiffer’s character has berated and insulted throughout as a new kind of ad-hoc family for otherwise lonely people. I don’t buy any of it, and I’d really like to talk to someone who does. Or examine them.

At the same time, I couldn’t help thinking about how French Exit would play to a non-English audience. deWitt’s screenplay plays as stilted, untreated prose, and Jacobs directs without any comedic sense or dramatic effect. And what translates the worst? Comedy, and the particulars of language—perhaps, like Kurosawa and Fassbinder and Fulci and Sissako—this is a movie that will work better subtitled. It certainly looks good: cinematographer Tobias Datum knows how to light and fill a widescreen anamorphic frame, and his work his striking, even if he’s left out to dry along with the actors.

A final word of thanks to the filmmakers for introducing me to Valerie Mahaffey, who plays one of the insane loners that the Prices’ befriend in Paris. As soon as she appears, French Exit becomes bearable—not for long, but her performance goes a long way. After Pfeiffer insults her just like Catherine Keener in Synecdoche, she just takes it—it’s heartbreaking. She reminds me of Shirley MacLaine in The Children’s Hour, or even The Apartment. An extraordinary performance, the only survivor of French Exit.