There’s material for one of the great horror movies of all time. Mosquito State isn’t that. 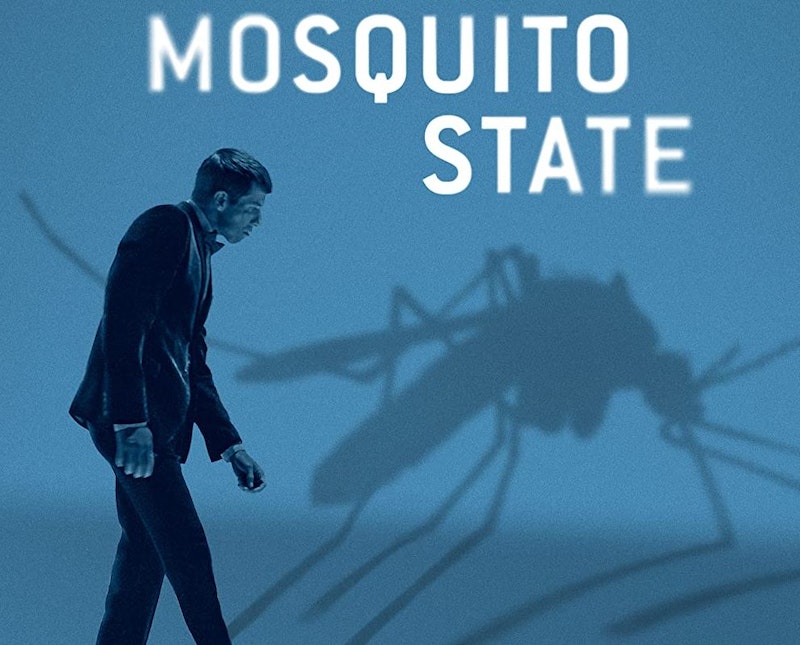 The opening credits of Polish filmmaker Filip Jan Rymsza’s Mosquito State constitute a small masterpiece. Over Cezary Skubiszewski’s score of ominous drones and insect-like buzzing, the camera shows repulsive close-ups of the mosquito’s life-cycle; larvae, pupa, adult, each wetly jerking and pulsing, pulling itself from the water and up into its final, blood-sucking, multi-legged form. At each stage, there’s a moment of freeze frame, when the vile life you’re looking at is caught and transforms into a brown-orange anatomical drawing, still repulsive, but now flattened, memorialized and catalogued. It’s a kind of thumbnail, brilliant metaphor for the horror genre itself, which zooms in on the disgusting, the ominous, the dripping ichor and the hunger in order to aestheticize them all.

The rest of the movie (out August 26 on Shudder) can’t live up to the unexpected vivid specificity of that intro, unfortunately. Rymsza’s plot is timidly familiar and timidly vague. The movie, set shortly before the financial crash of 2008, follows neurotic and possibly autistic stock analyst Richard Boca (Beau Knapp) as he’s consumed by three obsessions: the worry that his miracle market model Honey Bee no longer functions; a crush on attractive wine-store manager Lena (Charlotte Vega); and the breeding and care of mosquitoes. The last involves putting out water for the mosquitos to breed and fruit for them to eat. It’s indicative of Richard’s mental collapse.

Cronenberg’s The Fly is an obvious influence buzzing around. Ballard’s Hi-Rise lurks with its ominous sleek lines around the corner from Richard’s palatial modernist apartment. David Lynch waits in the characters’ pregnant pauses, and in the film’s arty refusal to commit to an ending.

That last is more a failure of imagination than like a profound ambiguity, and the homages don’t push a proboscis into any new, congealed vein. The movie swats at the idea that mosquitoes are battened on humans as humans are battened on the ecosystem. It lands and then flies off the idea that the movements of mosquitoes, like the movements of the market, are opaque, stochastic, and hungry. But all the news reports on television feel more like background noise than meaning.

As with the opening, the movie succeeds best in images. A close-up of a mother mosquito birthing wet eggs recalls the laying scene in Aliens, though the real-life example surpasses the large-scale FX in visceral ugliness. As mosquitoes fill Richard’s apartment, he’s repeatedly bitten. His face swells up grotesquely and in semi-nude scenes you see raised welts and knots across the rest of his body. Vampire films have long established that giving yourself to the monster makes you the monster, but few have so cleverly visualized the transformative results of having your blood consumed.

There’s a disturbing fascination in scenes of the mosquitos coating Richard as he lies in bed, or coating the windows of his apartment, or flying about in mesmerizing, horrifying cloud patterns in his room. No animal is more deadly to humans than mosquitoes, as a television news-caster reminds us. When they buzz about our arms, or our necks, we’re prey watching our predators circle.

There’s material for one of the great horror movies of all time. Mosquito State isn’t that. Still, commend Rymsza for recognizing the potential, and for, at least intermittently, drawing blood.