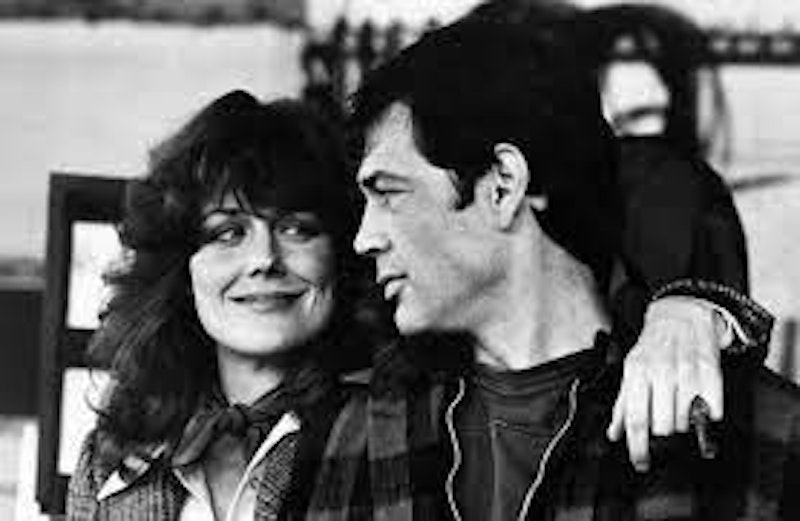 At a gas station on the way to San Luis Obispo, a willowy British brunette has car trouble. A rugged, handsome man in a van pulls up and teases her about not knowing how to fix it. She calls him a pig, but needs a lift. It’s not obvious these two will eventually fall in love. In the van, we learn she’s a writer, New York stuff (psychiatry! literary!), but the recent death of a stuntman on the set of a local action picture is the subject of her next feature, one with the goal of understanding a profession largely seen to be consisting of people who, outside of Stunts, are sad and boring! “Interesting idea, lady,” says the man played by Robert Forster. “Really?” she says. “No, but then, I’m a stuntman and that vain reckless bore you described as having gotten killed—that was my brother.” She reaches for the radio dial, turning up cornpone country.

Mark L. Lester’s film is full of terrific moments like this. What I’ve left out is the beginning: a helicopter stunt, gone dead-wrong. Why and how? Forster comes on to investigate. Almost everyone’s excited to see him—but the stuntmen keep dying. The death of Crispin Glover’s character’s dad prompts Joanna Cassidy to annihilate an entire bar, while the house band, reheated Eagles’ roadkill, don’t miss a beat.

Forster’s dead brother was sleeping with the leading lady, the wife of the nebbish producer and the daughter of the guy running the studio. A telling moment comes when the producer calls his father-in-law—an overweight man in gold chains, thatch of hair protruding out of an unzipped track top, on the brink of a ménage à trois—to complain about their marriage!

Along with the producer, another suspect emerges: platinum blond hair, piercing blue eyes, mangled straw fedora, and a rumpled tweed. It’s special effects guy/phantom Pete Lustig (Richard Lynch). You might think he was a freebase burn victim; I believe that’s the case. It’s gratifying to see him handling a blowtorch here. An enjoyable moment finds him on the edge of herniated collapse, screaming, “The carabiner clip!”

Though many sincere attempts at tawdry gags do strain, I was mostly reminded of The Love Boat. The movie concludes with Forster recreating the stunt that killed his brother. We expect this, but it’s still bracing. Stunts is Forster’s movie, and he really doesn’t have to do much except stand by his principles in the same pair of bellbottoms.