Eat Wheaties! is a bizarre and sad movie. 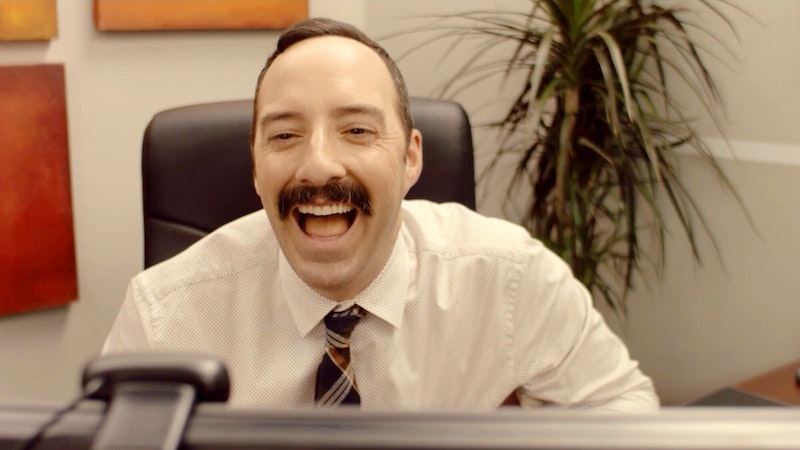 Sometimes there are movies that’re so blindingly bad, misbegotten, and technically dysfunctional that they become comedies of the uncanny: Collateral Beauty, Life Itself, Here Comes the Boom, Five Feet Apart, and Wonder Woman 1984. These are a few recent examples, but one doesn’t have to be a movie buff to know, first- or second-hand, about the hilarious failures of The Happening, Knowing, and The Wicker Man remake in 2006. I don’t consider Rules Don’t Apply, a Warren Beatty movie about Howard Hughes that barely anyone saw and lost millions of dollars, a failure—it was as good as Martin Scorsese’s Hughes biopic The Aviator, but it belonged to the 20th century: Beatty-as-brand, Beatty as selling point, but movie stars don’t guarantee profits anymore.

Things change in American movies, but there will always be movies as strange as Eat Wheaties!, a new comedy written and directed by Scott Abramovitch and starring Tony Hale (Arrested Development). I’m not sure how much of a dark movie Abramovitch wanted to film—and that’s precisely what makes Eat Wheaties! so unsettling. Hale plays Sid Straw, an office drone employed in the field of…? (Promising Young Woman had a similarly indifferent and bland world in which its main character operated, a limbo of Baudrillardian America. Both movies, it must be said, were written and directed by foreigners: Emerald Fennell is British, while Abramovitch is Canadian).

Straw is a put-upon white male with no social graces and even fewer friends: not even his relatives like him. Elisha Cuthbert plays his pregnant sister (who remains ready-to-pop throughout the many months in which the film takes place), and she openly mocks him throughout the film, her scorn so over the top that one can’t help but imagine her bullying him as a kid, a scrim of resentment hiding real hate. Straw’s co-workers aren’t as hostile, but they’re thoroughly indifferent to Straw, and try to avoid him as much as possible. Everyone in Straw’s life is like this: even pseudo-friend Duncan (Alan Tudyk, a bootleg Michael Douglas) is just there to remind us how pathetic and sad Straw is—as a man, a worker, a brother, a lover, a friend. The world that Sid Straw occupies isn’t just indifferent to his existence—this place hates Straw, and appears determined to crush him, or even worse, drive him to mass murder.

Eat Wheaties! is a particularly creepy movie because it remains unpredictable for all of its 86 minutes. Abramovitch’s script, his first feature, has a lot to do with that: besides never finding out what exactly Straw does for a living, the misunderstanding that drives the plot is written silly but played serious, with little of the snappy timing and editing required in comedy. Straw claims he went to college with Elizabeth Banks, and we believe him, but no one else does. Of course we're conditioned to expect some kind of appearance or cameo from Banks, likely for five minutes at the end. But we don't even get that: Banks leaves Straw a voicemail that plays over the end credits. Her absence in the film reinforces its hostility towards Straw and his goals.

No matter: this all just makes the movie even more difficult to parse (what a relief to watch something new and be completely puzzled). Straw apparently also missed out on the phenomenon of Facebook, another inconceivable detail, especially considering the median age of Facebook users now.

Straw’s incompetence extends beyond the social: he struggles to open an account, use a webcam, and fails to recognize the difference between public and private messages (he starts writing letters on Banks’ public page wall—nothing lascivious, just inept). Incongruous details like this pile up so fast that Eat Wheaties! often feel closer to Joker and One Hour Photo than something like The 40-Year-Old Virgin, which its poster references. Banks’ agents come into contact with Straw after he requests a signed headshot, and he’s slapped with a temporary restraining order after his public-private “letters” go viral.

Everything comes crashing down: he loses his job, can’t get another one, and, worst of all, is removed as co-chair of the West Coast reunion of his college class. Again, this all sounds so much darker than it comes off, and this is what makes Eat Wheaties! more disturbing in practice than something superficially similar dealing with “lonely white men.” The score and soundtrack are all anonymous muzak, the sound of Xanax we hear every day piped into the PA systems of pharmacies and public places around the world. It’s the sound of insurance and pharmaceutical commercials, which also depict a sterile and plastic world so close yet so far from our own. Now imagine a movie not only occupying that world but drunk on it—Eat Wheaties!

The title is a bit that the fictionalized Banks would yell at the Penn football team: “Did you eat your Wheaties?” Straw insists that “eat Wheaties” is a kind of monad that will unlock Banks’ gatekeepers and bring him back to his former status as… Vice President of something-or-other. Everyone in the movie, family and friends included, regard Straw with the suspicion of a mass shooter or a nutcase in the making, much like Promising Young Woman, and their behavior begs the question: what were the many years leading up to this like? Straw’s parents are aliens, unaware of their son’s obvious personal problems and always smiling, full of empty encouragement. John Slattery plays a particularly lobotomized Senior Straw, although his blank characterization doesn’t quite reach the Seroquel stare of Jennifer Coolidge as the mother in Promising Young Woman.

Both of these movies torture their protagonists without meaning to, and they veer into narrative vertigo, with so many elements clashing and alienating the viewer more than any of the writing or acting. Hale’s performance is good, a Buster Bluth reprise it may be. I’d like to see Hale play a criminal or a male prostitute—I’d like to see him stretch his abilities. In Eat Wheaties! it’s more of the same, though Straw is slightly more aware and “together” than Buster Bluth. Still, his inability to recognize basic flaws and problems in his daily way of living, together with somewhat competent conversational abilities, create one dissonance among many in this strange, strange movie.

Banks’ agency, unbeknownst to her, persecute Straw to the point that he ends up in court, a marble-mouthed Josef K. on the stand. The movie ends in a courtroom sequence with the fidelity and frivolousness of a screwball comedy, without any of the snappiness in the editing or direction. The performances are fine (Gita Reddy is particularly good as the judge), but again the technical aspects of the movie become apparent when they should be invisible. This makes Eat Wheaties! even more unsettling and perversely memorable than it would’ve been otherwise.

I don’t know how this was produced with these people and that much money—it reminded me of a Classic Hollywood era programmer tossed off in 10 days and made to be shown in second runs and “neighbs” where film would play all day. Watching some of those movies today, like the four Nancy Drew films starring Bonita Granville, can be startling, because it’s so rare to see actors and filmmakers from this period “having fun” and essentially fucking off on camera in a way we’d recognize today as familiar and, frankly, overplayed at this point (Apatow is damned).

Eat Wheaties! is a sad movie. Sid Straw isn’t charismatic, but he’s not stupid, and the way Hale plays his dejection and constant defeats, rebuffs, and failures has real pathos that, I imagine, could be put to use in other films as well. Enough funny stuff: play Josef K. Find someone that will remake The Trial and make Hale play Kafka’s supreme hero of persecution. He’d be perfect. The Trial is a grand masterpiece of paranoia, but it’s a fantasy, in the novel and in Orson Welles’ brilliant 1962 film. Eat Wheaties! is another fantasy world that’s trying to recreate our reality, or some form of comedic realism with just enough pieces and details missing to make it uncanny and, again, unpredictable to the very end. On that point, I recommend Eat Wheaties! It’s more thrilling than any episode of 24, and Elisha Cuthbert is funnier when she’s mean (and pregnant).