The Ruling Class is convoluted and dangerous, and never loses sight of its satirical aims. 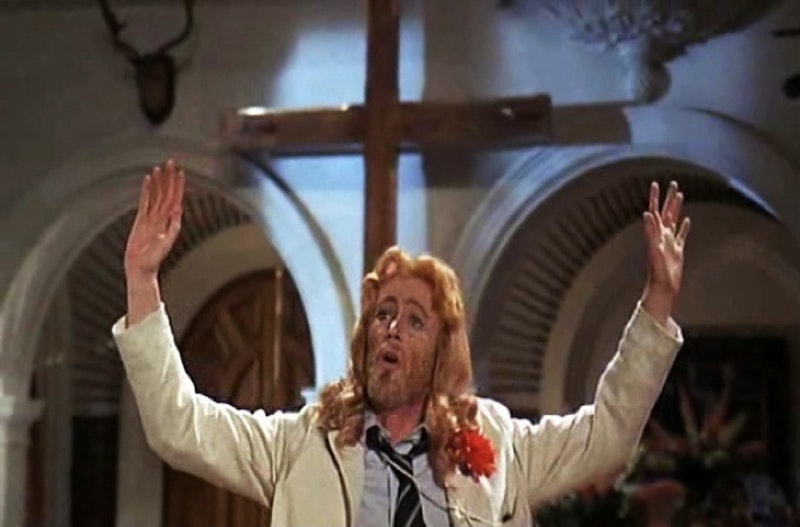 The Ruling Class is a forgotten masterpiece of British cinema. Starring Peter O’Toole and an array of first-class British character actors, it came out in 1972 to mixed reviews. It was never a commercial success. It’s daring, innovative and bleakly humorous. It mixes genres and styles, combining opera with pop, high art with low humor, dazzling sets with clever editing. It breaks out in song and dance at regular intervals, which makes it both entertaining and disturbing. There’s an air of controlled insanity about the whole production.

This is underlined by the plot. The 13th Earl of Gurney (played by Harry Andrews) dies in a bizarre accident while practicing auto-erotic asphyxiation, wearing a tutu, a British military uniform, and a sword. He’s a hanging judge. He leaves his entire estate to his son Jack, a paranoid schizophrenic who thinks he’s God.

It’s worth quoting the opening words of the film, as delivered by the 13th Earl in a speech to the Society of St George (a real-life patriotic organization), as this sets the tone for the movie: “The aim of the Society of St George is to keep green the memory of England. We were once rulers of the greatest empire the world has ever known; ruled, not by superior force or skill, but by sheer presence. I give you England: this teeming womb of privilege, this feudal state, whose shores beat back the turbulent sea of foreign anarchy, this ancient fortress, still commanded by the noblest of our royal blood, this precious stone set in a silver sea…”

After which a toast is raised: “To England, this precious stone set in a silver sea.”

The title sequence is played over a rendition of the national anthem. But not the well-known parts. The least-known verse:

God save our gracious Queen,

Scatter her enemies, and make them fall.

On thee our hopes we fix,

God save the Queen.

As Lord Gurney gets out of his Rolls Royce on the driveway of his spectacular mansion, he’s greeted by his butler, Tucker (played by Arthur Lowe) who asks how the speech went?

“Went well Tucker. Englishmen like to hear the truth about themselves.”

The acting throughout the movie is impeccable. It’s over-the-top: teetering on the edge of parody, but never quite falling over, and captures the essence of the British ruling class. Every performance is a marvel of expression: from William Mervyn’s Sir Charles, Jack’s pompous uncle, to Alastair Sim’s swivel-eyed Bishop, the parts are played with relish and a peculiar kind of intensity. As British subjects we know these people. We’ve been subjected to their absurd pomposity, their inane sentimentality, their assumption of leadership, the whole of our lives.

Best of all is Peter O’Toole as the alternately fragile and elevated Earl. He plays him as a stoned-out hippie and there’s at least one reference to Timothy Leary, which reminds us of the period in which the film was made.

It’s full of some of the best lines you will ever hear in a movie.

"How do you know you're God?" the Earl is asked by his eager aunt, early in the film.

"Simple,” he replies. “When I pray to him I find I'm talking to myself.”

The film’s target is, as its title affirms, the ruling class. But not any old ruling class: the British ruling class. No, I take that back. “British” is too broad a word. The British Isles consist of England, Ireland, Scotland and Wales, plus a host of smaller islands, but they’re decidedly ruled from England. It’s the English ruling class we are talking about: once the rulers of the world.

Ever since the 1960s, working-class culture had been on the rise. Music was dominated by bands like the Beatles, the Kinks and the Who, working-class lads from the cities. Acting was dominated by working-class actors, like Michael Caine and Terence Stamp, photography and art by David Bailey and Peter Blake, literature by Alan Sillitoe and John Osborne, theater by the likes of Joe Orton, television by Galton and Simpson and Johnny Speight. Even O’Toole was working class, despite that plummy accent of his. Everywhere you looked there were working-class heroes to aspire to and emulate.

So great was the cultural eclipse of the old ruling class that they began to affect working-class mannerisms. Privately-educated Tony Blair, later to become Prime Minister, famously adopted a glottal stop, the replacement of the letter T with a throaty glug, typical of the Cockney accent. Prime Minister David Cameron feigned support for Aston Villa football club.

But it wasn’t to last. The ruling class are back, not only ruling the country, but ruling the arts too. It costs money to buy the equipment to become a pop star. Working people can’t afford it. It costs money to go to art school, to drama college, or to university, and the old grant system has been replaced by loans and fees. You have to pay to get educated these days. There are very few working-class actors, writers, artists or musicians left. It’s the upper classes who dominate our screens and our lives, infiltrating themselves into our consciousness.

The toffs are back on top, more corrupt than ever, fiddling the welfare state to send money to their peers, controlling the airwaves, the flow of news, to keep the proles in ignorance, writing the op-eds in the major papers; running the government, running the economic system, running the justice system, for themselves. And they no longer try to hide where they came from.

Listen to Boris Johnson’s accent. It’s pure Eton-educated superiority, full of huffing bravado and Latin quotations. Johnson doesn’t try to hide his privilege. He revels in it. He wants you to know he was born to rule. He’s exactly like the pompous Sir Charles in the movie. He’ll stop at nothing to maintain his political and economic ascendency.

Unfortunately, the ruling class aren’t so easy to remove. Get rid of one lot, and another soon move in to take their place, as the Russians and the Chinese have found to their cost. It’s something inherent in human nature: the desire to dominate, to draw in power for yourself, to steal people’s labour by any means, to feel superior to other people, to want other people to serve you.

The political structure of the world is similar in a way to the psychological structure of an individual. Just as the ruling class rules the economic sphere, so the ego rules the psyche. Just as the ruling class sees itself as the center of the world, so does the ego. We all see ourselves as superior to other creatures, to other human beings, to other denizens of the biosphere. Likewise, the ego dominates our thinking. People lack imagination, empathy and curiosity. They lack creativity. They lack love.

We live within self-reinforcing bubbles of our own illusion. That’s most of us now, with maybe a few rare exceptions. We’re all subject to the ego, which is why the ruling class can dominate us. They know we lust for power, just as they do, so they offer us the illusion of power. They appeal to all that is base and mechanistic in the human psyche. They play upon our weaknesses, our desire to be as they are. We may not want to be Lords of the Manor anymore, but many of us would be celebrities. We dream of winning the lottery, of becoming rich, of being on TV. Therein lies our predictability and our downfall.

It’s the ego and the ruling class between them that are pushing the human race to the edge of extinction. In order to restrain one we have to put constraints upon the other. The opposite of the ego is the community. The community is the place where the ego can be welcomed, then involved. The community not only of all humanity, but of all life too. It’s not political action we need, but community action. It’s not political parties we need, but street parties. We don’t need to grow the economy. Let’s grow our communities instead. The opposite of the ruling class is also the community. Perhaps both problems have the same solution.