Shiva Baby is a triumph in direction, pacing, and advertising (that poster!). 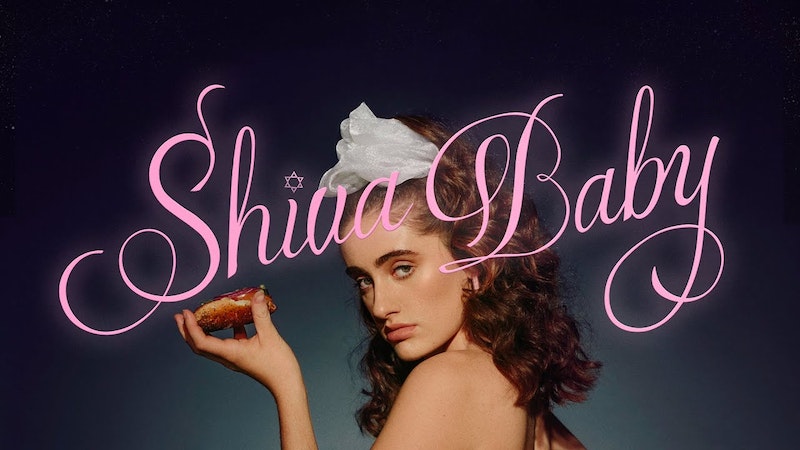 If you know about Shiva Baby, you saw the poster first. A brilliant piece of advertising: Rachel Sennott in a white dress of cream cheese adorned with bagels, lox, and even a crown. If you haven’t seen the movie, you’ve seen the poster—even in a year with “no movies,” Shiva Baby managed to crack the cultural consciousness purely through canny marketing and an excellent, potentially iconic image. I was talking to a friend of mine and when I brought it up, she not only knew the poster, but the synopsis and lead actors. This isn’t someone who pays attention to new movies necessarily, especially ones they never made a point of seeing. It reminded me of opening newspapers on the weekend and the feeling of seeing full-page spreads for movies with great posters and bold declarations.

There are no big pull quotes or declarations on this poster. Sennott and the cream cheese dress do all the work. I admire writer/director Emma Seligman and her distributors for not only figuring out how to sell this movie but for making it go viral in a measurable way. Shiva Baby contains no proms, no weddings, no dresses, no mountains of cream (just mounds), nor is it a typically whimsical coming of age story set in a Jewish milieu about a young woman finding her way in the world. This is a bottle film. Seventy-seven minutes in two locations: Danielle’s (Sennott) sugar daddy’s apartment, and her aunt Sheila’s house for the shiva. Danielle’s mother (Polly Draper) gives her the “soundbites” for relatives, friends of the family, acquaintances of former friends who have since passed on to their Eternal Rewards, all before Danielle asks, “Wait, so who died?”

The shiva is a setting for Danielle’s life to come together and combust. Her sugar daddy Max (Danny Deferrari) shows up with his shiksa wife Kim (Dianna Agron), and their daughter, both of whom are a surprise to Danielle, who also learns that her sugar daddy is in fact a kept man—Kim’s paying for that SoHo pied-à-terre. Along with them, her former classmate and ex-girlfriend Maya (Molly Gordon) shows up unexpectedly, and though they’re tense at first, the escalation of sexual and social malfeasance quickly puts their friendship in perspective. Danielle’s parents (Fred Melamed plays her dad, and like Draper, he’s a riot) predictably can’t stop pestering her, and remain none the wiser about her daughter’s various dalliances even while the charade collapses before the cold gaze of the shiksa holding her precious baby. Oh, the circle of life!

What’s striking about Shiva Baby is how contemporary it feels in the same way as Booksmart and Eighth Grade: unpretentious and largely non-patronizing movies about young woman in social and sexual situations that American cinema has traditionally reserved for young men. Ben Stiller zippered his balls and got cum in his hair in 1998, but women have never had an outlet for the same kind of vulgarity and honesty. Shiva Baby isn’t a giant statement, far from it—Seligman takes an age-old premise and manages to make it exciting and interesting not primarily through its endlessly enjoyable Jewish milieu (Jackie Hoffman, like Melamed, is another character actor you’ve seen a million times)—but its rhythm and its performances.

Keep in mind, a lot of the acting in this film is wordless: facial expressions and glances exchanged from across a crowded room. Seligman’s direction is airtight and her juggling not only of the four principals (Danielle, Molly, Max, Kim), but Danielle’s parents and all of the other yentas clogging up the house. Whoever died is barely mentioned, if at all, and otherwise corny or inarticulately earnest speeches are eliminated in favor of actions, like a sudden kiss, or a bend of the knee, or those crystal blue shiksa daggers that jut out from the “Malibu Barbie” alien at the otherwise totally tribal party, I mean shiva. Absolutely nothing bad can happen when you put on Shiva Baby, you will only have a good time. Unless you are anti-Semitic.