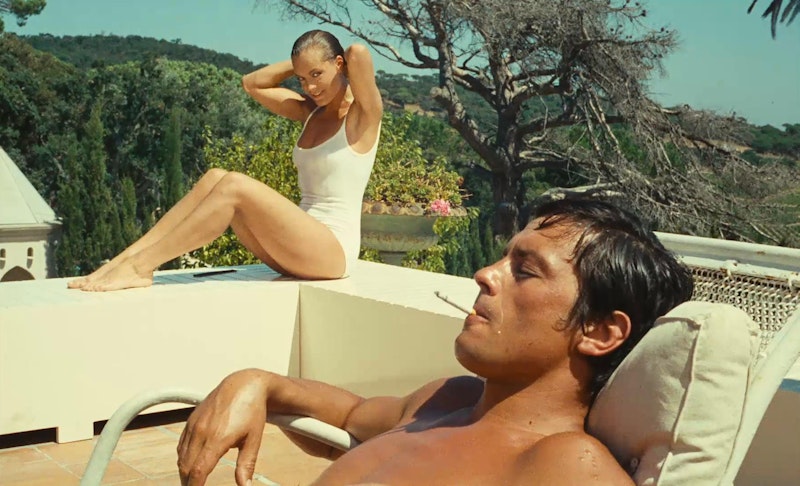 It’s often said that evil lurks in the most beautiful places. Such is the case in Jacques Deray’s La piscine (1969), a slow-burn, psycho-erotic thriller, 4K restored and released by the Criterion Collection last month (as to be expected, there are many extra features, such as interviews with Alain Delon and Jane Birkin, 50 years later; original footage of the filming, as well as publicity footage of the film; an English version of the film and alternate endings).

Jean-Paul (Delon) and Marianne (Romy Schneider) are a couple vacationing in a friend’s villa on the French Riviera. The villa comes with a gorgeous swimming pool, which Jean-Paul and Marianne frequently use. In fact, there doesn’t seem to be anything else to do but to sunbathe and swim. The pair are isolated from everything (except for the maid), and they are seemingly in love and happy together. The opening scene is direct: Jean-Paul’s sunbathing next to the pool, Marianne arrives, and they immediately engage in erotic play. Yet something is slightly askew. Their relationship shows signs of sexual imbalance, in which Jean-Paul is in control.

Marianne assures him that nothing happened, yet her eyes and body language say otherwise. Harry’s incomplete sentences, unspoken looks, and sun-soaked silences disturb the controlling balance of Jean-Paul. Penelope’s presence doesn’t help. Although all she wants is to rest with a book, she’s thrown into the world of jealousy and mature love that she hasn’t experienced before. She’s the innocent that ends up being defiled and, in some way, sacrificed, by the always-calculating Jean-Paul.

Harry’s an interloper, who’s both irritating and oblivious to Jean-Paul’s dark capabilities. He genuinely considers both Jean-Paul and Marianne true friends, yet his intentions with Marianne are far from honorable. There isn’t much to do, and this idleness contributes to dark thoughts, strange desires, and lack of existential purpose. Nobody really knows why they’re there, away from the problems of the world, enclosed in their own separate spheres, apparently free of pain and only open to pleasure.

The hints of Marianne and Harry’s relationship are mounting, as is Jean-Paul’s jealousy. He feels that Marianne’s slipping through his water-soaked fingers, and that the dynamic of their relationship is changing because of Harry’s unwelcome intrusion. The tension and meaninglessness reach the pinnacle in the film when Jean-Paul kills Harry by drowning him in the pool. There’s almost no passion in Jean-Paul’s eyes, and his hatred toward Harry is subdued, functioning only on a socio-pathic level. The deed’s done, and Jean-Paul covers his tracks well. But Marianne suspects him. The police suspect him too but are unable to prove that Jean-Paul committed the murder.

It’d be easy to claim that it’s only Jean-Paul who’s the primary mover of these dark dynamics. He’s not the only villain in the film because all four characters contribute to the oppressive atmosphere, despite the beautiful blue water and scorching sun. When Harry and Penelope arrive, it’s not only Jean-Paul who looks at her with the eyes of a predator, but Marianne too. They gaze upon her as if they have to approve of her in order to use her. Harry’s relationship to Penelope is strange too—one sometimes forgets that he’s her father, because he presents her almost as a sexual gift to Jean-Paul and Marianne.

The juxtaposition of the beautiful bodies and faces, especially with Delon and Schneider, with the darkness that lies beneath drives much of the film. Delon and Schneider reunited as actors with La piscine, and were previously in a relationship. The subtext of the real-life lovers is impossible to ignore and there’s no doubt that the wild chemistry between Jean-Paul and Marianne would only have been possible through Delon and Schneider.

Schneider grew into her career as a bona fide actress. To say that Delon is stunning in both looks and interior intensity is an understatement. He plays Jean-Paul as a calculating, revenge-bent man, whose gorgeous looks hypnotize. It’s precisely this erotic magnetism that hypnotizes Marianne into staying to with him, despite the fact that she knows he murdered Harry. She resists and attempts to have the power over him, but Jean-Paul’s piercing gaze moves her in another direction. Although she now knows who Jean-Paul is, she remains with him, in an embrace that, for her, oscillates between comfort and fear.

There’s “evil under the sun,” and La piscine’s aesthetic sensibilities as well as erotic possibilities reveal that sun-soaked idleness and isolation from the world tend to lead into inward movement toward the self, without the regard for the other. The swimming pool isn’t the cause of the darkness that occurs in the film, but a vehicle for the twisted desires that are awakened by the abrupt break in time and space. The passing cars on the undulating roads of the French Riviera still exist despite the physical isolation of the characters. Ultimately, it’s their metaphysical isolation from their very selves that proves to be fatal, and the interior conflict is where the real reckoning happens. All that’s left is the burden of memory: the scorching sun, the blue water, and the silence.