Revisiting Transformers: The Movie 32 years after its release. 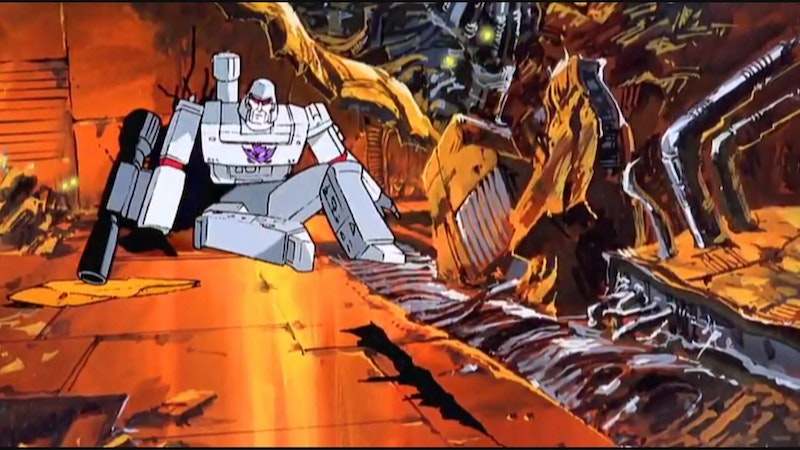 Hot Rod (Judd Nelson) is underwater, held in place by robotic tentacles, fiending off some species of robotic piranhas, and it’s hard to watch—not because you’re actually scared for Hot Rod, but because the animation is screwy, flickering, cheap anime. It’s almost as though you’re high. Every frame of Transformers: The Movie is like that, with the filmmakers exponentially multiplying the stakes, the surreality, the plausibility into something hyperactive and spasmodic. The period Saturday morning cartoon show seems puny and picayune in comparison. My father took me to see this movie when it opened and, beyond the death of Optimus Prime (Peter Cullen), I’d completely managed to forget pretty much every other element. Revisiting this with my son last month, I was struck by what a profoundly cynical commercial it is.

Set in 2005, Transformers: The Movie imagines a future in which the Decepticons have conquered Cybertron and the Autobots are essentially limited to a pair of moons and a city on Earth—a city that’s all but destroyed in the film’s protracted opening battle. A nine- or 10-year-old might overlook this in the florid washwes of fantasy violence, but a) this battle effectively lasts days, with humanity apparently opting to sit it out—there are two people in this thing, no more—and b) a ton of Autobots die. Ratchet, Wheeljack, Prowl, and Brawn get iced right off the bat. Bumblebee and Spike Witwicky’s kid are consumed by a Transformer planet. Megatron (Frank Welker) retires Optimus!

It’s exceedingly bleak, like having a key aspect of your childhood fed into a trash compactor. A few random Decepticons appear to die, but the only death that’s unambiguous is Starscream’s, which was a very long time coming. Optimus aside, none of the other characters really care; many, many new Transformers debut and are showcased almost bawdily. Listen closely enough and you can almost hear the ghosts of Hasbro executives laughing madly behind the stirring strains of Stan Bush’s faintly iconic single “The Touch.”

New models, new revenue streams. But also adversity, a significant challenge for our heroes to overcome, and the picture invests us in the crowning of a new Autobot leader. But the getting there is a bizarre hash of exhaustion and adorability where nothing matters. A powerpuff pink female Autobot named Arcee (Susan Blu)? Cool enough. Future fashion ripped off from a The Legion of Super Heroes comic book? Okay. Orson Welles, shortly prior to a fatal heart attack, voicing a living planet named Unicron? Sure. But so much of this is whiplashing and insipid.

Why freeze the Dinobots in their dinosaur forms, and lean so hard into their grammar-crimes idiocy? Why introduce a scrap metal trash planet full of vaguely racist Junkions stoned on bad television programming? Why expect us to believe that everyone consumed by Unicron early in the movie won’t be dead and digested by the end? Why wasn’t Kup voiced by DeForest Kelley—especially given that Leonard Nimoy was already part of the cast?

Transformers: The Movie is cheap kitsch, and to even begin to enjoy it, one probably has to revel in that. Embrace how Kup is basically a Star Trek: The Original Series cast member; giggle at how Grimlock (Gregg Berger) cares more about Kup’s long-winded war stories than about how many of their brothers are dying all around them. Embrace how baldly this movie rips off the Marvel Universe’s cosmic tribunal and barely tries to disguise that fact. Embrace how fucking spindly almost every Transformer who dies in this movie suddenly is, as though they’re made of cardboard instead of steel—they’re as weak and sickly as the Go-Bots, a period Transformers competitor franchise that no one remembers now, because the Go-Bots sucked almost as badly as this movie does.