Time has stopped, for now. 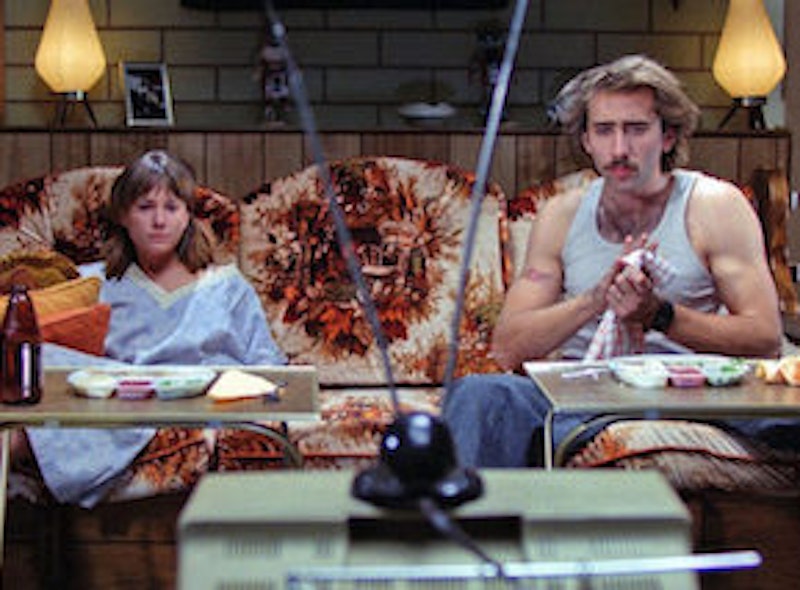 Once, you could only watch movies at one rate; you sat in the theater and 24 frames a second streamed by, unless the projector broke and it stopped all together. Now, when films are watched online or on delayed recordings, you can speed through boring parts at two, three or four times speed, or reverse over bits you missed. The speed of history varies.

Over the last year or so, I've written a series of articles on comedies from the 1930s, the 1980s, and the 1960s. Logically, 20 years should feel like 20 years gone, and 40 years creeping by should take 40 years. But looking at old films, the advancing hours don't seem to advance with the steady tread you'd expect. The year 1980 is 38 years ago; the year 1960 is 58 years past. So 1980 and 1960 are closer to each other than either is to 2018. Yet, 80s comedies like Raising Arizona (1987) feel like part of the contemporary world. The lone biker of the apocalypse blowing up rabbits is profane, goofy and funny in a way that would fit into current comedies like Santa Clarita Diet or The Good Place.

In contrast, the bumbling broad slapstick of The Nutty Professor (1963) seems to have fallen out of a cornier and largely irrelevant idiom. Even the music video hip innovations of A Hard Day's Night (1964) feel like museum pieces. Watching the Beatles cavort is pre-history. In contrast, Romancing the Stone (1984) isn’t pre-history, or archival. It's just a romantic comedy adventure that could’ve been filmed yesterday, if the fashions were updated and everyone had cell phones.

Part of the reason time feels out of joint is because I was only alive at certain joints. I remember the 80s, and saw films like Monty Python's Meaning of Life (1983) and television shows like Cheers when they came out, more or less. They feel like part of the contemporary world because I'm part of the contemporary world. Little Shop of Horrors, (1960) and The Producers (1967) were already old when I first heard about them, and so in my mind they remain old 50 years later. Time doesn't so much vary in speed as it remains stuck forever at whatever year it was when you were 15.

Not everything can be explained by my subjectivity, though. The 60s is about as distant from us now as it is from the first decade of the 1900s. But the 60s feels much closer to now than it does to even the screwball comedies of the 1930s. The Beatles still matter to contemporary music, whereas the pre-war dance band tunes which pop up in screwball comedies are quaint exercises in nostalgia. The Cold War, and therefore global politics, suffuses films like Dr. Strangelove (1964) and One, Two, Three (1961), while the newspaper in His Girl Friday (1940) is mired in local politics. Sometime between the 30s and the 60s, the United States became a global power. We're still living in the world where it is.

In The Rise and Fall of American Growth (2016), economist Robert J. Gordon argued that economic growth in the US was mostly driven by technological innovations.  Between the 30s and the 60s, the US developed a new highway system, antibiotics became widely available, and indoor plumbing extended into even rural areas. After 1970, though, Gordon says, inventions like cars, electricity, plumbing, air travel, were all well-established, and real economic growth plateaued. Outside of telecommunications advances, which don't necessarily cause economic expansion, the 2010s and the 1980s feel similar because they are similar. The 1930s feel very different from the 1960s, in contrast, because 30 years of substantial economic growth and change means that the 1930s and the 1960s were materially different.

It's a cliché to say that the world keeps changing faster and faster. The truth, though, is that during my lifetime, the world has changed more slowly than it did during my parents' or grandparents' time. When Michael J. Fox goes back to the 1950s from 1980, he enters a different world. When in the sequel he heads to 2015, he enters a different world too—but that's a sci-fi fantasy, flying cars and all. If Fox landed in actual 2015, he'd be surprised not at how much things had changed, but on how little had.

Gordon warns that technological changes on the scale of those that powered growth from 1870 to 1970 are unlikely. If we develop teleportation or cold fusion, perhaps we'll see a massive jump in standard of living for all. But short of that, we're probably stuck.

Or so it seems now; some 50 years into that one 1980s film that never seems to end. But it's also possible that this pause is just that, and everything will once again move faster. Twenty years down the road, maybe the comedies of the 2010s will seem like they could’ve been made yesterday. Or maybe they'll seem of a different world—one that's poorer, less advanced, or, more free.