Film Review: The Unexpected Po-Mo Tautology of Teen Titans Go! To the Movies

I don’t why I saw this movie but it sure was horrifying. D 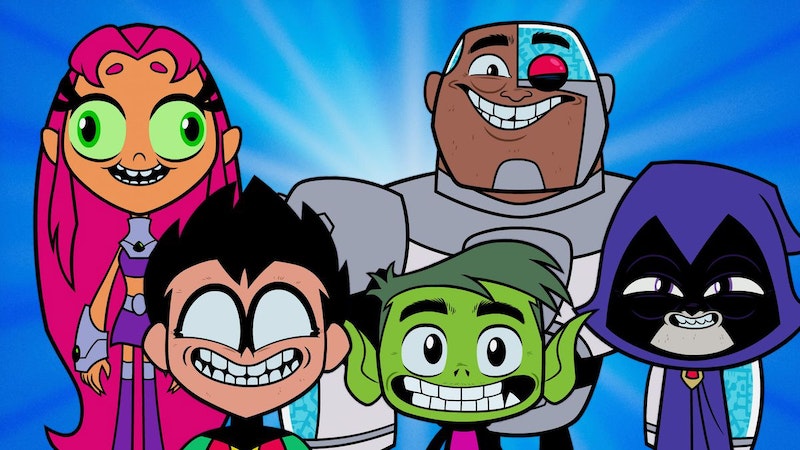 I’m not sure if I have food poisoning, the flu, or just severe nerves. I feel like doo-doo. But I cannot be stopped. Not today, Satan. I have things to take care of, and this is the first item on the list. Before I start, let me clarify that I’ve no idea how or why I ended up seeing this movie, but I did. Teen Titans Go! To the Movies. Out now everywhere via Warner Brothers. 88 minutes (don’t worry, no Neo-Nazi connection there… I think). I didn’t know this movie existed until the day I saw it, but I do remember watching the show Teen Titans when I was very young.

They’re superheroes but they’re kids, young teenagers I guess. There’s Robin, Raven, Starfire, Cyborg, and Beast Boy. Gotta admit I only know Robin. Never liked DC comics, too Republican. I still have a soft spot for Spider-Man but as I wrote a couple of days ago, superhero movies are clogging up multiplexes year-round now and hogging enormous amounts of money that could be going to… anything else. I’ll take anything other than another superhero or sci-fi/fantasy/action franchise sequel. Please, God.

But Teen Titans Go! To the Movies is somehow more interesting, revealing and honest about the glut of superhero movies always out now than any of the huge tentpole marquee movies like Wonder Woman or Ant-Man and the Wasp. Teen Titans Go! To the Movies is not an earnest, po-faced story of struggle, despair, and sorrow like the Batman movies: it’s a self-deprecating, tautological, endlessly self-referential movie that is constantly winking at the audience and operating way above the target demographic’s—children below the age of 10—heads.

Watching it, I was reminded of one aspect of The Emoji Movie: the punishingly vapid and insincere surface material ostensibly aimed at young children. But The Emoji Movie confronted and addressed our dependence on smartphones and had a very compelling original story and universe that could’ve come from a Philip K. Dick book. But the obvious model for this movie is Deadpool, an R-rated (and a hard R) action/comedy sleeper hit full of extreme violence, “adult language,” drug use, nudity, sex, and perhaps most importantly, a constant wink at the audience, breaking the fourth wall with abandon, bringing its jaded and knowing audience closer by letting them in on the joke, reveling in its stupidity and uselessness. Seeing the same tact applied to a movie aimed at children below the age of 10 was… bizarre, to say the least. It was only a notch less horrifying than those auto-generated YouTube videos of random cartoon characters swearing and killing each other (I recommend this article on the subject. Free panic attack!)

I’m not going to summarize the plot of this movie, since it doesn’t matter. It’s hardly there anyway: the Teen Titans are salty that they haven’t gotten their own movie, and would you look at that, their film debut is this watered down Charlie Kaufman Adaptation riff about how and why they can’t or don’t deserve to have a movie made about them. If you’ve seen Deadpool you know the frequency this is operating on.

Maybe I’m being optimistic, but I have to imagine that the majority of this self-referential humor is completely lost on the young kids in the audience. Then again, a lot of the jokes are about other superhero movies and their reputation and box office performance. I don’t want to think about a seven-year-old kid tracking the second week returns of Infinity War or knowing that Green Lantern was a bomb.

The most honest stretch of the movie comes about halfway through: an extended riff about one of the Teen Titans pooping in a prop toilet (yes, they’re on a movie set). They tell Robin how excited they are about pooping on set, not knowing it isn’t a functional toilet—Robin freaks out and the rest of the Teen Titans follow suit, coming up to him saying how satisfying it was to poop on set, and, you know, “Don’t go in there anytime soon.”

It’s five minutes at the most, but it’s the only part of Teen Titans Go! To the Movies that feels like it belongs in a kids’ movie. They didn’t shit, they didn’t crap, they didn’t jerk off or piss on the walls: no, they pooped, and they say they pooped, many times. In a maze of misplaced irony, somehow pooping was an oasis of sincerity.