Everyone's Gone to the Movies 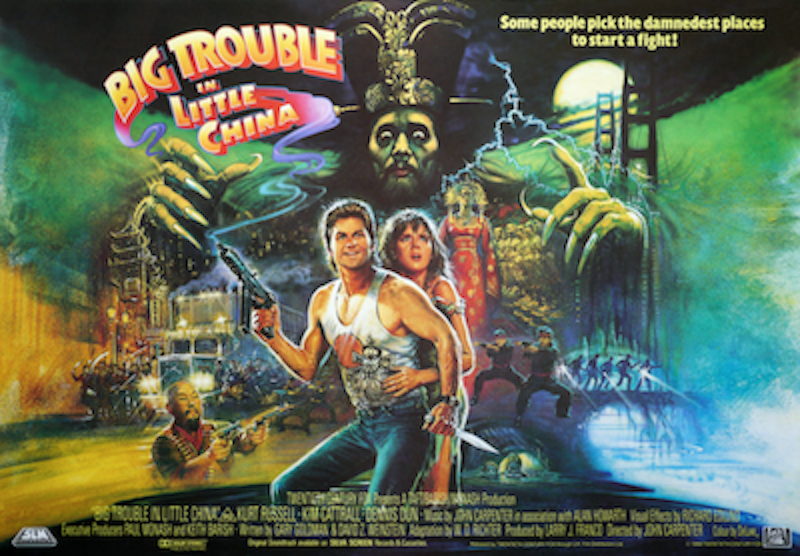 The first big martial arts set piece in Big Trouble in Little China (1986) doesn't involve any of the film's stars. Anglo trucker Jack Burton (Kurt Russell) and his Chinese-American friend Wang Chi (Dennis Dun), are trapped in an alley in Jack's truck when they witness a huge martial arts fight between good-guy yellow headbands and bad-guy red headband—a fight eventually disrupted by three flying magic fighters with preposterously wide-brimmed hats shooting blue lightning plus a seven foot tall intangible evil magician. Jack and Wang stare open-mouthed at the gun battle, the martial arts stunts, and the special effects, appreciating the spectacle along with the audience. You view the action along with the protagonists; it's a movie in which the real heroism is watching movies.

Big Trouble in Little China is a tribute to Hong Kong cinema, much like the previous year's The Last Dragon. Where The Last Dragon celebrated the cross-cultural possibilities of black kids cheering on Bruce Lee, Big Trouble director John Carpenter treats the contact between West and East less as celebratory melting pot, and more as post-modern train wreck. Jack doesn't learn how to be a martial arts master by watching martial arts masters; instead he's locked in his own Western movie tropes, as Kurt Russell channels John Wayne for basically the entire film. When he and Wang set out to rescue a damsel in distress and/or Jack's truck, Russell turns to those they've leaving behind and declares, "Okay. You people sit tight, hold the fort and keep the home fires burning. And if we're not back by dawn"—and here he gives a knowing, cocky wink—"... call the president."

The joy of the film is both the mash-up of cowboy and martial arts tropes, and the way in which the movie nonchalantly shuffles back and forth between treating the heroes as heroes and treating them as cinemagoers ineptly pretending to be heroes. Wang and Jack wander through the plot to rescue Wang's fiancé Miao Yin (Suzee Pai) from the nefarious demon ghost David Lo Pan (James Hong). Facing an array of martial arts experts and evil monsters, Wang and Jack's fighting competence varies wildly from moment to moment. Sometimes they're cinema stars; sometimes they're just average Joes who are cinema stars only in their dreams.

Early on, Wang bets Jack that he can cut a bottle in half with his knife; he fails ludicrously, and starts babbling about how his spirit and mind were not in alignment, while Jack looks on skeptically as if to say, "You've been watching too many martial arts movies, doofus." But later (maybe because of a magic drink, but not necessarily) Wang displays miraculous martial arts abilities, leaping into the air to fight on the wing, doing multiple astonishing back-flips, dodging bullets and wreaking carnage, pausing only to raise his eyebrows to declare, "Yes, of course, I do this all the time."

Jack's combat prowess vacillates even more. Mostly he's comic relief; a helpless white guy trivially dispatched by even low-level martial arts functionaries. In his first fight scene he asks in bewilderment what nunchucks are before his legs are swept out from under him and he lands on his butt. He can't even be a leading man right; after he kisses Gracie Law (Kim Cattrall), he runs around for 10 minutes with her lipstick on his face before she wipes it off him. Before he throws himself into a melee, he shoots his gun in the air, dislodging a giant chunk of masonry, which lands on his head and knocks him out for most of the battle.

And then, in the climactic battle scene, he throws his trusty knife at David Lo Pan… and misses by a mile, hitting a giant Chinese gong. Lo Pan picks up the knife, and smugly hurls it back at Jack—who unexpectedly snatches it out of the air, throws it again, and kills the evil Chinese demon spirit dead, much to everyone's surprise (especially Lo Pan's.) "It's all in the reflexes," Jack explains with broad John Wayne nonchalance.

One of the film's most memorable special effects is a giant bloated floating head critter with eyes on stalks around its face and even an eye on the end of its long, disgusting sinuous tongue. The monster’s supposed to be a spy for Lo Pan, but it's also a (multi-eyed) winking metaphor for the viewer, and the film's characters. Jack constantly refers to himself in the third person, but everyone else in the cast also performs like they know they're in a performance. Cattrall plays Gracie Law like a pastiche of spunky heroines past, chin always up and exposition always breathless, while Dennis Dun's Wang Chi is a pastiche of earnest sidekick. "I've got a very positive attitude about this," he says jovially before a big fight; earlier he proposes a toast: "Here's to the Army and Navy and the battles they have won; here's to America's colors, the colors that never run." To which Jack responds, "May the wings of liberty never lose a feather."

American heroism in Big Trouble in Little China is mostly a pratfall and a joke, as for that matter is Chinese heroism. The film presents a cultural clash in which both cultures are mostly a put-on; the John Wayne accent is no more real, and no more convincing, than the borrowed Bruce Lee poses. Like the one hapless villain in the dénouement, all your heroic myths will swell and bloat up, shouting incoherently before exploding in a glorious shower of green gunk. "The best of two worlds!" Lo Pen declares with lascivious delight as he contemplates marrying both green-eyed heroines, one Chinese and one American. For Big Trouble in Little China, those worlds are best in part because they aren't worlds at all, but movies.