Film Review: The Death of Stalin Dies in the Theater 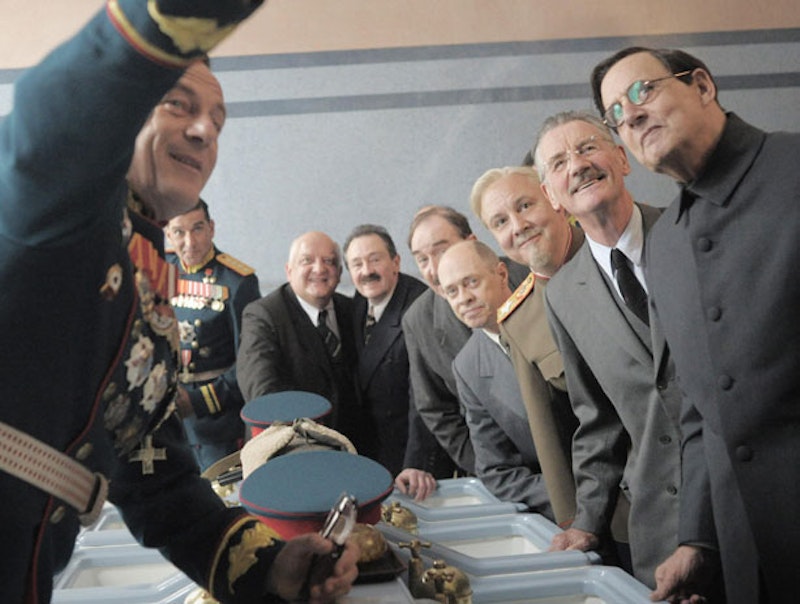 Communist slapstick at the expense of Josef Stalin and the Soviet Union? Perfect timing. Though The Death of Stalin was produced before the 2016 presidential election, director Armando Iannucci (In the Loop, Veep, The Thick of It) lucked out with this one: Millennials, Gen X’ers, and even some Gen Zeds are full fledged rose emoji Democratic Socialists of America members, running purity tests on every possible candidate and often busy eating themselves alive from the inside out. Bernie Sanders—what a guy, right? And then there’s the MSNBC Maddow cohort suffering from total Russia Derangement Syndrome, limousine liberals who think everything that doesn’t conform and contort to their worldview is somehow a product of Russian “interference.”

Apparently, no one’s safe from the world-bestriding colossus Vladimir Putin, and while there’s plenty to be worried about (that Donald Trump is being blackmailed by Putin and doesn’t dare utter a negative word about the murderous dictator), the rise of enthusiasm for socialism and even communism in America is not some psy-op conspiracy theory driven by the Kremlin. People just want free healthcare and the right to choose.

A Mel Brooksian screwball comedy about Josef Stalin’s death and the incompetent and petrified yes men around him is a great idea, and the funniest thing about The Death of Stalin is that all the characters are played by British and American actors who make no attempts at a Russian accent. They sound a lot like the characters on Veep, and the conflict throughout the movie is more or less the same: bumbling bureaucracy, scared opportunists and hapless employees. Soviet groupthink is the running joke throughout The Death of Stalin, but it really loses momentum about a half an hour in. I was excited to see the movie, not only because of the concept but also because of the near unanimous rave reviews, like this one by my colleague Stephen Silver.

Silver writes, “The Death of Stalin attempts to wring comedy out of such subjects as a totalitarian state and the fear, intimidation and wanton violence that come along with it. It shouldn’t work, but it does.” This isn’t exactly new ground, far from it—I could go on and on naming other black comedies that go miles further into the stratosphere than this anodyne wisp of a movie. Silver continues: “The Death of Stalin is very dark, and considerably more violent than Iannucci’s previous work. But it plays like a thought experiment in Mel Brooks’ old theories about how just about anything can be funny, if done right. And the Death of Stalin is—filled with great set pieces, crackling dialogue and scenes that build up tension and collapse into humor.”

The problem with this movie is that it really isn’t funny, and for the first time in a while, I saw almost all of the best jokes in the red band trailer that played at the art house over the past month. It’s also worth noting that it completely died in the packed theater I saw, so many jokes and laugh lines met with total silence. It’s oddly procedural and one-note—we get it, these people are incompetent and ill-equipped to deal with anything by committee because of the conditioning they’ve gone through. One joke does not sustain a 107-minute movie. It was an inspired idea to have these Russian historical figures played with American and British accents, but the inspiration ends there, and despite the critical praise, I think most audiences are going to leave bored and disappointed, despite the great cast and central idea. I’d rather stand in a bread line.