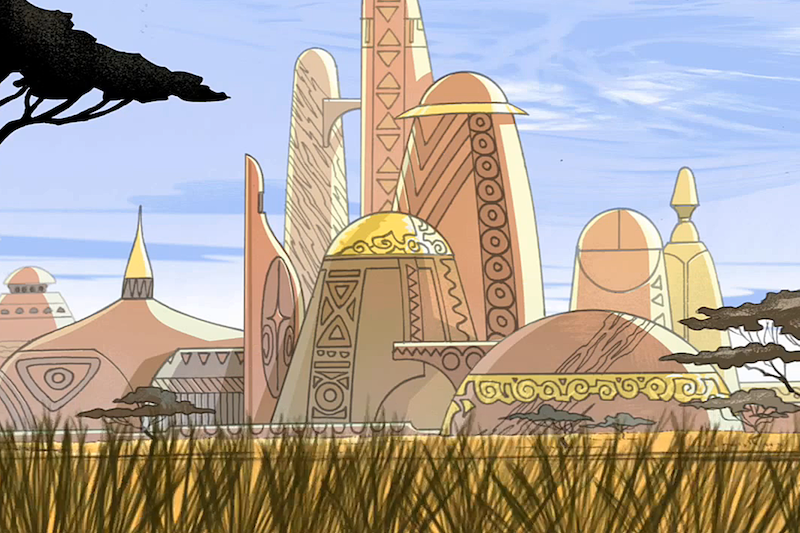 Black Panther is the first Marvel Cinematic Universe film that’s explicitly anti-racist, not to mention feminist. Its casting neatly reverses that usual Hollywood default; instead of an all-white cast with a token black actor or two, its cast is entirely black, with a couple of sidekick bit parts for white men. More, where most Marvel films are obliviously post-racial, addressing discrimination by metaphor if at all, the plot of Black Panther specifically concerns global inequality, and the oppression of people of color.

Still, despite these differences, Black Panther is broadly in line with the MCU's core ideological commitment of humanitarian liberal interventionism. Or, to put it another way, the MCU, and Black Panther as well, constitute one long apology for U.S. imperialism.

It may seem odd to argue that Black Panther co-signs American foreign policy since the film offers, after all, a consistent and pointed critique of colonialism. The film is about Wakanda, a high-tech Afro-futurist paradise, which has used its advanced machinery and access to the miracle metal vibranium to build a utopia and hide itself from the rest of the world. Wakanda's isolationism is threatened by Erik Stevens, or Killmonger (Michael B. Jordan). Killmonger is an American child of the Wakandan royal family; embittered by his exile, and the racial injustice he’s witnessed, he wants to become king and use Wakandan tech to overthrow the world.

As Adam Serwer writes at the Atlantic,  Killmonger is a multi-level rebuke to US global hegemony. Erik verbally and forcefully rejects US racism. He grew up in Oakland, and has seen discrimination and prejudice first-hand.

But Killmonger also shows the evils of imperialism because he plans to reproduce them. Killmonger served in U.S. Special Forces, and was involved in overthrowing democratic regimes. He’s part of the system he wants to destroy, and as such, he’s doomed to reproduce it. "The sun will never set on the Wakandan empire," Killmonger declares, mimicking a British catchphrase.

Erik wants to send Wakandan weapons to black rebels across the world, fueling insurgencies, destabilizing democracies, and ultimately establishing Wakandan rule. This "plan for 'black liberation'… is an American policy that has backfired and led to unforeseen disasters perhaps every single time it has been deployed," Serwer writes. And he adds, "It is somewhat bizarre to see people endorse a comic-book version of George W. Bush's foreign policy and sign up for the Project for the New Wakandan Century as long as the words “black liberation” are used instead of “democracy promotion.”

In Serwer's eyes, Black Panther endorses a different path. Rather than waging war on the outside world, the Wakandan kind, T'Challa (Chadwick Boseman) decides, following the defeat of Killmonger, to take the advice of his ex, Nakia (Lupita Nyong'o), and share Wakandan tech and wisdom with the rest of humanity.

This new policy begins, ironically, when T'Challa decides to bring CIA Agent Everett Ross (Martin Freeman) back to Wakanda for healing after he’s taken a bullet for Nakia. The C.I.A. is responsible for innumerable coups, violence, and torture across the world. T'Challa's decision to trust and ally with an American intelligence officer is a symbolic rejection of revenge and fear, and an embrace of a new policy of grace and charity. "In times of trouble, the wise build bridges and the foolish build walls," T'Challa tells the United Nations in a post-credits clip—a pointed, and certainly intentional, rebuke to America's real-life wall-builder in chief.

It's hard to argue with reconciliation and bridge-building. Nevertheless, Martin Freeman's portrayal of Ross as a courageous and benevolent CIA agent raises some questions. Again, the CIA's role in Africa hasn’t been notably constructive. And yet, we're supposed to identify with Ross, who shoots down ships piloted by Wakandans—and shoots them down from the safety of a remote-controlled video game console. Black Panther claims to be anti-colonialist, but it encourages the viewer to cheer as American-piloted drones kill people of color, all for the greater good.

Ross' role in the film indicates an uncomfortable truth about the Wakandan's new way—it's not new. US imperialism is carried on in part through war and black ops, but it takes other forms as well. US foreign aid and trade are figured as charity and humanitarian largesse. But in practice, thanks to disproportions of power and wealth enforced by global institutions like the UN, World Bank, and WTO, soft power is often as coercive, or even more effectively coercive, than outright invasion.

The United States uses trade agreements to force other nations to accept the US patent medicine system, jacking up the price of life-saving drugs and resulting in widespread death and suffering. It uses loans, grants and aid to force economic restructuring, which often guts safety nets and welfare programs. Health programs are used to impose US anti-abortion strictures; anti-trafficking programs target sex workers. And technological aid often, in practice, means, "guns."

Wakanda, admittedly, is not America. It’s ruled by a wise and kind king whose only motivation is altruism. Nakia, who pushes the king to break Wakanda's isolation, is compassionate, self-sacrificing, brave, and good. These are people you can trust.

But America also argues that it is good and trustworthy. This is the ideological basis and fantasy of superhero films in general, and the MCU films in particular. Iron Man is about an arms dealer with a heart of gold; Tony Stark (Robert Downey, Jr.) uses his advanced weaponry to fly to Afghanistan and shoot only thuggish bad guys, saving every innocent.

In Captain America: Civil War, the Avengers do kill civilians—but only by accident, while trying to prevent greater loss of life, and they all feel bad about it. For that matter, the United States insists that its goal in Afghanistan is to liberate women, promoting a kind of imperial feminism that echoes Nakia's. In the MCU, mistakes are sometimes made. But ultimately superpowers are good, and imperialism is good, because they’re all wielded by good people. We can trust Captain America, or King T'Challa, to do the right thing.

It's exciting and inspiring to see on screen a depiction of black self-determination, genius, and power. US imperialism is in part built on ideas of white supremacy—ideas that Black Panther's claws brutally shred. But those claws leave other imperialist preconceptions unscathed—like heroes and nations run by paragons will do what’s best for everyone.

Imperialism with a conscience isn't really imperialism at all. That's the ideology of Wakanda, the MCU, and America. But despite promises to the contrary, bridges built by kings rarely lead to empowerment.