Film Review: The Death of Stalin is the Funniest Movie of the Year

Another brilliant Steve Buscemi performance. A- 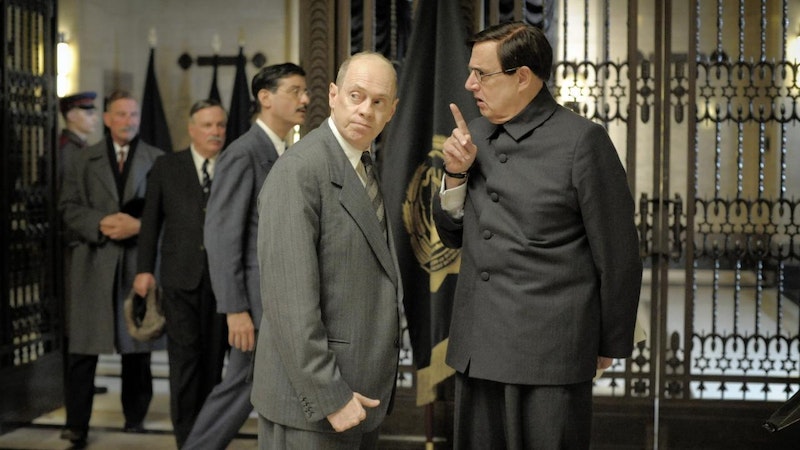 In an age in which most political satire sucks, Armando Iannucci has shown that there’s a better way than Andy Borowitz columns and covfefe jokes. The Scottish writer/director’s BBC Four series The Thick of It skewered British politics in a way that was savage and biting, leading into 2009’s wondrous spinoff movie In the Loop, which is not only one of the funniest movies of the current millennium, but also delivered probably the best and most accurate explanation that any work of fiction has ever given of how the Iraq War happened.

Iannucci’s formula transferred seamlessly to Washington with the HBO series Veep, which he created and ran for its first four seasons. Beyond indelible characters and consistently hilarious dialogue, all of these works are based on a simple notion: That the dysfunction of our political culture, and the disaster that often comes with it, is a combination of the malevolence of the few, and the cravenness, laziness and cowardice of the many.

The director’s latest film, The Death of Stalin, takes a big risk: It moves the action out of the West, out of the present day, out of democratic politics and into the realm of real people and real history—while also making things considerably darker. And it’s a gamble that pays off handsomely—this is far and away the funniest film of the year so far.

Directed by Iannucci, who wrote it along with three others and based it on a French graphic novel, The Death of Stalin attempts to wring comedy out of such subjects as a totalitarian state and the fear, intimidation and wanton violence that come along with it. It shouldn’t work, but it does.

The Death of Stalin is very dark, and considerably more violent than Iannucci’s previous work. But it plays like a thought experiment in Mel Brooks’ old theories about how just about anything can be funny, if done right. And the Death of Stalin is—filled with great set pieces, crackling dialogue and scenes that build up tension and collapse into humor.

The film’s set before, during and after Stalin’s death in 1953. We’re first introduced to the dictator’s entourage, including Khrushchev (Steve Buscemi), Malenkov (Jeffrey Tambor), Molotov (Michael Palin) and Beria (Simon Russell Beale.) Once Stalin (Adrian McLoughlin) keels over, there’s some humorously absurd jockeying for position among the remaining top Soviets. The film sticks surprisingly close to history, even if the dialogue isn’t quite what was said.

Speaking of which… you may have noticed something about that cast, and how decidedly not-Russian it is. The film is entirely in English, and none of the actors make even a cursory attempt at a Russian accent; most of them sound English, Scottish or American, with Buscemi playing Khrushchev as if he hailed from Brooklyn (Brighton Beach, maybe?) This bothered me for about two minutes.

Buscemi’s a treasure, and he’s been on a roll lately. He had a wonderful turn a year ago in Norman, as a New York City rabbi, and it says a lot about an actor that he can convincingly play both Nikita Khrushchev and a rabbi within a year of each other. He plays the future Soviet leader as a scheming operator, a sort of Russian turn on his Nucky Thompson politician/gangster from Boardwalk Empire.

Jeffrey Tambor plays Georgy Malenkov as a nervous basket case, a sort of Soviet Hank Kingsley, although for #meToo reasons this may be his final movie role. It’s been called “Stalinistic” that Tambor was taken off the poster post-scandal, but if anything’s that’s just savvy marketing; the actual banning of the film, in Russia, is much more censorious if you ask me. Meanwhile, Simon Russell Beale plays Berea as a coldblooded antagonist, one whose glasses somehow balance on his nose without side supports, even when he’s looking down.

Like all Iannucci projects, the cast of The Death of Stalin goes deep. Veep has the great character of Danny Chung (Randall Park) a war hero-turned-politician who’s unbelievably smug about it; Stalin gives us Jason Isaacs as Red Army chief of staff Georgy Zhukov, who brings a swagger reminiscent of Gaston. Another highlight is former Homeland actor Rupert Friend as Vasily Iosifovich Stalin, Stalin’s son and a drunken buffoon who’s introduced trying to hide from his father that the national hockey team has died in a plane crash. Vasily was, in many ways, the Donald Trump, Jr. of his day.

The question raised by The Death of Stalin is, can Armando Iannucci’s style of the humor of government apply to the totalitarian past? The film itself answers clearly: it can.