Charly (1968) features one of the few quality performances of an intellectually disabled character by an able-minded actor. 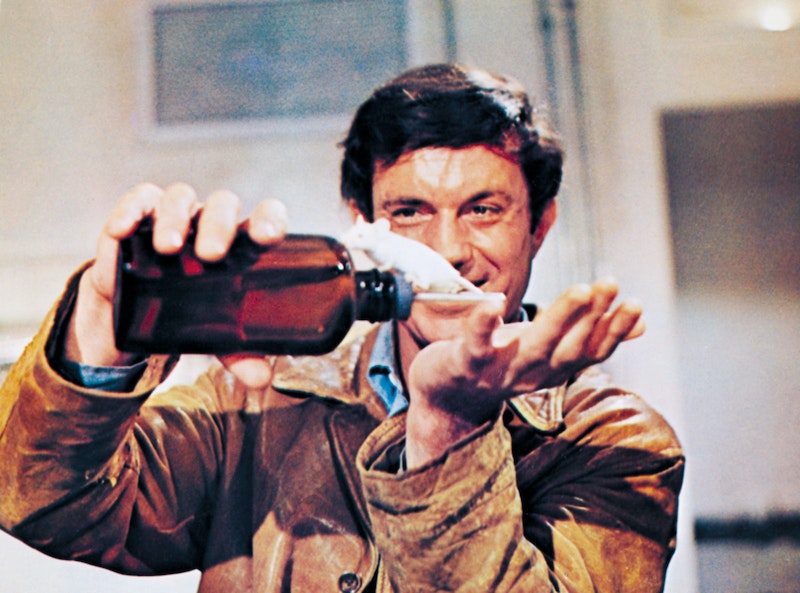 Casting an able-minded actor to play a mentally disabled character is a gamble. Not only does it raise questions of representation of disabled people, but if not handled carefully, the result can be Sia’s disastrous film Music in which Maddie Ziegler portrays the autistic titular character as a horrible stereotype. Occasionally Hollywood gets it right, and one of the best examples is the 1968 film Charly, directed by Ralph Nelson and starring Cliff Robertson. Based on Flowers for Algernon by Daniel Keyes—first published as a short story in 1958 and then a novel in 1966—the film tells the story of Charlie Gordon, a 38-year-old intellectually disabled man whose intelligence increases after an experimental operation, only to lose it all in the end.

Charly (played by Robertson) is first seeing at a playground sliding down slides, swinging on swing sets, climbing on monkey bars, and laughing with children, all while wearing a brown suit. He’s a grown man on the outside, but a little boy inside. Cut to him watching college students on campus engaging in intellectual debates, wishing he could be one of them. Charly takes ESL night classes to learn how to read and write better, but struggles. He works as a janitor at a bakery where his co-workers play cruel tricks on him for their amusement, although Charly doesn’t know they’re laughing at him.

Charly takes part in several aptitude tests conducted by his night school teacher, Alice Kinnian, at the clinic of Drs. Nemur and Strauss. One test has him racing a lab mouse named Algernon, who runs through a maze while Charly does the same maze on paper to see who finishes first. Charly loses and is embarrassed by his defeat until Alice tells him that Algernon had an experimental operation to increase his intelligence. Charly agrees to have the same operation. He shows no progress at first after the operation until one night when he finally beats Algernon in a race.

Charly’s intelligence grows at an alarming rate to the point where, during private tutoring sessions with Alice, he answers her questions mid-sentence. He develops feelings for her. At work, his co-workers try to set him up by having him work the dough-mixing machine, which one co-worker says took two years for him to learn. Charly successfully operates the machine in one try, which leads to his termination because he can no longer be the butt of everyone’s jokes.

Dr. Strauss tells Dr. Nemur that despite his increased intelligence, Charly still has the emotional maturity of a child. Dr. Nemur doesn’t believe her. One night Charly shows up at Alice’s apartment and confesses his love for her. She explains that he’s confused, but he forces himself upon her and kisses her until she slaps and rejects him. Charly deals with the rejection by becoming a hippie biker. When he returns home, Alice is waiting for him, and the two go camping in the woods for a four-week romantic romp.

Drs. Nemur and Strauss make a presentation about Charly’s operation at a science convention. When Charly comes on stage for an audience Q&A, he’s curt, talks about how technology will lead to future devastation, and reveals he’ll regress back to being intellectually disabled. He then turns to the doctors and pulls Algernon’s dead body from his coat pocket, exposing the secret they’ve been trying to hide. Charly runs from the convention and into the streets but has visions of his old self everywhere. He returns to the clinic and, with Drs. Nemur and Strauss, tries to find a way to stop the regression. In the end, nothing can be done, so Charly accepts his fate. The film ends with Alice watching him play with the other children at the playground again.

The strength of Robertson’s performance is how he humanizes the character. He plays pre-op Charly with a childlike sweetness and innocence. When Charly tells Alice that he’d “like to get smart” so he can better understand his co-workers, one can sense the isolation he feels from others because of his disability. It’s a cliche that actors who play disabled characters automatically get Oscars, but Robertson did earn his Best Actor award for this role.

The film isn’t without flaws. Nelson tries too hard to appeal to the hippie generation by using various experimental film techniques, most notably split screen during certain dialogues. There’s also the bizarre scene where Charly becomes a hippie biker, which uses a collage of images to illustrate his fractured state of mind. The scene might’ve worked in a different film, but in Charly it comes off as a silly artsy attempt. It doesn’t help that Robertson looks ridiculous with a shaggy haircut and beard.

The love story between Charly and Alice feels forced. While the characters fall in love in the novel, the film never explains why she suddenly wants him after he nearly raped her. If the film showed Alice sorting out her feelings for Charly, it would’ve made the relationship more authentic.

The rest of the film makes up for its flaws. The Ravi Shankar score is gorgeous, and the cinematography captures the beauty of autumn in Boston. Sometimes Nelson’s experimentations pay off; the scene where Charly runs down the halls of the clinic in slow motion and sees his old self around every corner is particularly powerful. What ultimately makes Charly a wonderful film is the story of an outcast who gets what he wants, but at a terrible cost.