Vincente Minnelli's hyperreality and the naturalism of impatient Frank Sinatra in Some Came Running (1958). 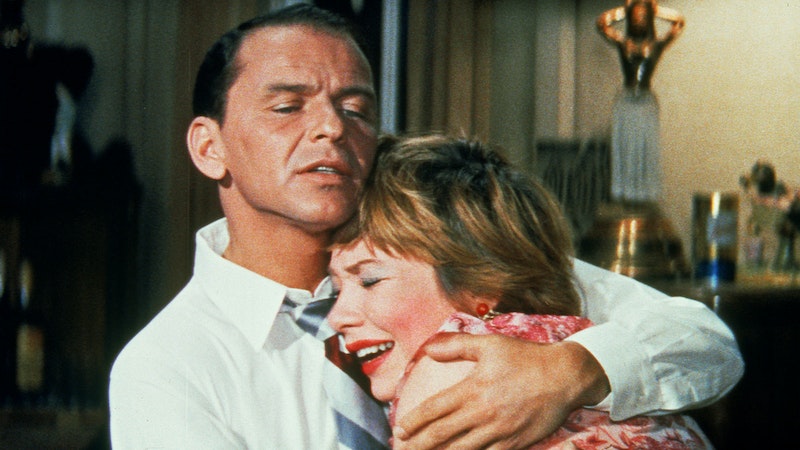 Long after Douglas Sirk was welcomed into the pantheon of great 20th-century directors, Vincente Minnelli is still taken for granted. Not overlooked, and not underrated per se, but his reputation as the king of movie musicals and the director of Meet Me in St. Louis over everything else has left so many of his films in the shade. Unlike Sirk, Minnelli never had any major critic or filmmaker beat the drum—if Rainer Werner Fassbinder hadn’t made such a big deal about Sirk in the early- and mid-1970s, movies like All That Heaven Allows and Written on the Wind wouldn’t have such a firm place in the canon now. Again, Minnelli is well-known and well-regarded, but he was much more prolific and diverse than most people realize.

In 1958 alone, at the height of his commercial popularity and artistic abilities, Minnelli released three films: Gigi, The Reluctant Debutante, and Some Came Running. The first one scored a number of Oscars, including Best Picture and Best Director for Minnelli, the second is a fine teen melodrama featuring young John Saxon and Angela Lansbury, while the last is a 135-minute tragic melodrama starring Frank Sinatra, Dean Martin, and Shirley MacLaine, along with Arthur Kennedy and Martha Hyer. Some Came Running is closer to Rebel Without a Cause or Michael Curtiz’s Flamingo Road than any of Minnelli’s other films. He never worked in noir or crime, and only Two Weeks in Another Town is darker and more cynical than this.

Sinatra stars as Dave Hirsh, a WWII vet back in his small hometown in 1948. In Parkman, he’s known as a wash-out: with two novels in the library, he considers himself finished, while “schoolmarm” Gwen French (Martha Hyer) desperately tries to get him to start writing again and to clean up the one manuscript he has sitting around. James Jones’ novel is an outrageous 1266 pages, and Some Came Running the movie is a perfectly comprehensible and successful adaptation at just over two hours—a feat of compression, or a knock on Jones’ longwinded prose, apparently better suited for beloved adaptations (From Here to Eternity and The Thin Red Line) than as novels themselves. Naturally, Dave’s shady post-war past in Chicago has to catch up with him in this horribly provincial town, and until then, we’ll watch everyone have affairs, keep secrets, discover hidden horrors, and judge each other in their drawing rooms in silence.

Minnelli’s production design—lighting, costumes, makeup, props, sets—is as hyperreal and hallucinatory as ever, but even more than in his other films, he lets the camera run in Some Came Running, allowing scenes to play out over minutes in single takes (no doubt due to Sinatra’s infamous impatience with multiple takes). Unlike contemporary TV and many movies, actors have time to act within a single frame, in a single piece of time. Minnelli shoots most of his characters in wide and medium shots, and even with the most incredible look, you need great actors to pull off such a traditional and conservative camera approach. Watching Sinatra and MacLaine is glorious because every gesture, every line reading, every angle and pose they take is perfect. With their bodies, more lithe and able than most actors’ today, they’re as responsible for these indelible images as Minnelli.

When Ginny falls dead into a wounded Dave’s arms, the whole town, including Dave’s brother and his family, rush to look, and they’re all visibly repulsed by the sight of a veteran-turned-successful-author in the arms of a prostitute, or as Bama calls her, “a pig.” Some Came Running is as frank and explosive in its examination of provincial hypocrisy and perversion as Rebel Without a Cause, and it’s a clear precedent for Twin Peaks. Even for 1958, a line like “Look, I gotta nothing against Ginny, but she’s a pig” is shocking, even if it’s directed at a “whore.” Similarly, at the end of a scene where Frank’s affair with his secretary Edith (Nancy Gates) has been discovered, he tells her that, “When I married my wife, you were only four years old.” Cross dissolve into the next scene. It’s a charged line to highlight.

Minnelli shoots most of Some Came Running at a distance and at length, no doubt due to Sinatra’s impatience. The glories of CinemaScope also meant fewer close-ups, but when they come, they have all the more impact: MacLaine has rarely looked as beautiful or angelic. Even so, most of this movie is shot head-on by necessity: what results is a beguiling combination of naturalism in the performances and total fantasy in their surroundings. Minnelli didn’t drive actors crazy with dozens of takes like William Wyler, but it’s obvious that on Some Came Running he was forced to modify his style to suit his star. It’s not an entirely successful combination, but always fascinating and totally its own.

More than anything, seeing Minnelli’s films on Blu-ray has been revelatory. Take any of his color films from the mid-1940s to the early-1960s and realize that Wes Anderson was not the first person to direct furniture before people. This isn’t decadence or meaningless indulgence, it makes the movie, and in many ways, is the movie: pure aesthetic pleasure, candelabras and fainting couches in a small story about post-war anomie in the American Midwest. If Minnelli had any goals other than pure aestheticism, he wouldn’t be dismissed as the “king of movie musicals,” and would be properly considered the precedent for David Lynch. Some Came Running is the Blue Velvet of the 1950s.