Film Review: The Glass Castle Fails on Almost Every Level

Jeannette Walls’ life story isn’t given its due. C 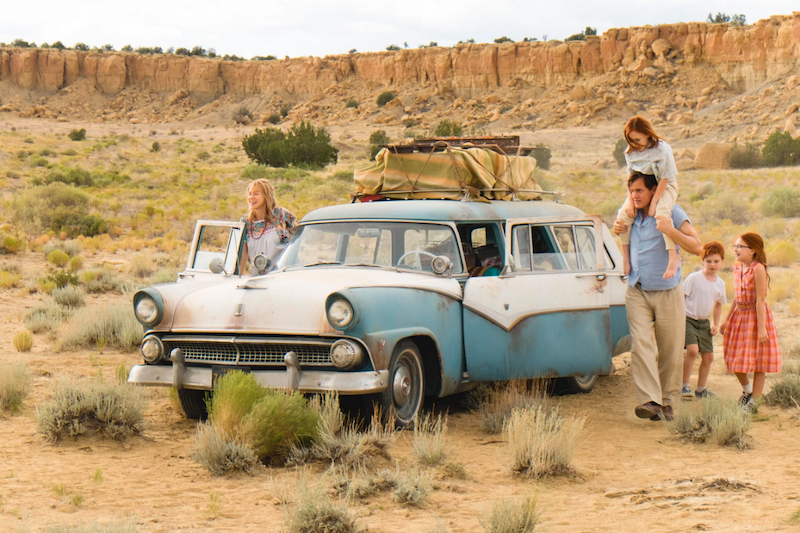 In The Glass Castle, the charismatic, larger-than-life father of a huge family drags his brood across the country, defending his unconventional worldview and nontraditional parenting methods against a skeptical world. This was also the premise of another movie, Captain Fantastic, which came out a year ago, featuring Viggo Mortensen as a very similar father, raging all film long about the failures and corruption of the square world. The Glass Castle, despite some good performances, mostly fails for the same reason Captain Fantastic did: It gives its father character a redemption, and a canonization, that he doesn’t deserve.

The Glass Castle is based on the bestselling memoir by Jeannette Walls, who was a magazine gossip columnist in 1980s-90s New York City, and a sometime MSNBC fixture. Brie Larson plays Walls, and the book tells the story of her very nontraditional upbringing, in which Walls and her three siblings were herded around the rural West and South by their parents (Woody Harrelson and Naomi Watts), as their ne’er-do-well dad fled creditors, pursued one failed scheme after another, and drank a hell of a lot.

Walls’ father’s worldview isn’t that far off from Mortensen’s in Captain Fantastic: a combination of vague political leftism, paranoia, and off-the-grid survivalism, although The Glass Castle version combines this with crippling alcoholism and a failure to ever follow through on any of his big plans. His oft-mentioned, never-realized plot to build a glass-enclosed dream home gives the memoir, and film, its title.

The Glass Castle toggles back and forth between Walls’ childhood and her adulthood, as a rising gossip columnist wearing Working Girl-style fashions and preparing to marry a finance guy (New Girl’s Max Greenfield, playing the part not nearly as Scaramucci-like as he probably should have). The flashbacks, over and over, show Harrelson as a caring but largely out-of-control dad, seemingly not allowing his children to go to school or see doctors, and exposing his family to all sorts of horrors, up to and including leaving them in the care of a relative who, it’s implied, is a known sexual abuser. Watts plays the mom as more of a space cadet, a much more natural use of the actress’ talents than the Twin Peaks revival has shown us so far.

But then the film, in its third act, pivots and makes a hero out of this drunken man, through a couple of strategically inserted flashbacks. It also concludes with a rather ridiculous either/or: Be a soulless 1980s Manhattan yuppie, or buy in to the Rex Walls Way. There are no other options for how to live one’s life. This pivot all but ruins the film because it’s so unearned.

The Glass Castle was directed by Daniel Desson Cretton, whose previous film, Short Term 12, was one of the best films of 2013 and among the best indie movies this decade. It also starred Larson, as a counselor at a group home, and cemented her as an actress of the top tier; that performance was much more deserving of awards attention than her part in Room, which won Larson a Best Actress Oscar two years ago.

Cretton’s new film, unfortunately, is a big step down, and the filmmaking isn’t all that impressive either. One scene, in which Harrelson repeatedly throws a young Jeannette into a pool, is painfully on the nose even before Harrelson explains afterward that it’s a metaphor for life itself. Another big weakness? The film barely touches on Walls’ work as a gossip columnist, or how her unconventional upbringing led her to such work.

Harrelson has been on something of a roll lately. His Kilgore/Kurtz routine in this summer’s War For the Planet of the Apes was the best thing about that film, and he gave a stirring, quietly against-type performance in last year’s outstanding The Edge of Seventeen. Here, though? His performance as Rex is a lot of scenery-chewing and overacting. Larson is better, but she’s starting to get typecast as a young woman coming to turns with victimization—which was a revelation in Short Term 12, but at this point she’s repeating herself. Fans of the book, and Walls’ other writing, may appreciate the film version of The Glass Castle. But otherwise, there’s not much reason to see it.

Whose Streets? Is an Illuminating Look at Ferguson Protests. B

Whose Streets? is part of a burgeoning genre of on-the-ground documentaries about the Ferguson protests and other recent major demonstrations against police brutality. Craig Atkinson’s Do Not Resist, last fall, got there first, with a more overarching look at how law enforcement culture led to those events.

Directed by Sabaah Folayan, Whose Streets?, a Sundance selection from January, focuses more specifically on a handful of protestors who were on the ground in Ferguson. It follows a few protesters over the course of about a two-year period, through some raw and often uncomfortable stuff. It’s infuriating, but very well done. The challenge with any film like this is that a lot of similar footage was shown on the news, for hours, every night for weeks and even months, back in 2014. Folayan’s film meets this challenge by going in-depth with several people, the most compelling of which is Britanny Farrell, a nursing student who at one point faced jail over her role in the protests. We also see one of those block-the-highway protests, from the standpoint, for a change, of the ones doing the blocking.

There are some egregious sins of omission—the film mentions the Department of Justice report about systematic bias in the Ferguson Police Department, but leaves out the other DOJ report, from the same day, that sided with Darren Wilson’s version of events. But overall, Whose Streets? is a compelling, nerve-wracking, and illuminating look at a fraught subject.