On Nikolaj Arcel’s The Dark Tower; read the books instead. 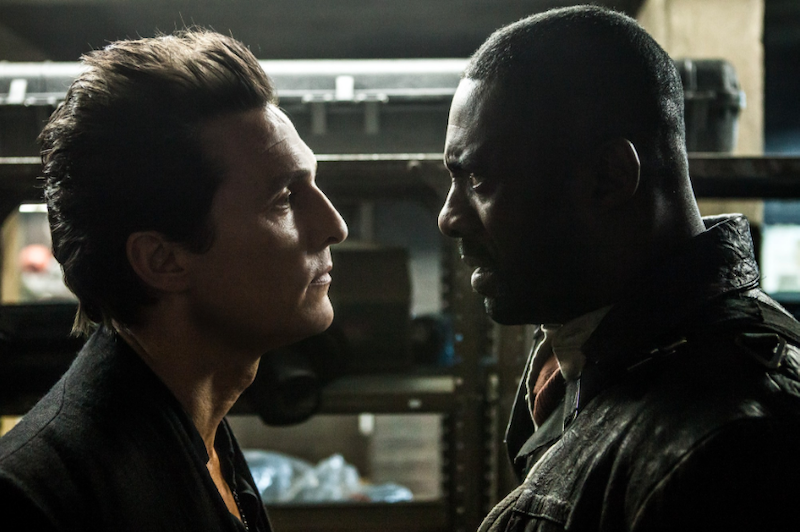 Like a Velvet Glove Cast in Iron, cartoonist Daniel Clowes’ macabre epic, is almost beyond description. Serialized from 1989 through 1993 as part of the author’s Eightball comic, then collected in graphic novel form, Velvet Glove makes its nests in government conspiracy, sexual deviancy, and graphic violence, a surreal mix of David Lynch, David Cronenberg, and John Waters, with a hint of Thomas Pynchon’s The Crying of Lot 49. It’s a story resolutely unadaptable to the cinematic medium, and Clowes, ever the self-satirist, would sneak a few pages detailing a film version into Eightball #11—neutering the narrative by boiling it down to a conventionally bland Hollywood version, replete with a friendly alien, a flashy sports car, and Blues Image’s “Ride Captain Ride” playing as the credits roll. The spoof worked. The point was clear: some works of art were only meant to be what they already are.

Case in point. Sprung at long last from development, director Nikolaj Arcel’s The Dark Tower is more or less what a Dark Tower movie had to be: a palatable, mass-appeal remix of elements from author Stephen King’s acclaimed novels. While King envisioned this series as his version of J.R.R. Tolkien’s Lord of the Rings cycle—stalwarts band together, embark on a mythic quest in the face of long odds—the Dark Tower story exploded beyond its beginnings as a patched Western to include fantasy, horror, time travel, magical realism, historical fiction, meta fiction, science fiction, apocalyptic fiction, and probably a few genres I’m forgetting. The characterizations are dense, layered, and full of allusion. King’s protagonists are neither traditionally charismatic nor altruistic: one’s a drug addict, another suffers from a split-personality disorder, yet another murders every person in a small town. In a sense, the Dark Tower series is the literary equivalent of a 48-hour, cocaine-fueled David Guetta DJ set spun on an Ibiza beach.

The script for the first Dark Tower movie doesn’t attempt to embody this complexity and, in all fairness, how could it have? Its four screenwriters treated it like a comic book adaptation, cherry-picking scraps from various novels then declaring their Frankenstein a $60 million “sequel” to the books. A on-the-fly witch’s brew: snatch the tower Breakers’ town plot from book 7, the Dixie Pig from book 6, the ancient, crumbling train station from book 1, Jake Chambers’ doomed ennui from book 3, Roland Deschain’s physical agony from book 2, the grotesque Low Men from book 5, extraneous references and minor details from everywhere. These 90 minutes leave the viewer gasping for greater understanding and astonished at continuity shortcomings even within this compromised context; you watch and squint, feeling embarrassment for everyone involved, longing for a documentary about the script development process.

The Jake Chambers who actor Tim Taylor is tasked to portray works for the first half of The Dark Tower, when Chambers is an insomniatic, stunned middle-schooler, haunted by Mid-World nightmares he transforms into cryptic illustrations. Once the plot calls for more from him, Taylor can’t even pretend to get it up, and Idris Elba’s stoic gunslinger Roland Deschain—the hero sidelined, so it can resonate as a Young Adult adventure—bears the load as best he’s able. Elba’s steely resolve, intensity, and wizard-level gunplay are dazzling, and could’ve saved the movie, yet it revolves around Jake, who’s assigned abilities the novels never gave him because the script requires it.

Elba isn’t directed to adopt Roland’s folksy, provincial dialect—though a few common phrases are doled out as fan service—likely for the same reasons that Benedict Cumberbatch never had to exclaim “by the Hoary Hosts of Hoggoth” in Doctor Strange. The script errs in elevating and simplifying Jake’s parents—suddenly they aren’t wealthy strivers, there’s a tragically dead dad and a typical douchebag stepfather—and Roland’s own father (Dennis Haysbert) is featured solely as a cameo, an undisguised plot mechanism. So there’s little to do but roll with the punches here, to find small pleasures embedded throughout the misbegotten debacle: how the Dutch Hill mansion has a world-hopping portal outfitted with a Star Trek keypad and a house demon, how Matthew McConaughey sinks teeth into his role as a (newly) mortal sorcerer-cum-doomsday-CEO, that opening sequence where all those kidnapped breaker kids are ordered off of a playground to chip away at the tower. Anyhow: go read or re-read the damn books.