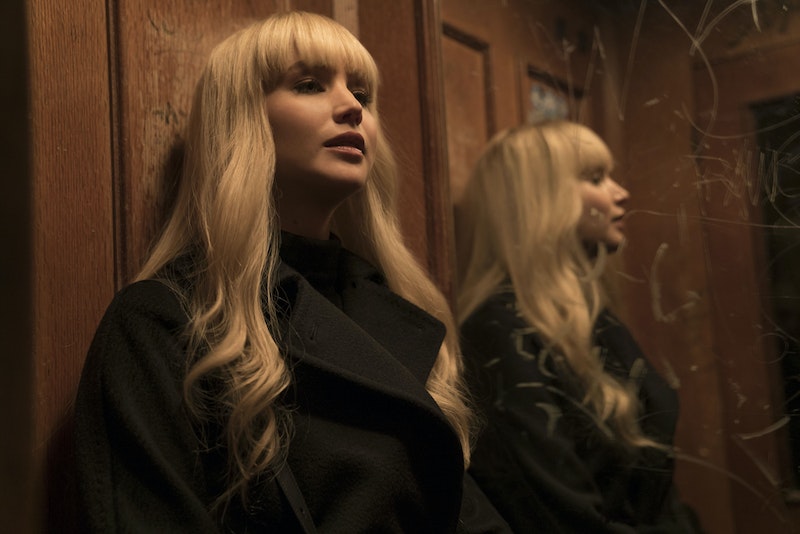 Jennifer Lawrence and director Francis Lawrence (no relation) promoted their new movie Red Sparrow, an adaptation of Jason Matthews’ novel, on the PBS’ NewsHour last Friday. The piece positioned the movie as unintentionally resonant in the era of #MeToo and renewed Cold War politics, and “an important role” for Lawrence to take after avoiding explicitly sexual material after several nude photos of her leaked online in 2014.

They also discussed Lawrence’s essay in Lena Dunham’s Lenny Letter about the pay gap between her and Amy Adams and their male co-stars on 2013’s American Hustle: “Why did I not feel like I deserved to be paid equally? Even though I have kind of a weird job that’s probably not relatable to most, I felt like my mentality on that, if I’m feeling this way, in Hollywood, I can’t imagine how many women across the world must be feeling that, and why don’t we? I had won an Oscar by the time I was doing American Hustle, I had led movies to be number one at the box office, and I was just curious why did I not feel like I deserved equal pay?”

The people working publicity for Red Sparrow are probably thrilled about their good timing putting out a movie about a badass female Russian spy right now, especially after five months of #MeToo and the success of the very dreary and very boring Atomic Blonde last summer. Its nearly eight-minute slot on NewsHour is so absurd and out of place for such a pulpy, gratuitously violent, and sexually explicit film. Positioning this as inspirational is completely nuts, and all they’re riding on is “famous actress finally getting paid her proper millions” for the movie’s worth, because beyond that irrelevant fact, it’s not much beyond a forgotten VOD or future 7/11 dollar bin junk.

You wanna see Jennifer Lawrence break her leg, fuck a lot of other people up, strip nude, have sex, kill people with knives, torture, get tortured, slip in and out of an okay Russian accent, then this is your shit.

And I enjoyed it—but the movie’s graphic and cartoonish violence undermines its source material and the real events it’s based on. Because this is a story most of us don’t know, the embellishments and Tarantino/Eli Roth level of violence and sex make the whole thing ridiculous. Red Sparrow is a tonal mess, completely dissonant, and the two things it wants to be—realist semi-biopic of an unknown, unsung female Russian spy who became an American hero vs. the cheap easy thrills of James Bond movies and their ultra violence and silliness—clash throughout, amounting to 140-minute action movie that takes itself and its “mission” too seriously to ever fully indulge in the fun it so clearly wants to have.