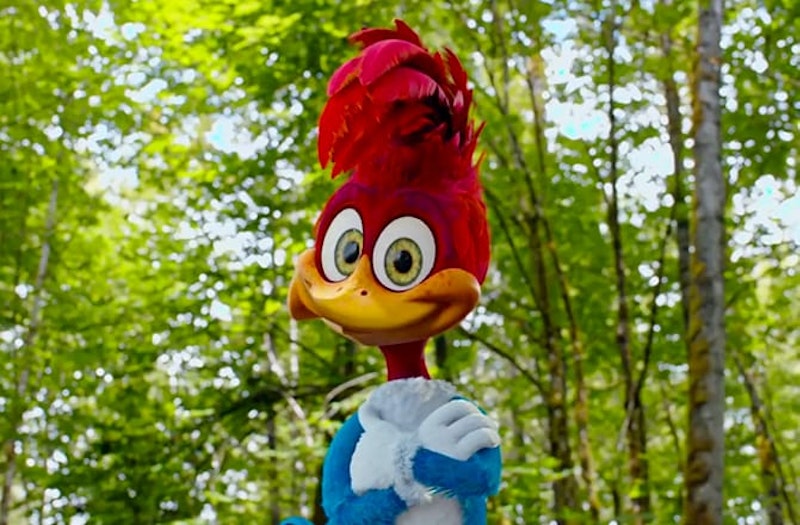 I’ve never rooted for poachers. Poaching is a serious threat to wildlife and deserves prosecution. But somehow, Alex Zamm's Woody Woodpecker film has done the impossible. Throughout every minute of the celluloid nightmare, I was rooting for those who could kill off Woody. But while my ideal cut would be a smash cut to black and rolling credits upon pulling the trigger, the film subjects the audience to bland characters and failed joke after failed joke.

Zamm, who’s known for directing Beverly Hills Chihuahua 2 and Inspector Gadget 2, has written and directed this film like a car accident. The film presents itself as a bog-standard mixture of CGI/live action hybrids in the same vein as The Smurfs and Dr. Doolittle. The film’s problems start with the mind-boggling creative decision to focus on the human characters. This wouldn't matter so much if these characters were interesting, but they aren't. They tick off obligatory genre boxes like being a rich WASP-y family with unspecified father-son conflict.

The second worst creative decision is that none of the human characters can understand what Woody is saying, demolishing all potential comedic parlance. Even the son of the family, who’s the first to sympathize with Woody, doesn't ever form a bond that connects the audience to them. Furthermore, Woody's cartoony physics don’t mesh well with live-action. Scenes involving slapstick with electric shocks or filling up a car with cement come across as frightening instead of funny, making Woody out as a villain.

All that Woody Woodpecker does is make quips and the occasional poop and fart joke, plumbing the bottom of the barrel of cheap humor. This explains the decision to center the human characters: Woody Woodpecker can't carry a film. Woody's inability to talk to humans means that the act two misunderstanding can't be cleared up by the woodpecker. Instead, the audience is put through a screenplay so processed by hitting specific genre beats that it's impossible to treat it as anything other than an example of creatively bankrupt, if safe, filmmaking.