Die Hard in an Upside-Down Car 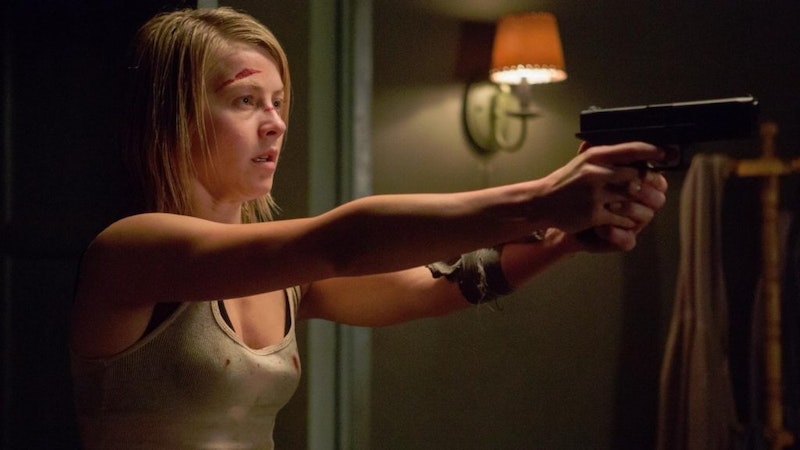 This is part of a series on Blumhouse horror films. The last entry on Split is here.

Die Hard's indelible energy comes from the way that it hysterically flees from a small-scale relationship problem into hyperbolic apocalyptic fantasy. John McClane's marriage is failing because he can't handle his wife's career success. And rather than deal with that, the movie careens into an improbable terrorist scenario, where the wife's boss is brutally murdered and John himself gets to be an awesome action hero who saves his wife and wins the day against the smirking be-suited corporate foreigners upending the American way of life. The film's murderously gleeful focus comes from its headlong rush to escape its own story; the action shenanigans have a feverish conviction because they're trying to distract you from the drab, painful drama.

The 2015 suspense thriller Curve is built around a similar dynamic. Mallory Rutledge (Julianna Hough) is driving her fiancé Brad's truck from her home in San Francisco to their wedding in Denver. This should be a happy occasion, but there are problems. Brad has canceled their honeymoon to Italy at the last minute because of a crisis at his high-powered job. Mallory's much-loved sister Ella (Penelope Mitchell) obviously thinks the wedding is a bad idea.  Mallory keeps taking scenic turnoffs on her way to Denver, trying to put off her arrival at the wedding as long as possible. As a final thumb in the eye, she finds a collection of flyers for strip clubs and/or escort services in Brad's truck. Worse, she's not really surprised; just disgusted.

The movie, then, is about Mallory's relationship with Brad, and her growing realization that she's made a horrible mistake. But rather than talking about that, director Iain Softley turns the wheel hard left, and skids out onto a different route. Just as she finds the flyers, Mallory's car breaks down. She's helped out by a well-muscled, charming hiker named Christian (Teddy Sears). After hesitating to give him a lift, she decides leaving him behind would make her feel guilty, and offers him a ride first to the highway, and then to his motel.

Christian, of course, is not as nice as he seems at first. He threatens Mallory with a knife, and implies he's going to take her to the motel to rape her. Noticing he doesn't have a seatbelt, she crashes the car in the hope that he'll be killed in the collision. Unfortunately (and improbably), Christian’s thrown clear of the wreck without serious injury, while Mallory's leg is wedged into the seat. Unable to move, she’s trapped in the car for days, increasingly desperate for food and water. Christian occasionally returns to the site to taunt her and wait for her to die.

Christian is an obvious stand-in for that asshole Brad. He turns from nice guy to misogynist sadist in the car when he gloweringly tells Mallory he doesn't think she can "deep throat his huge cock." The grossly inappropriate sexual comment is foreshadowed by the sexual fliers Brad inadvertently left for his fiancé to find.

Christian, moreover, is obsessed with the idea of free will and irreversible choices. Mallory, he says, deserves what she gets because she chose to stop and offer him a ride. "You people go through life making these choices that you think have no consequences. I'm here to tell you that they do," he glowers. At the same time, he babbles about how he and Mallory were fated to meet, and how the car breaking down to bring them together had a larger meaning. It all sounds like the contradictory narratives around true love and marriage that you expect from a Hollywood film. Lovers are predestined for each other, and at the same time love is validated as the freest, truest, most adamant choice you can make. Christian sneers that Mallory's own choices, and/or Mallory's fate has trapped her upside down in a car, eating rats and drinking her own urine, just as her own choices, and/or her fate, is about to trap her with Brad, for life.

The final act, inevitably, finds Mallory escaping the car and enacting a bloody and satisfying revenge. She even gets to heroically rescue another kidnapping victim. Christian stumbles into a bear trap, caught in much the same way as Mallory was caught—she repeats his taunting words back to him. Just as McClane reasserts his masculinity at the end of Die Hard, so Mallory reasserts her freedom by doing away with the man who trapped her.

The movie's long middle section, narrowed down to just Mallory and the car, is impressively constricted, and the final burst of movement feels liberating. The problem is that the liberation is never really brought back around to the actual problem, which is Mallory's impending marriage.

In Die Hard, the last scenes are of McClane and his wife reconciled. But in Curve, Brad simply disappears, even as a name. While trapped in the car, Mallory writes a note telling Ella she loves her. Brad isn't mentioned. Does that mean Mallory's going to call off the wedding and dump him? We never find out.

It's not exactly clear how Curve could’ve driven back to the wedding in a convincing manner. A big movie like Die Hard has space for the family drama and the suspense narrative. Curve, wedged into that car seat, has a lot less scope. You can imagine a less naturalistic, more paranoid take, like Blumhouse's Get Out, in which Brad hired Christian to murder his fiancé. Then she could discover the plot and murder both of them at the end. Not subtle—but horror films don't necessarily benefit from subtlety.

Mallory takes her pound of flesh from the murderous stranger in lieu of, rather than as a fulfillment, of her more intimate rage and resentment. That doesn't make for a bad movie. But Curve could’ve been great if it had been willing to take a few different turns.