Film Review: Logan Is Like No Other Superhero Movie 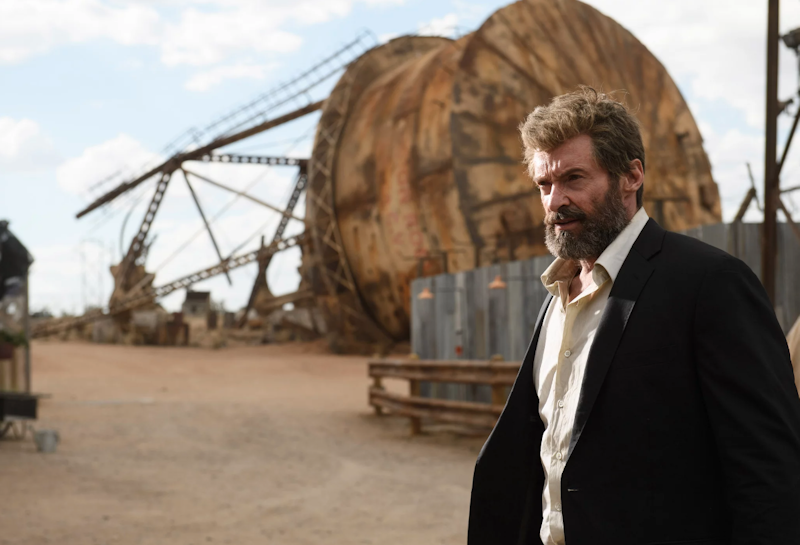 Give Logan this: it looks and feels absolutely nothing like any other superhero movie. It does lose some excitement in the bargain. But despite a pace that lags at times, Logan is a winning effort and a fine sendoff for Hugh Jackman after nearly two decades playing Wolverine. This is Jackman’s 10th time playing Wolverine over 17 years, including two separate underwhelming standalone movies, including one called Wolverine and another called The Wolverine. Logan, directed by James Mangold, is easily the best of the three, one that shows us something new: a superhero, aging and past his prime.

Logan feels less like a typical X-Men movie than like a revisionist Western like Unforgiven. It’s 2029, mutants have all but disappeared from the Earth, and Logan—he’s never called Wolverine at any point—is working in Texas as something of a futuristic Uber driver. He’s soon pulled back into the action, although he’s noticeably older, sporting a beard that makes him look more like present-era Mel Gibson than like himself. The plot pulls in evil scientists (led by Richard E. Grant), a young girl with Wolverine’s powers (Dafne Keen), use of actual X-Men comic books, and also presumably for the final time, Patrick Stewart’s Professor X.

The film gets off to a slow start, but once it gets going it’s got a couple of nifty action sequences, plus a well-done interlude centered on a visit to a family (led by ER’s Eriq La Salle) and a final sequence in the woods that’s as far from the city-destroying, giant-energy-sucking-thing-in-the-sky climax usually favored by recent comic book films, including last year’s abysmal X-Men: Apocalypse.

Hugh Jackman, I’m sure, is ready to move on to other things. Logan is not only his last time playing Wolverine, it’s also his best.

Table 19 is an oddity. It’s an attempt to wed the formula of a slapstick, high-concept studio comedy (as represented by co-producer Shawn Levy), set entirely at a wedding, with the gritty indie sensibility of a mumblecore film (as evidenced by Mark and Jay Duplass, who have a “story by” credit). With the proper execution, this formula could’ve worked. But Table 19 ultimately fails because it can’t handle its jarring tonal shifts. That, and the majority of the plot elements are complete failures.

The plot pivots off of a high concept: The characters are attending a wedding and are placed at the “leftovers” table. Eloise (Anna Kendrick) was the bride’s longtime friend who was exiled from the wedding party after getting dumped by the bride’s brother (Wyatt Russell). Craig Robinson and Lisa Kudrow are a married couple who hate each other, June Squibb is the bride’s childhood nanny, Stephen Merchant is a creepy, disgraced relative, while Tony Revolori (Lobby Boy from Grand Budapest Hotel) plays a teenaged boy whose squawking, never-seen mother apparently sent him to the wedding just to get laid. Throughout the 87-minute running time, the tone shifts wildly on more than one occasion, from fun to pitch-dark to bathos and back again. What’s evident, though, is that the Kendrick/Russell character arc is the only story here even close to worth telling.

Kendrick is good at playing something of a mess, while Russell (the Kurt Russell/Goldie Hawn offspring who was in Everybody Wants Some) does what he can with a character who’s all over the place. The Robinson/Kudrow relationship has its moments but doesn’t end up going anywhere worthwhile.

But all of the other main characters are among the worst in any movie this year. June Squibb is a little old lady who curses and does drugs, just like Squibb does in five other movies. Merchant’s arc is never funny, and wrings most of its laughs out of the possibility that he might be a sex offender. And Revolori’s storyline is the worst of all—why does he keep mentioning that his mom wants him to have sex, and why is that funny?

The writer/director is Jeffrey Blitz, best known for the 2002 documentary Spellbound; his last feature was 2007’s Rocket Science, best known as just the second movie role ever by a young Anna Kendrick.

What’s the only thing I liked about this movie? The wedding had a pretty great '80s cover band. But much like real life, if the band was the best thing about a wedding, it probably wasn’t a very good wedding.