Not Fake News, But Genocide 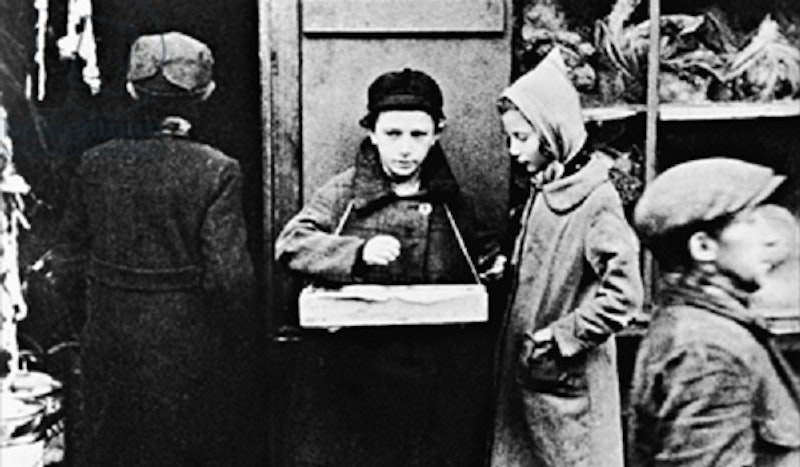 This is the first post in a series on fascist films.

"Fake news" has gone from a disturbing problem to meaningless shibboleth at breathtaking speed. Shortly before and especially after the election, "fake news" was coined to describe inaccurate fictions that circulated as fact on Facebook: stories about Hillary Clinton running a sex ring out of a pizza shop, or (on the left) stories that Trump supporters in Manhattan chanted "We hate Muslims, we hate blacks." But the right-wing media and Trump quickly picked up the terms, and now "fake news" means little more than "a somewhat inaccurate story" or even, "a story I don't like." The slangy term lacked heft, history, and rigor; as such, it was immediately co-opted.

Maybe we should go back to an older, weightier term. "Fake news" may be a neologism, but the phenomenon it describes is not. Hitler and Goebbels churned out fake news long before Facebook. Back then, it was called propaganda.

One of the most famous Nazi propaganda films is the 1940 hour-long documentary The Eternal Jew. It was supposedly closely supervised by Goebbels, and to some extent by Hitler. A bizarre concluding section shows Jewish butchers slaughtering cattle, probably because the vegetarian Hitler thought these scenes would repulse a German audience.

The butchering is a good shorthand illustration of why "fake news" is a poor substitute for "propaganda." Jewish butchers do slaughter animals; this isn't a "fake" story in that sense; it's something that happens. The Eternal Jew even cites Jewish defenses of the practice, and shows editorials by rabbis explaining that kosher slaughter is humane. The accurate footage, and real arguments, are presented in the context of a film that refers to Jewish people as "the parasite nation of Judah." The film doesn't even have to lie. It just has to make clear, with little subtlety, that the point is not truth, but hate.

Julia Serano has pointed out that prejudice works through marking particular individuals as wrong, and then attributing everything they do to that. All people have to make a living, but when Jews buy or sell or trade, it's seen as evidence of their iniquity. All people travel; humans are a peripatetic species, and immigration is one of the constants of our history. Yet in The Eternal Jew Jewish migrants are compared viscerally to rats and vermin, and presented as spreading disease and filth. Jews are evil, so everything Jews do is evil.

The film sneers at Jews for being tribal and separatist. There are numerous scenes of crowded Polish ghettoes and dirty Jewish homes, which are presented as evidence of Jewish debasement. But it also shows celebrated and successful Jewish bankers, artists, politicians, and diplomats, all of whom are presented as evidence that the Jews are sneakily trying to assimilate. "These Jewish kings of finance… look almost like genuine Americans," the narrator sneers. "Jews are forever foreign bodies in the organisms of their host peoples." When Jews don't assimilate, they're blamed for being tribal and separate; when they do assimilate, they're blamed for being sneaky and duplicitous. "The essential trait of the Jew is he always tries to hide his origin when among non Jews." The issue isn't that the information is fake: Bernard Baruch was in fact an American banker. The issue is that facts are presented in a context of conspiratorial propaganda, designed to justify hatred and mass murder.

Of course, The Eternal Jew is filled with lies as well. The film cites obviously fabricated statistics about Jewish criminality, making the ludicrous claim that 98 percent of prostitution worldwide is controlled by Jews. That percentage dares viewers to disbelieve. The point isn't whether people actually buy the message in its entirety. No doubt some viewers at the time said things like, "The Nazi party makes an extreme case; no doubt the Jews are involved in criminal networks, but…" Such a reaction would be entirely in line with the film's goals, which have little to do with facts and news, and everything to do with emotion and assent to analogy. Jews are like rats; Jews are like criminals; Jews are like communists. That's more important than any particular takeaway statistic.

Trump lies all the time, even about trivial matters like the size of his inauguration crowd or his electoral vote margin. But lies, or fake news, are less important than his commitment to sowing hate through propaganda. When Trump invites the relatives of those killed by illegal immigrants to a speech, it's not fake news. People have had relatives killed by immigrants; Trump is really inviting some of those people to his speech.  While it's not fake news, though, it’s propaganda for hate. Immigrants are less likely than citizens to commit crimes. By bringing relatives of those murdered by immigrants to his speech, Trump is finessing that context, and tarring immigrants as murderers. He's associating immigrants with criminality—just as the Nazis associated Jews with criminality seventy years ago.

Fascists traffic in untruths. But the point of fake news is never simply to spread falsehoods. As The Eternal Jew makes clear, fascists orchestrate lies, truths, opinions, and smears in the interest of unifying a community of hatred. The conclusion of The Eternal Jew shows Germans cheering, saluting, and marching. The film attacks Jews in order to call the German people to their heritage; it shows Jewish butchers in order to lead white people to embrace slaughter. Fascist propaganda isn't dangerous because it's a lie, but because it seeks to impose a new truth, from which all impurity has been erased. The Eternal Jew is not just fake news; it's a story. And the title of that story is genocide.