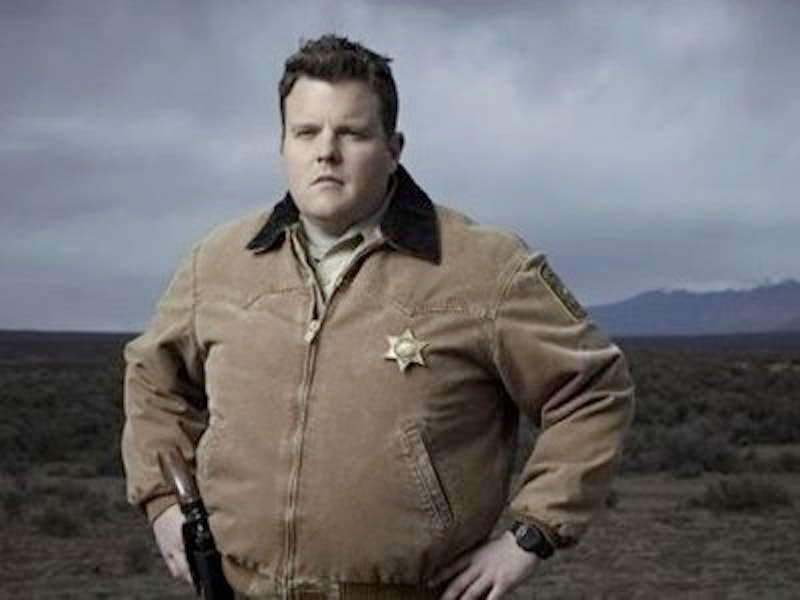 Ferg’s community garden turns out to be more than he can handle. Cady laughs inappropriately during a job interview. Vic yells at a bald eagle. Walt and Omar team up to solve a string of murders that’ve been disguised to look like trout attacks. Barlow’s estate produces a court order requiring Walt to display his nude bottom to a special master chosen by a district judge (Stephen Root).

Shortmire plans to blow up the Snake River; Walt teases Branch by calling him “Brunch,” then becomes wistful when he remembers that Branch died (?). Vic startles a buffalo while attending Hatha yoga with Travis. Supervillain rancher Miven Mundy (Ron Perlman) and his militia seize the Lame Elk Wildlife Refuge and Historical Gift Shop. They refuse to leave until the federal government meets their demands: return of federal grazing lands to a public trust, increased accountability in the National Parks Service, better representation of the American farmer in Washington, a concrete plan for promoting the growth of sustainable agriculture in a federally subsidized “farm to table” system, one trillion dollars in gold krugerrands, and a submarine. Walt frowns.

Longmire goes to the hardware store but won’t tell the owner what kind of tools or screws he wants and they both end up staring silently into the pitiless grandeur of the Wyoming wilderness. Ferg uncovers a bolo tie smuggling ring at the DMV. Vic begins to suspect that Jacob Nighthorse orchestrated the pine tar explosion at the Whispering Gull Ranch. The Mundy gang calls Walt’s office to ask if anyone knows where the extra K-cups are in the Lame Elk Historic Breakroom, and also they really hope they’re not in the locked cabinet because one of the more melted-looking Mundy clan members threw all the keys into a ditch which, for unrelated reasons, is now filled with raw sewage.

A body turns up at a truck stop and Vic and Walt must solve the crime based only on a Sony Minidisc player found among the victim’s effects. Vic thinks that it’s ironic, but Walt isn’t certain. Meanwhile, Vic’s ex-husband dies on the way back from the store.

Escaped convicts menace Henry while Walt gloomily looks back and forth between two similar French presses at Target. A surprise guest selected from a database of actors who appeared on Deadwood causes trouble at the Busy Bee. The Mundy gang standoff attracts reporters from Vice who irritate Walt by pulling sick caspers and ollies on the bench where that one guy died in season three. Girlmire and Gothmire try to cheer Cady up by taking her dancing but the evening turns tragic when they find a murder victim hidden inside a mechanical bull.

Walt backs a kickstarter campaign for an $85 box that you can keep your dead wife’s ashes in, but they call it a “consumer story,” or something and you have to post about it on Facebook in order to “unlock” getting a lid with it. Vic finally catches the bighorn sheep (Yannick Bisson) who started all those fires. A talking rabbit tricks Henry into giving up the deed to the Red Pony again. In a flashback we see Walt, Shortmire and Mediummire all standing in a row. Shortmire remarks that Walt is the tallest, followed by Mediummire, with Shortmire in last place.

S06E07—“Kingcrafts of the Wicked Sea”

A visitor from Mega City (Judge Dredd) drives Longmire crazy with his picky criticisms before the big Mongoose River Rib Contest. Matthias’ plan to blackmail Walt falls through when the Longmire sex tape turns out to be six hours of Walt staring at a mountain. Cady’s legal defense clinic faces a moral dilemma over the star-crossed case of a rodeo architect who has fallen in love with a whitewater rafting tour guide. The Mundy gang asks the Internet for help programming the Lame Elk Historical DVR. In a cliffhanger ending Detective Fales charges Vic’s baby with murder.

Vic almost falls for Shortmire’s trap (a fake tunnel painted on a wall) but at the last minute is kidnapped by Peter Stormare, who has been released because the court that convicted him had the wrong thread count flag fringe. He forces Vic to listen while he pronounces the word “bologna” 1000 times. Lucian (Peter Weller) makes Walt attend a cowboy burlesque show, which turns out to be slightly more depressing than it sounds. Henry struggles with a second hand Horchata machine which turns out to be evidence in a field stone fireplace robbery and the murder of the heir to a silver jewelry and unattractive vest fortune. Walt expresses his quiet rage by building a set of Windsor chairs. Boyd and Ava recruit a crew to rob the pottery museum where Walt’s wife used to volunteer.

Mirror Universe Branch (Brandon Routh) checks in with the gang, still looking for the golden Chevy Suburban that will allow him to return home. Vic chases a pronghorn poacher known as “El Fango Corto.” The Mundy gang issues a worldwide plea for Coldwater Creek catalog gift cards. Walt’s psychiatrist girlfriend and his rich blonde girlfriend run into each other in a coffee shop and realize that they’re the same person in a kind of The Black Swan scenario, assuming that that’s what The Black Swan is about. The Irish Mafia threatens to expose one of Hank’s secrets but backs down when Hank calls their bluff by pointing out that no one could possibly keep track of or understand his secrets.

Shortmire threatens to blow up the WHITE HOUSE ┃ BLACK MARKET in Jackson Hole. A ring of dinosaur bone thieves kidnap Walt but later realize that they took a block of teak by mistake. Jacob Nighthorse’s trout smuggling ring attempts to keep Branch quiet by farting on his pillow until Sam Poteet remembers that Branch drowned (?) or his dad shot him (?) Vic’s old frenemy Ed Gorski returns to defuse the Mundy gang occupation by hurling himself into the Lame Elk Historical Lord of the Rings Style Lava Flow.