Thoughts on Get Out, the debut film from writer/director Jordan Peele. 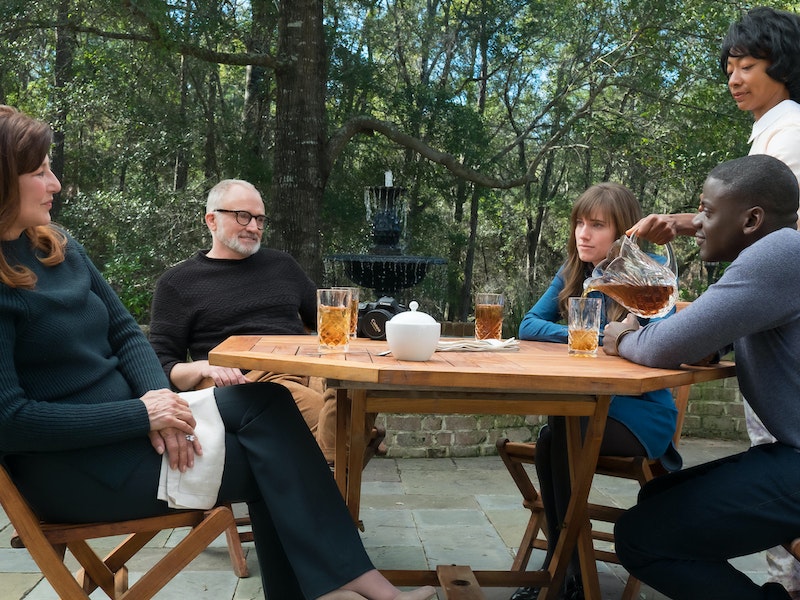 Whenever I think of Catherine Keener, I think of her smile, and of her teeth. There are too many teeth there, too close-set, so that the smile becomes the equivalent of an especially debilitating animal trap, camouflaged by leaves. Does Keener ever truly smile, mouth open, teeth bared, in Get Out? I don’t recall; it probably doesn’t matter, but it feels significant, and that smile—or the suggestion of that smile—must have been central to Keener’s casting in a movie where her relaxed affability is key to the overall conceit.

Young black man leaves the city with his young white girlfriend to meet her parents in the affluent countryside, awkwardness naturally occurs, but what if evil? Yeah, yeah. You already know this, but I’d urge you to go see Get Out anyway, even if it wasn’t alternate-timeline 2017. Daniel Kaluuya already aced the role of a woke cog in a rigged speculative-fiction machine on an early Black Mirror episode and that of a skeptical outsider in Sicario; when writer/director Jordan Peele places him in the protagonist’s chair as Chris Washington, he carries the movie on increasingly tense shoulders, as a fish-out-of-water suitor whose paranoia proves to be all too justified.

As hyper-privileged, happy-go-lucky Rose Armitage, Allison Williams embodies a particular type as expertly as Keener and Bradley Whitford nail her parents as chill, affluent liberal stereotypes. Lil Rel Howery enters Get Out as it’s almost obligatory comic relief and exits as its hectoring, unlikely voice of reason. The less you know about the plot before seeing the movie, the better, but the breadcrumbs Peele drops en route to the third act not only matter, but in many cases reflect the lived experience of people of color: the unwanted touching, the butchered slang, the inappropriate attention, the assumption that one plays and excels at sports.

These things actually happen, every day, to actual people, so it’d be irresponsible to label them—to say nothing of every other cultural idiom awaiting those who haven’t yet seen this movie, I’m not even scratching the surface with this piece—cinematic subtexts. Horror buffs will high-five incessantly over genre references; historians, amateur or professional, may nod gravely to themselves.

What I find myself fixated on are the small moments that slowly add up: teaspoons gently rattling in teacups, pointed musical cues, one character’s abandonment of a charade, a low-grade infomercial produced for an extremely exclusive audience, how darkness in the Armitage home seems to breath. Mark the scene where Chris confronts the Armitage family’s maid (Betty Gabriel) over an unplugged phone, and the things that happen to her face. Mark a tense exchange, early on, between Rose, Chris, and a police officer. Mark them; they’re signposts, and they’re the trap.