Fascism and anti-fascism in Casablanca. 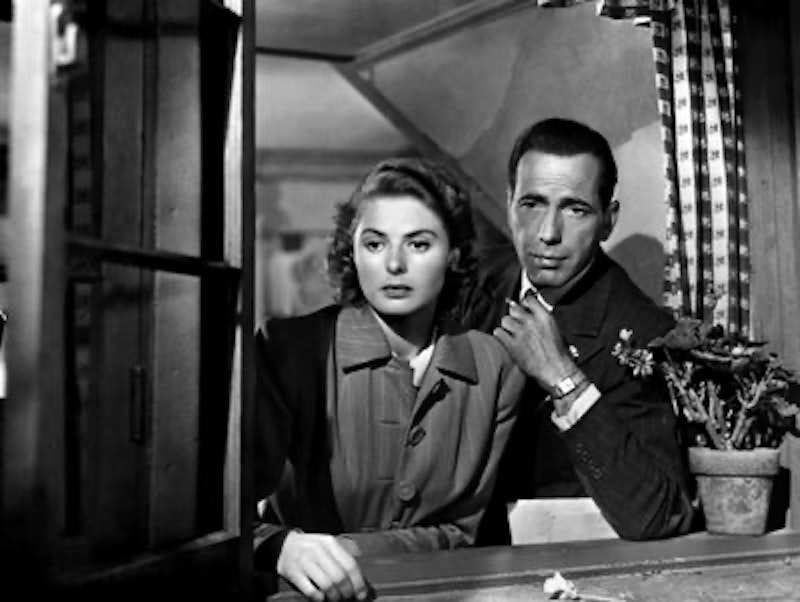 This is part of a series on fascism in film. Last week's entry, on The Eternal Jew, is here.

In the 1940 Nazi propaganda documentary The Eternal Jew, the Jewish Austrian actor Peter Lorre makes a brief appearance; the film suggests he’s a deviant because he played a child-murderer in the infamous 1931 sensation M. Two years later, Lorre appeared in the classic anti-fascist romance Casablanca. But, fascist or anti-fascist, the representation of Lorre is uncomfortably similar. He’s shown as a sniveling, untrustworthy, deviant foreigner. "You despise me, don't you?" Lorre as Ugarte snivels to the manly Rick (Humphrey Bogart)—a self-loathing, needy, and vaguely sexual come-on. "If I gave you any thought I probably would," Rick replies, wholesomely dismissing the filthy, rat-like Jew/foreigner/homosexual.

The barely sub-textual anti-Semitism in Casablanca isn't an aberration. Though the film is forthrightly anti-Nazi, it shares many fascist presuppositions and prejudices. For example, Sam (Dooley Wilson), the black piano player at Rick's café, is treated by the film and his white acquaintances with benevolent but unwavering contempt. His entire emotional life is defined by his concern for his employer. He has no romance of his own, but is treated a kind of mascot to the stormy love affair of Rick and Ilsa Lund (Ingrid Bergman)—the later of whom refers to Sam at least once as a "boy." Rick makes difficult choices about whether to join the resistance and how to confront fascism; Sam just trails along beside him, a secondary de-sexualized sidekick.

For her part, Ilsa takes a traditionally gushy woman's role, resisting fascism by inspiring men like Rick and Czechoslovakian activist Victor Laszlo (Paul Henreid) to noble deeds. The one time she pulls a gun, she can't fire it. The turning point of the film is when she tells Rick, "You have to think for both of us. For all of us." Her earlier jilting of Rick is forgiven when she verbally and mentally submits to him.

In Casablanca the counter to Nazism is Rick's virile American white masculinity—and an imperial French patriotism. The film's iconic moment of solidarity occurs when a group of Nazis bursts into nationalist song in Rick's café. Laszlo, with Rick's assent, tells the musicians to play "La Marseillaise," and the entire collected crowd bursts into an enthusiastic rendition. It's stirring… but you have to wonder whether everyone in that café would be stirred. France, after all, invaded North Africa to impose colonial, and not incidentally racist, rule, just as the Nazis invaded France. "La Marseillaise" is an anthem of freedom, liberty, and equality for some, but in a place like Casablanca, not for all.

You might think that Hollywood would want to paper over its own sympathies with fascism in 1942, when America had finally declared war on the Nazis, and beating Hitler was a communal project. But that's not exactly the case. Laszlo is a committed, courageous, consistent anti-fascist, who has dedicated himself to the cause and suffered for it in a concentration camp. But he's not the star of the movie. On the contrary, he's presented as something of a stiff.

Instead, the film, like Ilsa, prefers Rick—the bad boy amoral Han Solo to Laszlo's squeaky clean Luke Skywalker. Rick repeatedly insists that he doesn't "stick his neck out for anyone," and sure enough, he doesn't warn Ugarte when the police are about to arrest him. More, he initially refuses to help Lazslo escape from Casablanca out of pure spite. He doesn't want to fight fascism because his romance didn't work out; like many an MRA turned alt-righter, his misogyny and self-pity lead him to fascism.

Rick's also on friendly terms with Louis Renault (Claude Rains), the corrupt collaborating French official. Louis is presented as an attractive character—witty, cynical, worldly, amusing. Even his penchant for strong-arming women into sleeping with him in exchange for passage to America is limned as a cute personal foible. Sexual harassment and abuse, aiding and abetting fascists, using an official position for personal gain, Louis isn't appealing despite such moral missteps. He's appealing because of them. His compromise with Nazism and evil, like Rick's compromise, makes him interesting and complicated, unlike do-gooder Laszlo. For both Louis and Rick, conversion to the resistance at the end is as all the more satisfying and interesting because of their earlier sins.

Casablanca is, inevitably given the time of its release, a metaphor of American involvement in the war. Rick, like his country, is slow to embrace anti-fascism. But he has, we’re assured, a good heart, and eventually does the right thing and joins the resistance, leading to decisive victory with Laszlo's escape. You could, charitably, read Casablanca as saying that the resistance needs vacillators too. Yes, some anti-fascists are racist; some are imperialist; some are sexual abusers. When the hour is dire, everyone must come together. In our current context, Casablanca looks like a call to leftists and Democrats to embrace John McCain and David Frum. At this difficult moment, we need every centrist shithead and imperialist Bush collaborator we can get. You can't be too picky about your allies.

Casablanca isn't an exercise in realpolitik though. It's a romance. Its goal isn't to encourage compromise and broad coalitions, but to make resistance sexy—or to use resistance to make Bogart sexy, as the case may be. The film's imperialism, misogyny, racism, anti-Semitism, and general wishy-washiness are not presented as a bug, but a feature. The ideal outcome of the fight against fascism is not a free North Africa, but a French one. It's Jim Crow racism rather than the Holocaust.

Anti-fascism in Casablanca is nostalgic and conservative; it wants to turn back the clock and restore an earlier, sepia-tinged order. "We'll always have Paris," Rick tells Ilsa. As Louis says, Rick is a sentimentalist, which is not the same as an idealist. He, and the film, dream of reconstituting a lost past, not creating a better future. Someday, Casablanca says, the Nazi stronghold will be broken. Then men will be men, women will be women, French colonies will be returned to France, and the world can unite guiltlessly in despising people like Peter Lorre, née László Löwenstein.