Great performances and original music. A 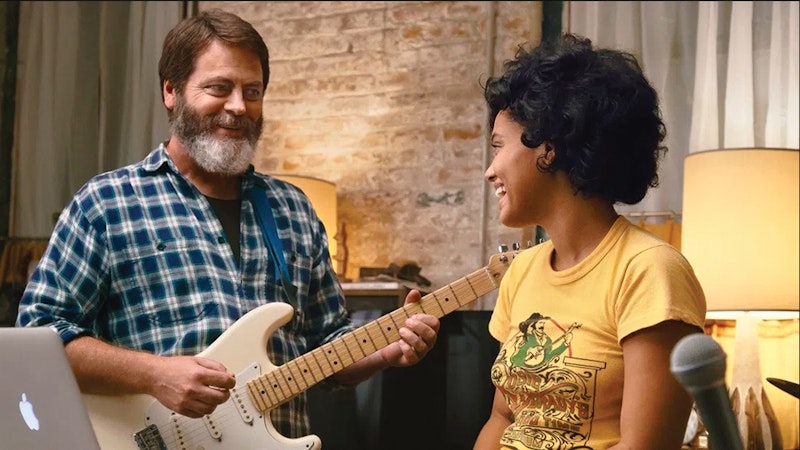 Hearts Beat Loud could’ve gone wrong. It’s the twee father/daughter tale, centered on an aging hipster with antiquated musical tastes. It’s a Sundance also-ran, set in a gentrified corner of Brooklyn, starring an actor better known for comedy in a dramatic role. These are all elements that’ve been part of many horrible movies in the past.

In fact, Hearts Beat Loud it’s one of the more heartwarming movies of the year, helped by top-notch original music and a pair of winning performances from Nick Offerman and Kiersey Clemons. Directed by Brett Haley (who made the outstanding I’ll See You In My Dreams) and released by the upstart distributor Gunpowder & Sky, Hearts Beat Loud is an earnest, music-filled, from-the-heart story in the tradition of John Carney’s Once.

Offerman, in his first lead role in a movie, stars as Frank, a widower who runs a failing record store in gentrifying Red Hook, Brooklyn. Living with his gay, biracial daughter Sam (Clemons), who’s about to head across the country to medical school, Frank hasn’t quite given up his rock star dreams, especially now that he and his daughter are writing songs together.

Also in the film are Sasha Lane as Sam’s girlfriend, Toni Collette as Frank’s landlord and potential love interest, Blythe Danner as Frank’s ailing mother, and Ted Danson as, yes, a bartender (albeit a 60-ish stoner who’s very far from Sam Malone.)

It’s refreshing to see a film that’s so sweet and earnest without succumbing to corniness. It’s also wise enough to allow us to root for Frank’s rock star dreams while acknowledging that they’re a bit silly. And it’s a movie set in Red Hook that’s not obnoxious about gentrification, and about a record store owner which lacks the protagonist-is-an-asshole-but-doesn’t-know-it problem that hurt John Cusack’s High Fidelity.

What really makes Hearts Beat Loud go, though, are the two lead performances. Most know Offerman as Ron Swanson on Parks & Recreation and he’s had a respectable run of smaller movie roles; his turn as a medieval lord in last year’s The Little Hours was probably my favorite. Here, though, he steps front and center and, wearing a big beard, makes the most of his chance. It’s heartbreaking work that shows new dimensions of what Offerman can do on screen.

Matching him is Clemons, immensely appealing in everything from Dope to Neighbors 2 to last year’s otherwise unwatchable The Only Living Boy in New York. Like Offerman, this is her best movie role to date.

Some original songs from Keegan DeWitt are quite good as well, especially the title track; it’s one of those songs that gets repeated throughout a movie and gets better the more times we hear it.

In between the superheroes and dinosaurs this summer, Hearts Beat Loud deserves a chance.

The China Salesman is Abysmal. D

The China Salesman is more interesting for what its production and creation says about the movie business today, than for anything that happens on screen. It’s a footnote, but an instructive one. The film, known in some parts of the world under the title Deadly Contract, stars a couple of big names: Mike Tyson and Steven Seagal. How does it get around that both of these men are decades past their primes, neither of them is especially known for their ability to speak, and Tyson isn’t even really an actor? That’s simple: Both of their characters are fairly ancillary to the plot, they both disappear from the film for long stretches, and when the two men inevitably fight, it’s edited to an absurd degree, to the point where I’m not convinced the two of them were ever actually in the same room.

Most of all, it’s incredibly weird. Directed by Tan Bing and set in an unnamed African country in which it very clearly wasn’t actually filmed, The China Salesman was produced by a large consortium of Chinese production companies and carries with it the unmistakable whiff of Chinese government propaganda.

The plot, allegedly based on a true story, has a heroic Chinese cell phone salesman (Dongxue Li) seeking to bring cell phone service to the African country, and stumbling into a civil war in the process. He has a blonde American female sidekick who might as well be wearing a nametag that says “Ivanka Trump,” and the plot is heavy on tech industry jargon. The China Salesman features a lot more dialogue about the GSM and CDMA cell phone standards than any action film should.

Tyson’s character is a “tribal leader,” which is a casting failure in every way except that it finally finds a convincing narrative explanation for the ex-champ’s facial tattoos. Seagal is a mercenary, and plays the part with the same mumbling countenance and slow movement that’s been synonymous with most of his latter-day work.

When they fight, it’s supposed to recall the Roddy Piper/Keith David never-ending fight in John Carpenter’s They Live, but the fight is a disappointment, and not only because of the men’s differing styles. Like most of the action in the film, it’s choppy and incoherent.

A Chinese action film starring Steven Seagal and Mike Tyson should at least have a crazy spirit, or maybe unintentionally hilarious. But The China Salesman can’t even get that right. Instead, it’s like the Chinese version of a jingoistic American 1980s movie like Red Scorpion.