Innocence Paralysis in Count the Hours 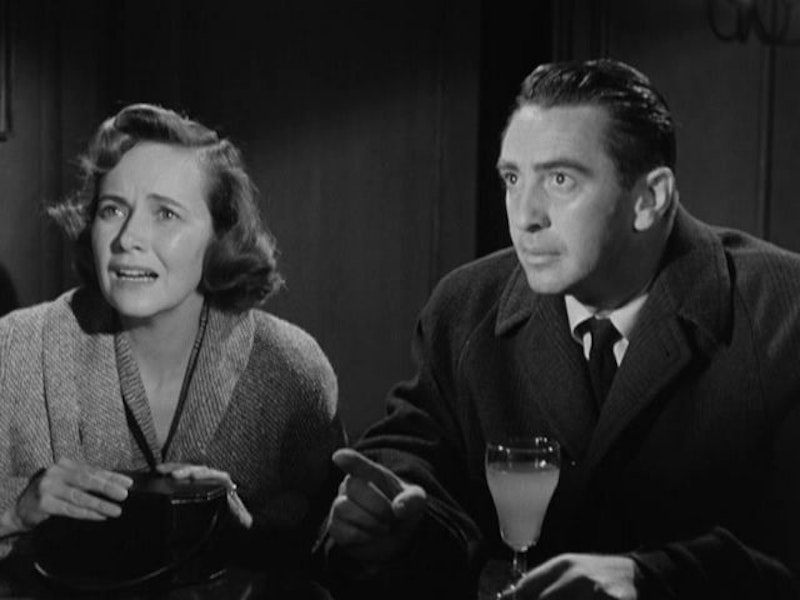 Teresa Wright was nominated for three Oscars in the first two years of her career, winning one for William Wyler’s Mrs. Miniver (1942). Her career was hobbled in 1948 due to a public falling out with Samuel Goldwyn. She continued to work until 1997 to little acclaim or notice.

Teresa Wright’s the only actor I’ve ever encountered that’s made me seek out every film they appeared in, no matter how lousy or obscure. Shadow of a Doubt is one of my favorite movies, but I won’t be writing about it or The Pride of the Yankees or the three films she made with William Wyler (The Little Foxes, Mrs. Miniver, and The Best Years of Our Lives). This column will focus on movies that Wright appeared in and were quickly forgotten—more or less everything she made after 1946. Wright was “a shamefully neglected talent” railroaded by a bitter studio head and struggled to land roles and scripts that were up to her caliber after 1950. But there are gems scattered throughout her six-decade career.

Count the Hours (1953) is such a strange film, barely feature length at 76 minutes but completely engrossing and very scary. It’s the classic “innocent man damned by mob rule” nightmare: George Braden (John Craven) is accused of murdering his landlord, and as the police question him, his wife Ellen (Wright), throws his gun into a lake in a fit of panic, afraid that once they find it they'll convict him without checking the balistics. She’s spotted and they’re both arrested, held for 16 hours until George makes a false confession just so that his wife can go home free.

Doug Madison (Macdonald Carey) is their guardian angel of a defense attorney, at first unconvinced by Braden’s insistence on innocence, and only swayed when he finds Ellen in a full diver’s suit searching endlessly for the gun that she threw in the lake that could prove her husband’s innocence. He’s further encouraged in his cause after seeing the way his neighbors and fellow townsfolk treat the Bradens, and especially after a repairman attempts to rape Ellen in her own house.

This was one of director Don Siegel’s early films, two decades before Dirty Harry, The Beguiled, Escape from Alcatraz, and only three years before Invasion of the Body Snatchers. So many of these Teresa Wright movies I’ve seen are awkward, poorly-written, lacking in personality, or all three. Count the Hours is the only one that comes close to Shadow of a Doubt and The Best Years of Our Lives in its visual acuity, technical inventiveness, and emotional complexity.

Siegel liberally uses lighting techniques borrowed from German Expressionism: every shot in the prison is striped in harsh black and white, shadows of cell bars canted and twisted. Cinematographer John Alton only agreed to shoot the movie if his salary was doubled, and as a compromise he promised not to use any overhead lighting. The result is a rich and high contrast black and white, a punishing atmosphere that contributes heavily to the movie’s grim march toward the gallows.

Siegel and Alton also employ some shocking close-ups and editing choices that seem years ahead of their time. When Wright’s character is nearly raped by a repairman, they cut to an extreme close-up of his unctuous wide-eyed face, and then to an even closer shot of her realizing what’s happening and screaming, contorted and over the top. The look and feeling of this movie most reminded me of Orson Welles’ Touch of Evil, released six years later: it has the same dreary dreamscape full of persecuted people unable to complete, unable to move on or move forward, unable to properly articulate themselves, besieged by suspicion and constantly surveilled.

Count the Hours is proto-Lynchian, with a grainy high contrast black and white not that far off from Eraserhead, and the motif of the darkness lurking within a “wholesome” small town in America. And again, unlike so many of these other Teresa Wright movies, Count the Hours has some indelible and upsetting images and exchanges: Macdonald Carey’s character walking up behind Wright’s character as she emerges from the lake in a full body diver’s suit, her head and face covered by tight white latex. Carey and Wright are abused and mistreated by their neighbors, and they’re portrayed as vile jackals and vultures, missing teeth and throwing bricks through the windows of “that killer’s wife.”

There’s a happy ending, though an odd one: Wright disappears in the final 10 minutes of the film, having given birth to her husband’s child as her lawyer waits for her in the lobby. Everyone is constantly on the verge of infidelity, and Carey’s character is put through numerous trials of temptation with practically every woman he encounters, from Ellen, to the girlfriend of the actual killer (Adele Mara), to his own fiancé (Dolores Mann), who nearly leaves him after suspecting he may be having an affair with Ellen. All of this amounts to Twin Peaks in miniature, and crude as it may be for a low budget film from the early-1950s, Count the Hours does summon that awful feeling of being stuck in a dream and condemned for no clear reason, just like After Hours and The Exterminating Angel.

I have a hard time articulating why I find Wright's performances so phenomenal no matter how lousy some of her movies are. Here she's co-starring with Macdonald Carey again 10 years after Shadow of a Doubt. Carey shows his age, but she doesn’t look a day older. Yet in films released in the same period, like The Actress or Something to Live For, she practically plays a grandmother, dotting on bratty teenagers and dealing with alcoholic and cheating husbands with bags under her eyes and the weight of the world shown in her face. Yet here, in one of the bleakest stories she appeared in, Wright’s indefatigable, weary but unstoppable and fiercely loyal to her lawyer and her innocent husband. Here’s a trailer for the film, which isn't available for streaming anywhere and can only be found on DVD at the moment.