Working With the Beatles

The working class fantasy of A Hard Day's Night. 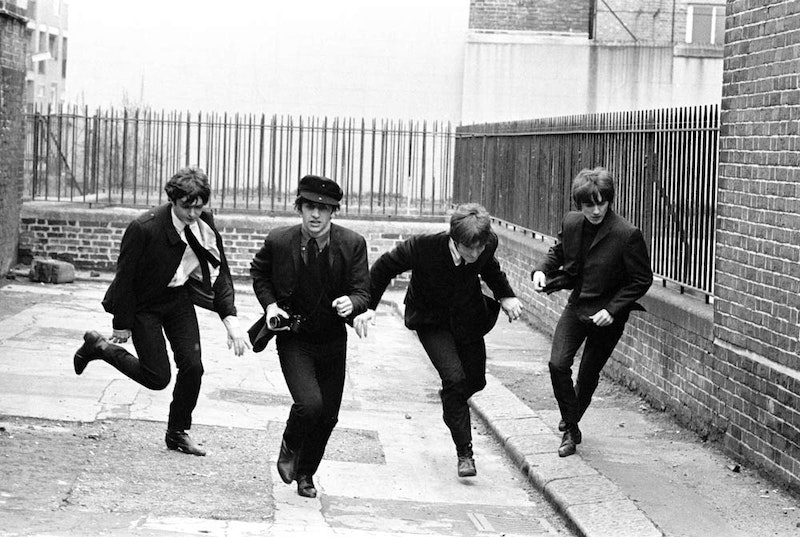 This is part of a series of posts on 1960s comedies. The previous post on The Italian Job is here.

The song "A Hard Day's Night" is about work—or more precisely, about the joy of not working. "It's been a hard day's night/and I've been working like a dog," the narrator exclaims, and then goes on to talk about how good it is to stop working and come home to his wife/girlfriend. The song isn't just about love, but also free time, which is freedom.

The film A Hard Day's Night is less straightforward about its themes, but it’s also about escaping from the drudgery of labor. The plot is loosely structured around the four Beatles—John, Paul, George, and Ringo—traveling to London from Liverpool to put on a live broadcast performance. The Beatles’ manager Norm (Norman Rossington) tries desperately to keep the four on task, insisting that they answer fan mail, stop flirting with girls, and show up to gigs on time. But the Beatles are insouciant and irrepressible, and run off at every opportunity on the wings of Richard Lester's witty quick cut direction to dance at parties or frolic in fields. "We've broken out! Ah, the blessed freedom of it all!" John mugs. The Beatles are rebels who can't be constrained by bourgeois expectations.

A Hard Day's Night was an important milestone in linking the allure of the rock star to goofing off. As Matt Stahl writes in Unfree Masters: Recording Artists and the Politics of Work, "The stars of popular music often appear to be so free and to be doing such enjoyable, expressive, and fulfilling work that it almost seems strange to think of them as working people." More, Stahl says, the excitement of a rock star's performance is closely linked to this performance of freedom. The pop star, he says, "enacts forms of expression, autonomy, and desirability, seeming to encapsulate some of our society's most cherished virtues and values."

The Beatles seem to be defying expectations and avoiding responsibility. But that freedom is a kind of pandering. Their fans, chasing them breathlessly into alleys and over fences, want them to escape. Paul's grandfather (Wilfrid Brambell) is speaking on behalf of the viewer when he goads Ringo into acts of rebellion. The Beatles’ drummer just wants to sit and read his book quietly, but Paul's grandfather demands that he embrace the role of romantic hero. "You? Living? When was the last time you gave a girl a pink-edged daisy? When did you last embarrass a Sheila with your cool, appraising stare?" The old man insists that Ringo should be out "Parading the streets! Trailing your coat! Bowling along! Living!" Paul's grandfather wants to live vicariously through Ringo—and finally Ringo agrees, heading out into the London streets when he should be prepping for his on-air performance.

Ringo isn't really avoiding his responsibilities. On the contrary, he's working at the job of pretending to not work. The Beatles on film are being paid to be in a film; their job is to pretend to be avoiding their jobs. Or, as Matt Stahl says, "The recording artist embodies a paradox… [he] is both autonomous and the target of control." The Beatles are free to leap and roll about in that field, playing like children, and sneering at the bourgeois git who tells them, "This is private property." But this is all performed for a fee, at the direction of canny marketers and managers, not to mention Richard Lester.

The Beatles perform faux freedom when they're actually workers. But they also, oddly, perform a kind of faux subservience. Norm acts like a kind of parent, chastising and scolding the Beatles in the film, with little acknowledgement that they are, at this point in their careers, wealthy and powerful. Norm acts as if he’s the Beatles' employer, when the truth is much closer to the reverse. The band's staged rebellion is predicated on a staged status quo; they’re pretending to liberate themselves from a pretend hierarchy.

The film obscures the Beatles' status as workers, but also their status as employers. It papers over both their labor and wealth. When they launch into a musical number, they do so not because they’re ordered to, and not to make money for themselves, but simply out of pure joy and enthusiasm. The quick cuts to the beat, spawning the modern music video, makes the whole world rock ‘n’ roll with carefully orchestrated spontaneity.

The Beatles were working class kids who became multi-millionaires. A Hard Day's Night reenacts their success, as they wiggle out from under the thumb of various bureaucrats and managers with their own music playing in the background.

But at the same time as the film dramatizes the movement up the class ladder, it also obscures it. The Beatles don't have to scramble or work for their freedom; they notably skip the practice session for their concert. And when they do succeed, it’s done without any of the hallmarks of power—they don't ever order anyone around. In the fantasy world of A Hard Day's Night, our heroes are neither exploited nor exploiting. "Can't buy me love," they sing cheerfully, in a world where, to all appearances, no one buys or sells anything, and no one is bought or sold.

The sleight-of-hand trick is a bit exasperating. The Beatles aren't really free of capitalism; they're successful businessmen, and it's annoying for them to pretend otherwise. But magic tricks also provoke wonder. Even when you know you're being lied to, it's hard not to marvel at the illusion. A Hard Day's Night asks you to imagine a world with no labor. What would it be like to work without alienation—to evade the boss without becoming one yourself? The Beatles don't know from personal experience. But they suspect it would feel all right.