The Producers is overly optimistic. 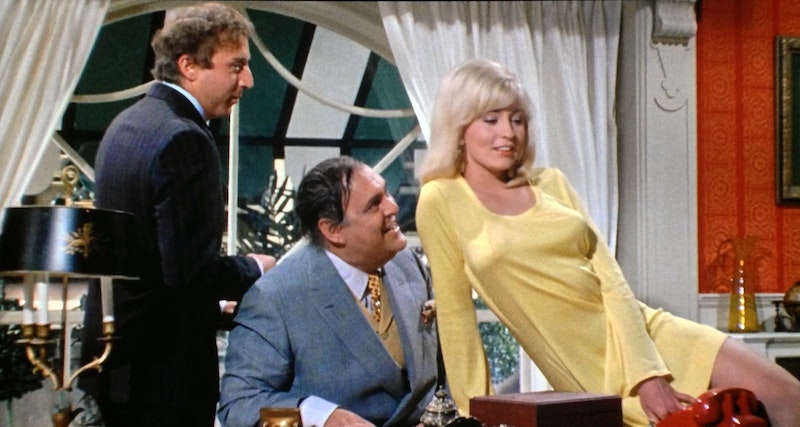 This is part of a series of posts on 1960s comedies. The previous post on A Hard Day's Night is here.

With a racist authoritarian in the White House, Mel Brooks' The Producers (1967) looks, 51 years later, both uncomfortably out-of-date and newly relevant. Its belief in the anti-fascism of the American public comes across as quaintly cheerful. Its cynical portrayal of capitalist complicity, though, is sprightly, much like that catchy ditty, "Springtime for Hitler."

The Producers is a cheerfully amoral film that’s built on a moral faith: you can trust Americans to dislike Nazis. Boisterous Broadway producer Max Bialystock (Zero Mostel) has fallen on hard times, selling his body to little old ladies for investment cash in his next play. Then he meets meek neurotic accountant Leo Bloom (Gene Wilder). Bloom realizes that it's possible to make money with a Broadway flop if you raise far more money than you need for the show. When the play tanks, investors won't expect any return, and you can keep the extra cash. Max and Leo decide to produce the worst play imaginable, and come up with Springtime for Hitler, a tribute to the Fuhrer by ex-Nazi Franz Liebkind (Kenneth Mars). Unfortunately for the producers, the terrible production, direction and acting turns the play into a satire of Hitler rather than a celebration of him, and the public loves it, because, supposedly, the public loves to hate Nazis.

Nazis remain handy screen villains, and people do love to cheer their defeat and demise. There's reason to wonder, though, whether a stage parody of racism, xenophobia, and militarism would necessarily win unanimous accolades. The 2015 German film Look Who's Back filmed an actor playing Hitler walking around Germany interacting with real-life bystanders. Some were amused by "Hitler," some praised his anti-immigrant rhetoric; not very many denounced him. My own book on fascist film included a joke about punching Nazis in its summary, prompting many so-called supporters of free speech to criticize me on social media for encouraging violence against innocent baby Hitlers.

The Producers assumes that a drugged-out hipster playing Hitler will play as parody among those who loathe Nazi ideas. But Trump is every bit as clownish as Springtime's Hitler, and millions of Americans don't get the joke. At a time when mainstream media is running articles about the cheeky irreverence and up-to-the-minute fashion choices of the far right, would critics laugh at the dictator? Or would they watch Hitler snapping his fingers and singing the blues and rush to write headlines like, "Suave Nazis Renew Youth Appeal"?

Brooks himself cosigns at least one Nazi position—homophobia. Max and Leo choose a flamboyantly gay, cross-dressing director (played by Christopher Hewett), because gay people are ridiculous and disgusting and make bad art. Get it? The producers assume their audience will join them in hating Nazis, but they unconsciously reproduce Nazi prejudice, dehumanizing some of the same people that Hitler sent to gas chambers.

Max and Leo are complicit with Nazism in ways that the film is more aware of as well. In order to obtain the rights to the play from Franz Liebkind, the two men have to flatter and cajole him. They join Liebkind in several rounds of "Deutschland Uber Alles," and wear Nazi armbands when necessary. And at the end of the movie, when the play has been a disastrous success, Max tries to convince Liebkind to murder the play's actors, in order to snatch defeat from the jaws of victory. Leo stops him, shouting, "Actors aren't animals, they're human beings!" Max quips, "you've never had dinner with one." It's a good line—but the fact remains that Max is conspiring with an actual Nazi to murder people.

Bialystock and Bloom both hate Nazis—as you'd expect, since they both have Jewish names and are played by Jewish actors. They take off those Nazi armbands, throw them in the garbage can, and spit on them as soon as they’re out of Liebkind's sight. For that matter, they pick the play specifically because they hate Nazis, and figure that other people will hate Nazis too. Nonetheless, despite their personal revulsion, they finance Nazi propaganda, and suck up to a Nazi, because it’ll make them money.

The contemporary discussion of fascism's rise has focused mostly on the supposed appeal of authoritarianism to the working class. Trump, according to many on the right and left, offered populist programs that swayed white working class people who were struggling economically.

But in The Producers, Nazis don't have a visceral appeal to the underclass. Instead, they have a purely financial appeal to people on the make. Max, Leo and Paul Ryan all see in authoritarianism a get-rich quick scheme. They may have some scruples about the ideology, but you can't take scruples to the bank.

Unlike Ryan, the producers suffer for their moral lapse; Max and Leo are found "incredibly guilty" of fraud, and go to prison. That's a happy ending of sorts. The last scenes of the film, though, show them collaborating with Liebkind in prison on yet another theater fraud scheme. Once you start working with the Nazis, it's hard to stop. Someone always figures they can make a buck from Springtime for Hitler. Which is why once again its springtime for Hitler, and winter for everyone else.