From the Philadelphia Film Festival 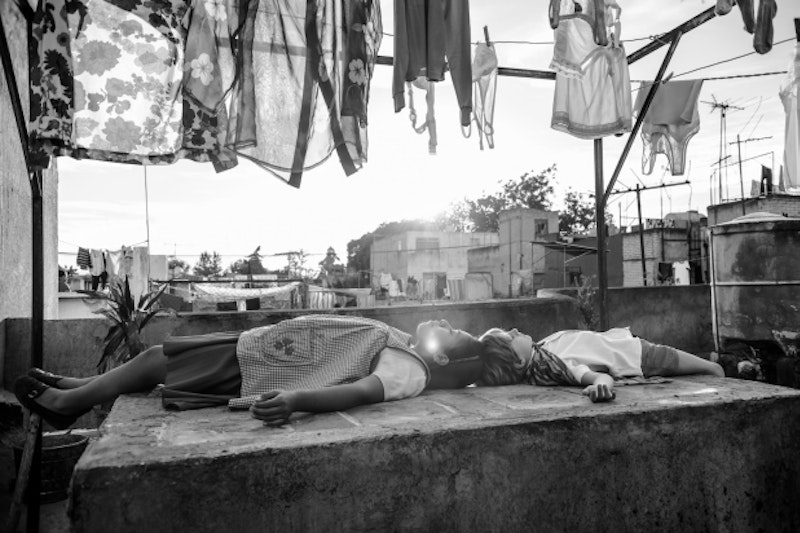 The Philadelphia Film Festival got underway on October 18 and runs through October 28, bringing more than 100 films to the new Philadelphia Film Center and two other local theaters. My reviews of four of the most notable films in the lineup:

With Roma, Alfonso Cuaron delivers his best film since Children of Men. It's a personal film about the director's childhood, in which he painstakingly recreated his childhood home in Mexico, and the events that took place there. It's a gorgeous film, but not typical.

Set in Mexico in the early-1970s, the film focuses on a middle-class Mexican family with four children, as well as their indigenous housekeeper Cleo (Yalitza Aparicio), who soon emerges as the protagonist.

There's family and personal crisis, and political unrest, and Cuaron recreates oddly specific details like a car that's too wide to fit in the alley outside the house. It's rendered in beautiful black and white photography. Cuaron, with an eye towards contending for a large number of Oscars, wrote, directed, shot and edited the film himself.

Roma’s a hard sell. It's 135 minutes. It's in black and white. It's in Spanish and other languages, including the indigenous language Mixtec. It doesn't star any actors that are Hollywood-famous, and it's about some difficult and painful subjects. The last film Cuaron made in Mexico, 2002's great Y Tu Mama Tambien, was both very sexual and sexy; Roma is neither. And it's going to debut on Netflix in December, in a move that's more geared towards winning Netflix some Oscars than in bringing this film at audiences at its best.

Still, Roma is likely to get at least a small theatrical release in December. When it does, I highly recommend seeing Roma on a big screen.

The best of this fall's overlapping three "boy" movies (winning over Ben is Back and Beautiful Boy), Boy Erased is a harrowing but well-done story about gay conversion therapy. Directed by actor Joel Edgerton, who also plays the minister in the conversion program, Boy Erased is adapted from the memoir by Garrard Conley, played in the film by Lucas Hedges (also the star of Ben is Back.) He's a college-aged kid whose parents (preacher Russell Crowe and blonde housewife Nicole Kidman) send him to a conversion camp.

While competent and compelling, Boy Erased doesn't offer much that's different from The Miseducation of Cameron Post, another film on the same topic from earlier this year, although it's very different in tone from 1999's But I'm a Cheerleader, which co-starred RuPaul and gave the material a campier sheen.

Hedges is getting to be a fall-season prestige picture mainstay, but he's believable here, and working with much better material than the misbegotten Ben is Back, a movie in which Julia Roberts tries to I'd-like-to-speak-to-the-manager away her son's drug addiction. In this strangely Australian-heavy cast, Kidman continues her welcome resurgence as a character whose change of heart in many ways drives the film, while Crowe is also the best he's been in some time. Because he's playing an obese, bilious, gay-hating Southern preacher, I assumed Crowe was meant to evoke Jerry Falwell, but when I interviewed Edgerton on my podcast, he said he'd never heard of Falwell.

I enjoyed watching The Front Runner, while acknowledging that it doesn't add up to much, or approach its material with any discernible point of view. I liked it less the more I thought about it.

Directed by the once-again-ascendant Jason Reitman, The Front Runner tells the story of Gary Hart, the leading Democratic candidate for the 1988 presidential nomination, whose political career was derailed in 1987 when reporters discovered his affair with a young woman.

The film, adapted in part by journalist Matt Bai from his own book, corrects some myths about the Hart case, while not particularly concluding anything besides "politics changed that day."

What's good about the film is that it sticks a cast about 30-deep into a compelling story, giving them dialogue that's The West Wing-like, but not as smug. Hart, played by Hugh Jackman, is portrayed as a real-life Jed Bartlett: A brilliant scholar/politician, out to fight the good fight and change politics, surrounded by a staff of earnest true believers. That cast, though. We have J.K. Simmons as a grizzled political adviser, Toby Huss as the guy who owned the actual Monkey Business boat, Steve Zissis as the Miami Herald reporter who staked out Hart, and Molly Ephraim as a female Hart staffer.

Strangely, The Front Runner is another movie that gives The Washington Post credit for what The New York Times did, probably so that it can feature famous Post editors. But the casting of Alfred Molina as Ben Bradlee is a head-scratcher, considering the wealth of cinematic tradition of Bradlee played by actors who look plausibly like him. And while Jackman is fine, he looks more like Dan Quayle than Gary Hart.

It's a decent film. But The Front Runner is sold on the notion that the revelation of Hart's affair changed politics forever and somehow led to the current day. It doesn't make that case.

If I told you the plot of Thunder Road—a small-town cop gets self-destructive and violent as he deals with his mother's death, an uncooperative ex-wife, and raising a young daughter—you'd probably imagine something that's off about 180 degrees, tonally, from what the film actually is.

The film, directed by and starring Jim Cummings, indeed has that premise, but it also approaches the material with a surprising amount of humor. The opening scene, adapted from the director's previous short, consists of one of the most uncomfortable funeral eulogies you'll ever see. The titular Springsteen song isn't used—licensing it probably would’ve cost more than the film itself—but it gets around that in hilarious fashion.

Thunder Road is at turns funny, uncomfortable, and heartbreaking, and I think what works best about is that Cummings is dropped into a serious cop-on-the-edge plot, despite looking like a cop from Super Troopers.