Film Review: A Wrinkle in Time is Mostly a Dud

Although it’s the best role of Chris Pine's career. B- 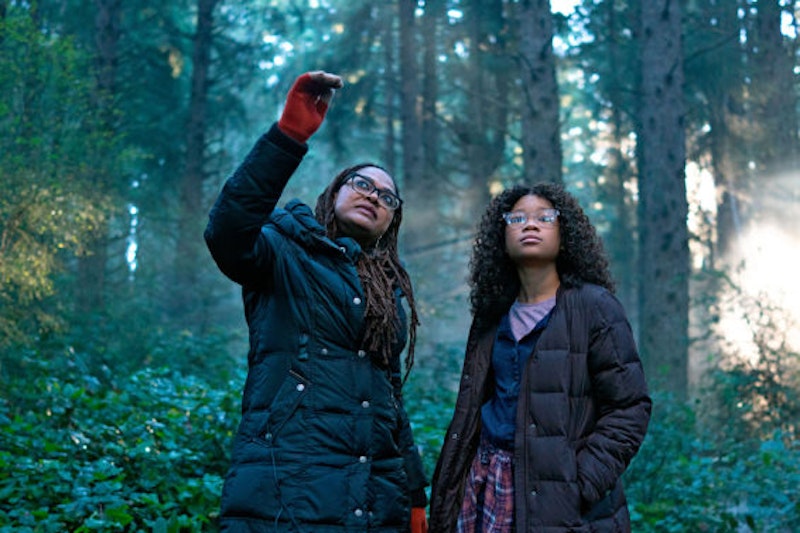 The new film version of A Wrinkle in Time resurrects an age-old debate about movies: is it better for a film to have heavy ambitions and fall short, or to venture little and succeed its own meager expectations?

A Wrinkle in Time, directed by Ava DuVernay and adapted from the beloved 1960s children’s fantasy novel by Madeleine L'Engle, goes decidedly in the former camp. To say it swings for the fences is an understatement. When it succeeds, it’s glorious. But it usually doesn’t. DuVernay is no stranger to ambitious projects—her great Selma, in 2013, was somehow the first nonfiction feature film in history to feature Martin Luther King as the protagonist; she also made the Oscar-nominated documentary 13th and created the TV drama Queen Sugar.

A Wrinkle in Time, though, isn’t nearly as successful as the director’s previous work. It’s based on one of those novels that’s long been described as un-adaptable, only to result in a movie that proved such naysayers right. The film tells the story of Meg Murry (newcomer Storm Reid), a 14-year-old girl whose father, astrophysicist Chris Pine, has been mysteriously missing for four years due to a physics experiment gone wrong. Vowing, along with her brother Charles Wallace (Deric McCabe), to track down their dad, the kids are brought into another dimension, where they must face an evil force. They’re guided in their journey by a group of apparitions that are played by an all-star cast that includes Reese Witherspoon, Mindy Kaling, Zach Galifianakis and Oprah Winfrey.

The best things about the film are Reid, Pine, and their father-daughter dynamic. Reid’s a great find, one who’s got the perfect look, bearing and energy for the role, and this may be Pine’s greatest turn on screen. The ending is especially affecting, which improved my overall impression of the film by a significant factor. There’s also an arc, involving a school bully (Girl Meets World’s Rowan Blanchard) that’s heartbreaking, despite only two or three minutes of screen time.

What doesn’t work? The list is much longer. With the exception of Pine, the always-wonderful Gugu Mbatha-Raw and Oprah—who doesn’t so much act as lend her celebrity to the film—the name actors here are all pretty terrible. Notably subpar is the normally appealing Kaling, whose character is reduced almost entirely to spouting famous quotations. I cringed at the moment she quoted Hamillton—and I love Hamilton.

Beyond that, the film doesn’t do a good job of world-building—there’s not a clear over-arching explanation of what the rules are and how this universe works. And for a film set mostly in alternate planets and universes, where there’s just about no limit to how imaginative one can get with CGI and production design… A Wrinkle in Time doesn’t look all that great.

That said, this is a film for kids, and I’m willing to concede that it may very well play differently to, say, a 14-year-old African-American girl than myself, a 39-year-old white guy who read the book once 30 years ago and barely remembers it. Indeed, A Wrinkle in Time may have spawned the most false narratives of any 2018 release. There’s not a “PC” or “SJW agenda” at work here, unless you see such an agenda in merely the hiring of a black woman director or the casting of people of color. I’m not so certain why the film’s main ideas and contentions—that bullying is bad, self-actualization for young people is good and that love of friends and family can accomplish amazing things—have any reason to be politically incendiary or controversial. It’s just a stupid culture war flashpoint, for reasons totally incidental to the movie itself.

I’ve seen narratives floated both that film critics are being too easy on DuVernay, and too tough on her, and the media assailed for “pitting” A Wrinkle in Time and Black Panther against each other, as if that weren’t how box office reporting works every week of the year. I also don’t want to hear that this is a career-ending debacle for DuVernay, who in a brief career has made two outstanding feature films and an Oscar-nominated documentary while also creating a cable TV series. She’s made one film that you can call a dud—so have most top filmmakers.