Stanley Tucci’s got a great rug, but this movie sucks. D 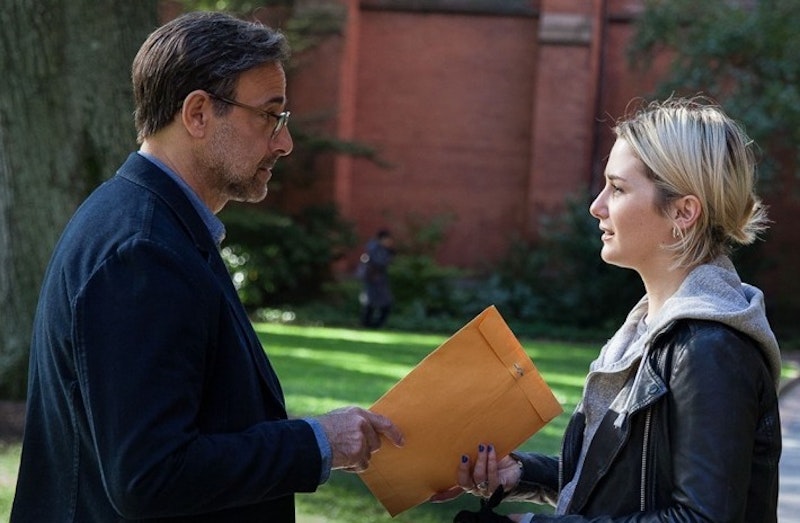 I imagine when Stanley Tucci got the script for Submission in the mail, he read it in a couple of hours and immediately phoned his agent and offered to do it for free. For one, he’s got hair in this, and let me tell you it’s a quality rug. He looks great, and his character, Ted Hensen, a lecherous and pretentious writing professor at a cush Connecticut college, has a scarf and a keffiyeh for every day of the week. More importantly he gets a sex scene with Addison Timlin, who plays a precocious and uniquely talented and motivated student of his named Angela Argo.

You’ve seen this movie before and this story play out in local papers and occasionally nationwide—disgraced teachers hoodwinked by their own hubris, middle-age insecurity, blinding libido, and wandering bedroom eyes as they daydream about their own students in class. Submission, written and directed by Richard Levine and based on Francine Prose’s novel Blue Angel, is more rote middle of the road faux art house filler designed to fill the spaces after all the Oscar winners and nominees have run for months and months.

Eric Hatch, former programmer at the Parkway Theatre and the Maryland Film Festival, had a good series of suggestions the other day for art house operators that are apparently intent on showing crap like The Leisure Seeker and Paris Can Wait and other rip-offs of The Bucket List that seem aimed straight at the “I couldn’t afford dialysis treatment but this movie looks like it’ll do the job” crowd.

He said: “I've been thinking for years, but more and more of late, about how short-sighted it is for film distributors and exhibitors to engage with (or succumb to) a vision of ‘art house’ cinema that largely coddles old, white, affluent audiences with complacent, interchangeable fare… Even within this very narrow audience, we're selling them short. If you're a senior now, you were going on dates when emerging Godard and Antonioni movies were hotly debated topics and downbeat New American Cinema landmarks (not to mention Deep Throat) were mainstream hits.”

Case in point: when I saw Submission, the first trailer that played before the movie was for Happy End, the new Michael Haneke film. After it was over, a man in the back announced to the theater unprompted, “WELL THAT DIDN’T TELL US ANYTHING!” Happily ignorant cranks and clods like that have been yelling shit in movie theaters for decades, but it was dispiriting, especially with Eric’s thoughts in mind. I don’t want a trailer to tell me much, and in the case of Happy End, all I need to know is that it’s a new Michael Haneke film and Isabelle Huppert is in it. I don’t care what it’s about, I’m there. But what’s that dude doing at an indie/art house theater anyway? I guess the appeal of Submission is self-evident: nudity and a grumpy white man wronged by a psychotic hussy. What else could’ve been going through that guy’s head?

Writing for The Washington Post, Ann Hornaday said that Submission “misses a perfect chance to probe the layers of #MeToo,” a bizarre criticism considering this film premiered last June and was produced over a year before Harvey Weinstein was lit up. The #MeToo hashtag was coined less than six months ago, so it’s nonsensical to expect any movie that comes out this year to address it in any explicit or purposeful way. Though her route to these thoughts makes no sense, I agree with this assessment: “Prudent when it could have incited, tame when it should be tough, Submission exhibits all the qualities of academia that drive the likes of Ted up the ivy-covered wall—ultimately leaving viewers feeling less provoked than soothed and underwhelmed.”

Submission has fucking but it’s no less antiseptic or punishingly pedestrian than so much of the crap that’s clogging art house theaters right now.