Doctor Strange and the Metaphysic of Dunces

Even for those of us relying on horoscopes, we know that occultism is bullshit. 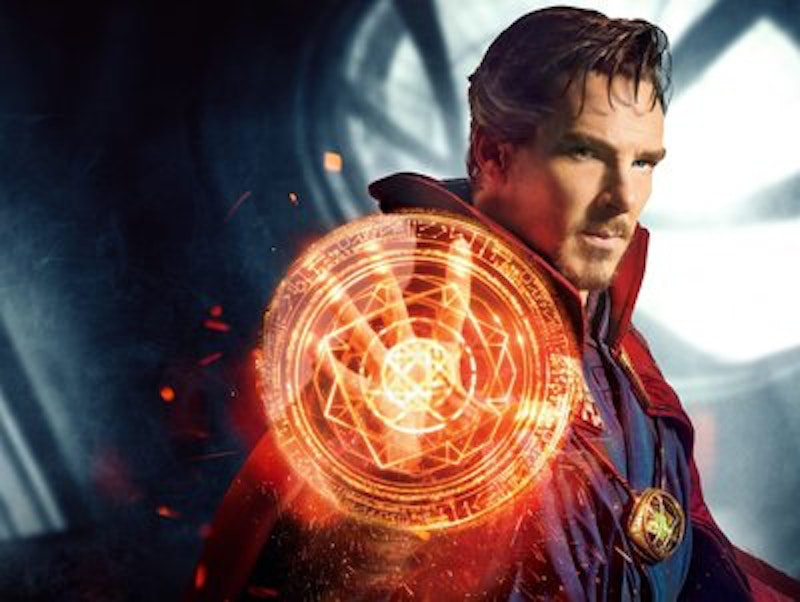 In Marvel’s latest display of vulgar magnificence, Dr. Stephen Strange (Benedict Cumberbatch) is an arrogant brain surgeon turned psychedelic yogi. Before donning the cape and goatee, Strange is a staunch ontological materialist, passionately declaring, “We are made of matter and nothing more” as he wields neuroscience for the profitable means of production that it is.

But when his gifted hands are unsteadied in a car accident, Strange is instantly disappointed by the limits of late capitalist scientism. He turns instead to all-purpose mysticism. After connecting two dots Strange journeys to a shamelessly exoticized Kathmandu, where he finds access to occult knowledge represented in classic fashion by sparkling tomes bound in heavy leather.

Paradoxically, Doctor Strange would offer more to audiences if its story and dialogue had been omitted altogether. Perhaps the script—composed of fortune cookie fragments and a plot so brazenly hackneyed that it is actually hard to follow—would serve the filmmakers better if relegated entirely to someone’s garbage can. At least then the focus group epiphanies could float noncommittally through the cosmic kaleidoscope on display. Instead, concrete declarations of conflict give body to an otherwise empty cocktail of bland Orientalism, muddied narrative, and jolts of optic thrill.

As I waited this one out in my theater seat, my mind drifted to the work of Frankfurt School critical theorist Theodor Adorno. In his ultra-depressing combination memoir-manifesto Minima Moralia, the Marxist philosopher dedicated a late section to “Theses Against Occultism.” Here, Adorno caustically attacked what he viewed as the reign of irrationalism in the form of popular occultism, which he called “the metaphysic of dunces.”

Writing in the 1940s, Adorno sensed something odious about the reemergence in 20th-century society of a prurient interest in all things occult. By “occultism,” he refers broadly to any irrationalist school of hidden knowledge, i.e. parapsychology, astrology, fortune telling, numerology, alternative medicine, misappropriated eastern religion, and the like. Adorno was concerned with precisely the same faux-mystic nonsense that Doctor Strange mines and commodifies in the name of cinematic behemoth.

Adorno linked the quaint irrationalism of occultism directly to the strange mythos structuring late capitalism. For Adorno, capitalist ideology and occultism went hand in hand because they both provided individuals with plans for passive action in an otherwise chaotic universe dominated by unseen forces. By both affirming and denying human agency at the same time, occultism steadies our souls—ever on the verge of total existential meltdown—in precisely the same way that Adam Smith’s invisible hand does the economy. Appeals to market laws and the march of progress are prayers to occult forces, posited as metaphysical conditions that are best met with total surrender.

Adorno viewed interest in occultism as a necessary crutch for the profound alienation we feel in late capitalist society: “If, to the living, objective reality seems deaf as never before, they try to elicit meaning from it by saying abracadabra… the rationality of the real, no longer quite convincing, is replaced by hopping tables and rays from heaps of earth.”

Though Adorno’s take was often harsh and elitist, he sympathized too. He recognized in our impulse towards occultism an essentially forgivable coping mechanism for consciousness crushed on the conveyor belt of exploitative production. Today, “consciousness famished for truth imagines it is grasping a dimly present knowledge diligently denied to it by official progress in all its forms. It is the knowledge that society, by virtually excluding the possibility of spontaneous change, is gravitating towards total catastrophe.”

Because a society premised on reason has become so calamitously unreasonable, our powerlessness can only be encountered in the guise of white magic and New Age platitudes. The dirty word “God” tastes bitter in the Enlightened mouth, but astrological signs roll sexy from the tongue.

Even for those of us relying on horoscopes and going zen in yoga class, we know that occultism is bullshit. But its fraudulence appears as precisely the feature that speaks to us. One can’t help but notice that, as Adorno might put it, Dr. Strange’s “worthless magic is nothing other than the worthless existence it lights up.” We meet Dr. Strange’s temporal powers and telekinesis with a guilty yearning for something outside our own self-imposed borders. But in reality, consuming culture industry dreck like Dr. Strange does nothing but reimpose the paralysis. And so of course none of it is real.

When Dr. Strange first arrives in Kathmandu, a guide shows him to his room and hands him a piece of paper on which a foreign word is written. Strange asks whether that word is to be his mantra. The guide answers that it is only the WiFi password. The reversal is played for a fleeting chuckle, but Adorno suggests it to be a special moment of clarity in an otherwise total waste of time. I can think of no better metaphor for the utter vacuity of pop occultism, the degraded metaphysics we now turn to only because wrong society leaves us in such desperate need for distraction.