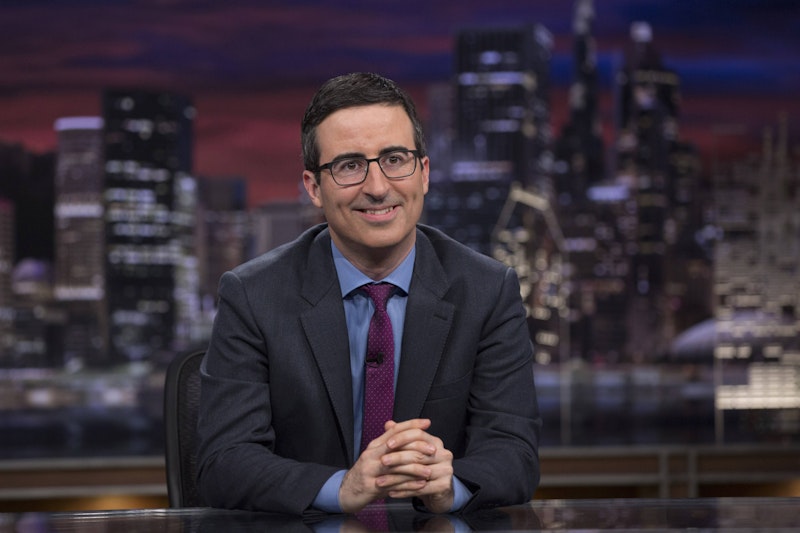 So, yes, John Oliver clearly uses language that’s not meant for kids. But if you're willing to ignore the gauche cascade of fucks and shits, his program is oddly appropriate for children.

I’d always thought that Oliver was a liberal left partisan choir preacher, spouting entertaining invective at conservative pundits. He certainly doesn't try to hide his political leanings—I'm sure his post-election episode will express an appropriate horror at the coming miserable reign of Trump. But for the most part his shows aren't liberal red meat. They're edutainment.

In fact, Oliver's videos are a lot like the Crash Course series my son watches, which teach subjects like history, philosophy, or chemistry, the main difference being that Oliver has funny clips from local news shows instead of little cartoon graphics of Genghis Khan. Oliver will swear, show a cute video of a guy dressing up as his dog's favorite chew toy, and then launch into a deceptively earnest effort to inform the public.

Oliver's show last week was on multi-level marketing companies like Mary Kay and Herbalife, which are essentially pyramid schemes. Herbalife markets teas and powders that are supposed to pep you up and cure your cancer—21st century snake oil. Herbalife sells the products to sellers, who are in turn supposed to rope in other sellers, who are then supposed to rope in sellers. Herbalife tricks people into thinking they’re going to get wealthy pushing its bilge on friends, and then sticks them with a garage full of worthless crap and a giant bill.

Oliver's program isn't really investigative journalism; he's not running around sticking a microphone in anyone's face, a la 60 Minutes. Instead, it's more like a public service message. He even jokes about his informational ambitions at the end of the show, telling people to turn his show into a pyramid scheme. Send clips to five friends, and they'll send clips to five of their friends, and soon the consumer protection message will be disseminated all over the world. Oliver's ambition is to become the famous rock star of marketing fraud warnings.

Even when Oliver talks about politics, it's in a "here is useful information" frame; his piece on Jill Stein and Gary Johnson was meant to inform viewers about the positions of candidates who don't get a lot of press (Oliver's conclusion was that they were both clueless and broadly unfit for office—and he made a good case). One of my son's favorite episodes (which I haven't seen) focuses on special city districts, like water reclamation districts, and why they often lead to terrible policy.

Not everything Oliver does is great, or even right. His recent piece on opioids bordered on drug-war fear-mongering, and suggested that callousness towards chronic pain sufferers was a thing of the past. But right or wrong, and no matter how profane, his show always has an undercurrent of earnestness. Clips of Oliver are often labeled, "John Oliver DESTROYS  Donald Trump, Jill Stein, Anthony Weiner, Herbalife, Hangnails, Whatever!" But at its heart his show is gentle. Like Sesame Street, Last Week Tonight wants to teach you stuff. No wonder the kids love it.