Watching Naked Guys in the Woods 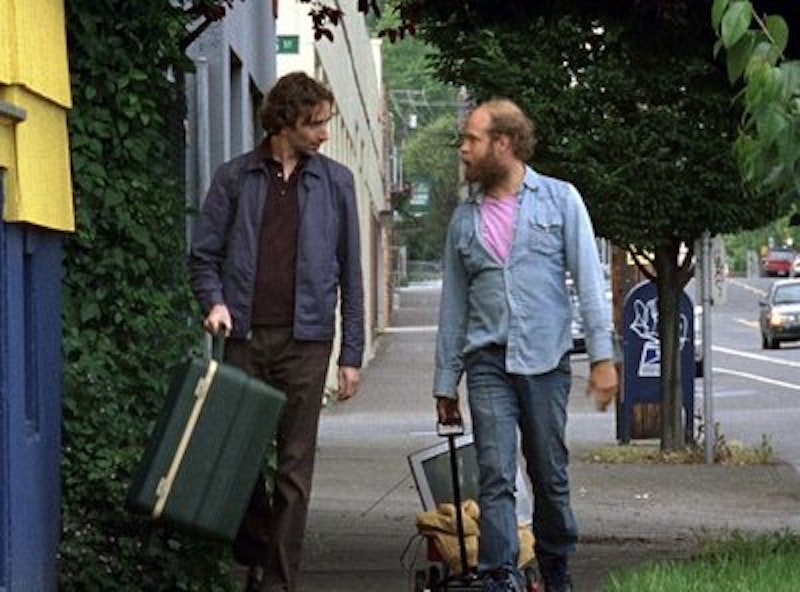 This is the fourth post in a series on women filmmakers. The third, about Belle, is here.

The movie Old Joy (2006), based on a short story by Jonathan Raymond, faithfully checks the usual genre boxes for literary fiction. There’s slow pacing and subdued ambiguous interpersonal conflict. There are rambling but profound anecdotes and images that resonate with a mysterious clarity. And, most of all, there’s that literary fiction staple, male mid-life crisis.

As per lit fic conventions, there's not much of a plot in Old Joy. Mark (Daniel London) leaves his pregnant wife Tanya (Tanya Smith) to go on a weekend camping trip with his old friend Kurt (Will Oldham) accompanied by Mark's dog Lucy. They drive around in Oregon, get lost, finally find the river they were looking for, bathe in hot spring water, and then come home. That's it.

While nothing happens in this film, though, it's an active nothing. The relationship between Mark and Kurt is tense, for reasons that’re never exactly clear, but which seem to involve a mixture of jealousy and desire. Mark, in sync with that mid-life crisis trope, has a small squabble with his wife before he leaves. He's low-key envious of Kurt's carefree hippie gotta ramble lifestyle, and appears uncomfortably effected when Kurt babbles about an awesome happening where he danced with beautiful women and a friend "got laid." Kurt passive-aggressively tells Mark how brave he is for having a child, reminding Mark that this is the poor sap's last fling as free spirit in the woods before he's chained down by middle-class ennui, with the attendant pleasures of receding hairlines, and sexual boredom.

But if Mark is a little wistful about the possibilities of Kurt, Kurt is more than a little wistful about the possibilities of Mark. In one long, quiet sequence, Kurt sits in the car, staring through the windshield as Mark talks to his wife on the phone outside; words and phrases are barely audible, including the final "I love you." Later while the two are at the campfire, Kurt almost breaks down, insisting that there's a barrier between him and Mark that wasn't there before. Mark says there isn't—but of course Kurt's right. Mark is growing up and moving on with his life. Kurt isn't.

Kurt's unspoken desire to be Mark blurs into a possible desire to be with Mark. Before they go to bed at the campsite, Kurt makes some uncomfortable comments about sleeping in the same tent with his friend. When they reach the hot springs, and strip naked (flirting with full frontal) Kurt takes the opportunity to give Mark a shoulder massage, to Mark's initial discomfort.

The film could be read as a kind of sly anti-mid-life crisis brief. Mark drives around listening to Air America droning on about the Bush years and has petty disagreements with his wife. That's kind of drab—but it's a drabness of connection.  Quotidian irritations are to be expected when you're embedded in a community and in meaningful relationships. Kurt, on the other hand, is adrift on a sea of his own flakiness, fetishizing his lost past with Mark because he's not willing to commit to anything else. At one point he solemnly tells Mark how proud he is of him for starting a project with kids and giving something back to the community. "It's nothing you couldn't do if you wanted," Mark says—and then stutters on further realizing that it sounds like a rebuke.

Old Joy isn’t a moral condemnation of Kurt. It's too committed to the lit fic default of ambiguity to make any such forthright statement. Rather it goes back and forth between the two men, enjoying and I think eroticizing their possibilities. The pretty, earnest, soon-to-be-family man is appealing, and the hippie goofball spouting platitudes about how you never hear silence anymore and, whoa, the retreat was transformative—he's appealing too.

Mid-life crisis lit fic is often powered by male dislike of men. The characters hate themselves and are desperate to prove their likability and desirability. The authors skewer their characters even as they identify with them, in a swaggering performance of competitiveness and self-loathing.

Old Joy isn't caught up in that kind of agonized psychodrama, perhaps because, as a woman, Reichardt has more affection for men than male writers tend to have for themselves. An arresting close-up of a slug, pulsating against a leaf, beautiful and disturbing, is a kind of phallic wink. The film is about the clinical, fascinated documentary observation of manly men, who shift and wriggle beneath the camera's gaze. The men don't do much as these things go; there's no fighting or philandering, and the closest thing to an action sequence is when the buddies use some air pistols to shoot at beer cans. Still, through Reichardt's lens, it's fun to watch them moon and yearn and come back home.