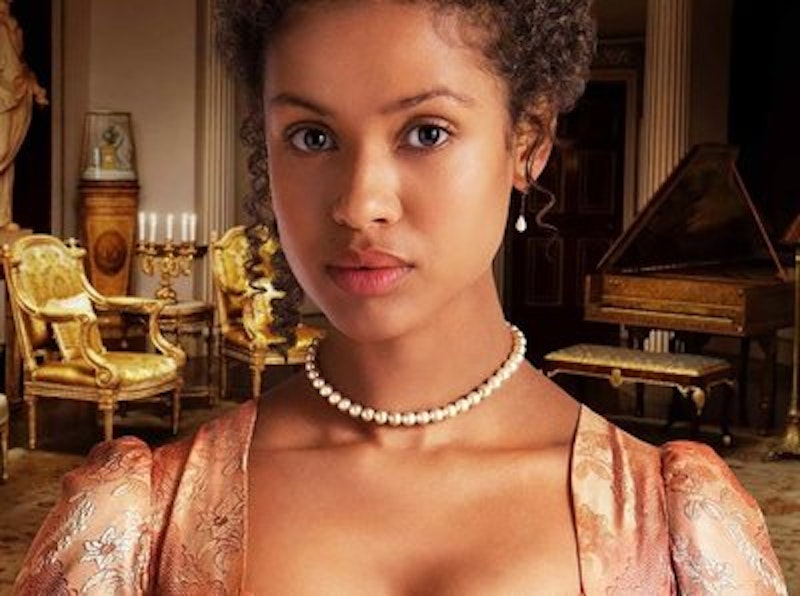 This is the third post in a series on woman filmmakers. The second, on Girl Walks Home Alone at Night, is here.

Is Beyoncé oppressed? She’s one of the most celebrated and wealthiest entertainers on the planet; she has access to money, power, resources and opportunities that the vast majority of people can only dream of. But, still, she’s black—and as a result her achievements are often denigrated or dismissed. She appears on the CMAs, boosts viewership and puts on the best show of the night, but Travis Tritt still felt it necessary to tweet about how she shouldn’t have been there, because black people aren’t country. Beyoncé may be celebrated, but people still point her out to say she doesn’t belong. As long as she’s laughing all the way to the bank, though, why should she, or the left in general, care about the detractors?

Amma Asante’s 2013 film Belle is about the Beyoncé of her day: Dido Elizabeth Belle. Dido (Gugu Mbatha-Raw), a black woman, was the illegitimate daughter of Sir John Lindsay, and was raised by her great-uncle, William Murray (Tom Wilkinson), Lord Chief Justice of the Supreme Court of Britain. In the film, Dido also inherits money from her father; 2000 pounds a year, which is enough to make her independent, and to attract a high-ranking suitor, Oliver Ashford (James Norton).

Dido does suffer racist slights. Though her family loves her, they remain embarrassed by her color, and don’t allow her to attend formal dinners with them. But she is, “blessed with freedom twice over, as a Negro and a woman.” Dido is treated as a daughter rather than a slave, and freed from the terror of impoverished spinsterhood—a fate that hangs over her white cousin/sister Elizabeth (Sarah Gaddon). Dido’s problems are rich people’s problems. She worries, for example, that she will be represented in a subservient position when she sits for an expensive portrait.

The forces that exile Dido from the dining table, though, aren’t just forces that work on her.  British society is built on hierarchical power relations—an etiquette of deference, rules, and social obligations that keep each in their place. Those rules mean that William Murray can raise Dido in his house, since she is his relation. They mean that Elizabeth’s father, remarried, with male children, can disinherit her. And they mean that people with Dido’s coloring are, mostly, slaves, with no rights that an Englishman has to honor. During the film, in fact, William is presiding in the Zong ship case, in which the owners of the Zong threw their human cargo of slaves overboard, ostensibly because the ship was running short of water. In fact, though, it becomes clear, the Zong slaves were ill, and the owners decided they’d make more money by killing them and collecting the insurance.

In deciding the case, Murray must decide an issue of fact. But the case is also about the symbolic status of the slaves. Are they property? Or are they human beings? Putting Dido at the center of the film, and at the center of the frame, is not only about her difficulties as an unusually privileged black person. By framing the story of the Zong around a black woman and her struggle for self-knowledge and love, Belle insists that black people have their own stories, interiority, and, maybe, Jane Austenish happy endings.

Murray is reluctant at first to see the connection between the slaves’ fate and that of his niece. “This is not about Miss Lindsay!” he insists when confronted by Dido’s abolitionist suitor John Davinier (Sam Reid). Reid responds “Of course it is!” and adding, “it’s about all of us!” The same bias that makes Murray treat Dido as a second-class daughter justifies the treatment of black people as cargo. Racism and sexism are levers, which push some people down so others can rise. Prejudice is intertwined with hierarchy; the two reinforce each other.

Power is complicated, and never absolute—relationships and rules can always be manipulated. Mbatha-Raw portrays Dido gathering her dignity, and her class status, in order to snub poor (in various senses) John Davinier. But these weapons of the hierarchy cannot overturn hierarchy. Dido’s wealthy suitor is willing to overlook her skin color for the sake of her fortune, but he doesn’t forget it. She eventually turns him down because she realizes he and his family would always hold her mother against her: “My greatest misfortune,” she says, “would be to marry into a family who would carry me as their shame.” As Oliver’s wife, she’d constantly be reminded that she was not a full person—and perhaps expose herself to actual violence by his brother James (Tom Felton), whose racism is much less decorous than his younger sibling’s. Dido is only able to find an equal partner, and an equal marriage, when she sets aside her own class prejudices, and accepts her love for Mr. Davinier.

It’s easy to dismiss Belle as a fluffy bagatelle that flatters its audience via standard liberal cinema default. It’s not controversial today to condemn slavery. And it is, William Murray, an old rich white dude, who ultimately finds his inner egalitarian and hands down justice. Belle is Dido’s story, but as in Amistad, Glory, and all the other Hollywood slavery films, a white savior figures prominently.

But the fact remains that there’s still something daring and meaningful about a black woman director telling a black woman’s story in a costume romance genre that rarely has room for people like her. Belle is inspired by a 1779 painting of Dido and Elizabeth—perhaps the only painting of the era in which a black person is presented as an equal, accomplished human being, rather than as a subservient bystander, paying tribute to a white protagonist. The film, like the painting, centers on a single wealthy black person. In doing so, though, it challenges the hierarchy that undergirds not just race prejudice, but the righteousness of class divisions. “Human beings cannot be priced since we are priceless—free men and slaves alike,” Davinier tells Murray. Racism devalues some to overvalue others. That’s the logic of capitalism, too.