On Arrival and Loving. 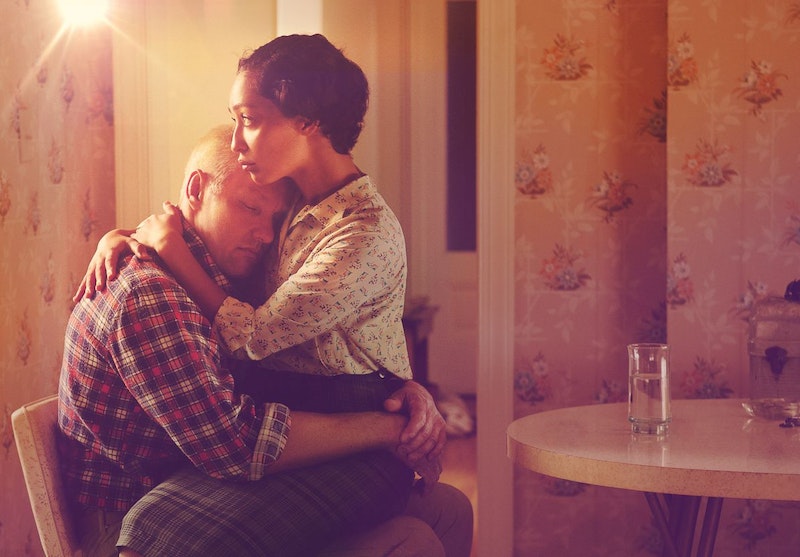 Denis Villeneuve’s Arrival has quite a pedigree. It’s based on an award-winning short story, coming from an off-the-moment director. It’s in the high-90s on Rotten Tomatoes and is touted as a probable Oscar contender, especially centered on Amy Adams’ lead performance. It’s supposed to be a smart, sophisticated sci-fi film, the kind that wins nominations and awards, in the tradition of Gravity and The Martian.

Those people are wrong, because Arrival underperforms its reputation by a significant degree. Adams is excellent, and it starts with a strong premise, but it fails to do anything with it that’s profound or original.

The premise sketched out by Arrival is simple: One day, 12 alien spacecraft arrive on Earth and deposit themselves, floating slightly off the ground, at different locations throughout the globe. Governments respond in various ways, with the U.S. choosing to bring in an academic linguistics expert (Adams) to try to decipher the extraterrestrials’ dolphin-like language. This is done, slowly and painstakingly, but ultimately successfully, although Adams appears to be haunted by thoughts of her dead daughter.

So why did Arrival leave me cold? For several reasons: It’s a sci-fi film that borrows nearly all of its biggest ideas from other movies. It’s generally inert aesthetically without any particular visual panache. It’s slow moving, and its first half is deathly boring. And its third-act twist, while somewhat moving, is almost laughably contrived, to the point where it almost qualifies as magical thinking.

Robert Zemeckis’ Contact, which turns 20 years old next summer, may have been massively flawed, but was a better version of this story. And Arrival borrows multiple beats from that Jodie Foster film, including the generals wanting to blow the aliens up, a sudden realization about an image, and the climax revolving around visions of the heroine’s deceased loved one.

But the film, based on Ted Chiang’s short story, The Story of Your Life, borrows from other major directors and films too—Gravity, Close Encounters, and even The Iron Giant. The aliens look sort of like Kang and Kodos from The Simpsons.

Villeneuve is a director of some acclaim who’s working on the upcoming Blade Runner sequel, though I haven’t loved most of his previous films (most notably Prisoners and Sicario). I wasn’t too impressed with his direction here, either; the pacing is off. A lot of space films—especially Christopher Nolan’s Interstellar—have been obviously self-conscious about exactly how much to borrow from Kubrick and 2001: A Space Odyssey; Arrival bypasses that problem by never doing anything interesting visually at all.

Adams is fantastic, and this is one of her best performances, and Jeremy Renner does some of his best work too. As for Forest Whitaker, he plays a general character and I’m still not sure what accent he was attempting; in one bit of creativity, the “blast ‘em to hell” general character is this time instead a CIA man (Michael Stuhlbarg).

As for the ending, while it makes sense if you think about it enough, it’s just ridiculous. It’s like the ending of Interstellar, only more of a cheat. I’m sure there will be articles in the coming weeks by astrophysicists explaining that it actually makes sense, but I still won’t be convinced.

There’s a long tradition in films about the civil rights movement that such a big, important subject demands a big, important treatment of it. Beyond that, it must demand big, loud performances and monologues. The genius of Loving—director Jeff Nichols’ new film about the couple that fought to defeat Virginia’s ban on interracial marriage in the 1960s—is that it takes the exact opposite approach. It’s a small, quiet, low-key film that tells a story not with loud speechifying or any kind of ostentatious filmmaking, but rather with very human quietness.

Richard and Mildred Loving (Joel Edgerton and Ruth Negga) were an interracial couple—he was white, she was black and Native-American—living in rural Virginia. They married in the mid-1950s, at a time when interracial marriage was illegal in that state. The film tells their story over the course of many years, through the births of their four children, leading up to their successful Supreme Court challenge in 1967. They’re assisted by a pair of lawyers, one of whom is played by Nick Kroll, who shines in a rare dramatic role, especially in contrast with the cartoonishly amoral attorney he played for years on The League.

The film was directed by Nichols, best known for Mud, Take Shelter ,and this year’s Midnight Special—stories of the rural South, heavy on country vistas, and the presence of Michael Shannon (who shows up in Loving as a Life magazine photographer who famously visited the couple). Nichols makes a lot of unconventional choices, most of which pay off handsomely.

The best part of the film, though, is Negga, in a wonderfully understated performance as Mildred Jeter Loving. The little-known Irish/Ethiopian actress shines in this very American role. Edgerton, who seems to have a different accent and look in every one of his movies, is in top form in an even quieter role, sporting a haircut that makes him resemble a young Brett Favre.

In a year featuring lots of films telling various aspects of America’s racial story, Loving is one of the best.