Desire for the Sadist

Holocaust victims identify with Nazis in The Night Porter. 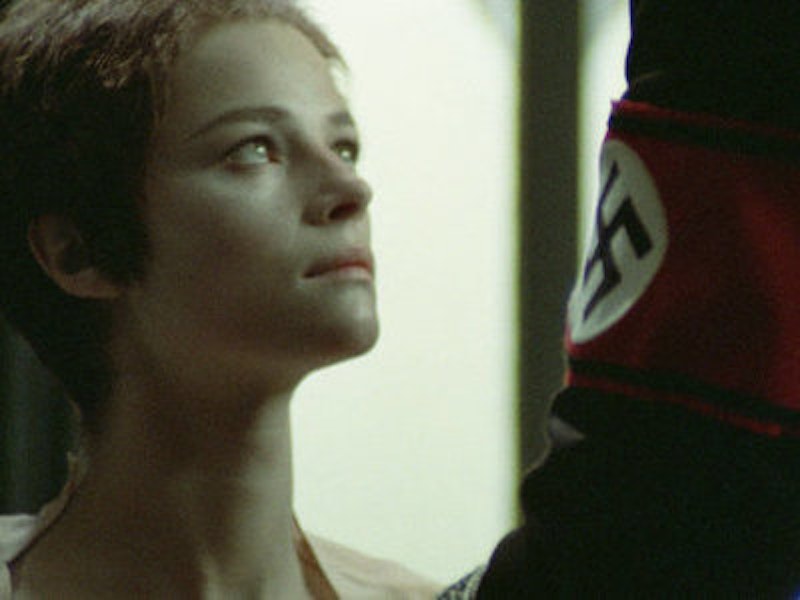 This is the most recent post in a series on women filmmakers. The last, on The Decline of Western Civilization, is here.

Liliana Cavani's The Night Porter (1974) is the story of a concentration camp inmate who falls in love with her guard and rapist. If you think that sounds offensive, you’re not alone. Roger Ebert called the film "as nasty as it is lubricious… a despicable attempt to titillate us by exploiting memories of persecution and suffering." For its detractors, the movie is despicable on multiple levels: it suggests that victims of genocide, torture, and rape are secretly sexually aroused by their suffering, and it transforms a rapist and multiple murderer into a romantic hero.

Nonetheless, while mainstream (mostly male) critics were horrified, feminist writers like Teresa de Lauretis argued that there's more to the film than noxious exploitation. Director Cavani uses numerous dream-like flashbacks and a preposterous, theatrical, campy plot; The Night Porter can be read not a documentary account of Nazi abuse, but as the bleakly sensuous fantasies of one of the abused. The positions of torturer and victim slip around and into each other, and this is presented as part of the violence itself—a violence that continues in the mind and heart long after it ceases physically.

The film is set in Vienna in 1957, where Max (Dirk Bogarde) a former SS officer, works as a night porter. Max is connected to a circle of former Nazis who, improbably, stage mock war crimes trials for each other as a way of collecting and destroying evidence against them. Max's own trial is coming up when he encounters Lucia (Charlotte Rampling) staying in the hotel. Lucia is now the wife of a famous American conductor, but during the war she was a concentration camp prisoner, and Max raped and tortured her. Max fears she will report him to the authorities, and he murders a friend who could identify her. He plans to silence Lucia too, but instead they begin a violent, S&M tinged sexual relationship. Lucia stays in Vienna when her husband travels on, and moves into Max's apartment.  Max's Nazi buddies set out to kill him, as Nazis will, though their precise motivations are unclear.  In any case, they prevent him from leaving his hotel and getting food, and he and Lucia slowly starve, though that doesn't stop them from having sex. Finally the couple leave the apartment, drive for some distance, then inexplicably get out of the car and walk, at which point they are shot. That's the end, such as it is.

The plot is not just silly; it's campy. The film is draped in ambivalent drag—melodrama concealing, or revealing unspoken and hidden desires. Those desires do not center around Lucia, but on Max. The opening of the film shows him going to the room of one of the hotel guests, Countess Stein (Isa Miranda), who makes a clumsy pass at him. Max rebuffs her, as he apparently has in the past, and instead rousts out a young man who has signed a contract agreeing to satisfy the countess in return for lodging in the hotel. We get a glimpse of the young man's penis—the first and virtually only full frontal shot in the film.

It’s men who are initially objectified in The Night Porter. Max the sadistic torturer is also, directly and by association, Max the gigolo. When Max first goes to Lucia's room in the hotel, another porter suggestively notes that her husband is gone, and that the woman is bored. Max is figured as a servant and a plaything.

The scrambling of the roles of sadist/masochist, objectifier/object is also accomplished through juxtaposition of the film's two main high camp set pieces. Both of these teeter on the border between fantasy and reality. They occur as flashbacks or dream sequences, and are too over the top to read as "real." Nonetheless characters treat them in as if they (or something like them) really happened.

The first sequence is supposedly set in 1957; Bert (Amedeo Amodio), a former SS himself, performs an energetic ballet before a group of SS officers. Bert is almost completely nude; he wears only a thong, which barely contains his penis. He’s magnificently muscled, and his sensuality is blatantly homoerotic. The film implies that Bert and Max are lovers, or at least that Bert would like Max to be his lover. Towards the end of the film, Bert says he has "lost" Max, and is visibly upset at the need to kill him. In another scene earlier on, Bert asks Max to administer a sleeping formula by plunging a giant needle into his rear; afterwards, he tells Max how good he is at administering the dose, and runs his hand over the other man's. He also tells Max that if he had enough money he’d make Max his permanent servant to do everything for him.  Bert, the objectified spectacle, objectifies Max by (pointedly) topping from the bottom, turning Max's needle into a spectacle for Bert's own sexual gratification. The sadistic Nazi performs a sexual ballet, stripped for filming, just as in flashback Max photographs nude victims in the camp—including Lucia—for his own pleasure.

Lucia's dance is the most famous scene in the movie. Lucia is topless, wearing a Nazi cap, suspenders and past-the-elbow black gloves. Like Bert, she dances for SS officers, though her approach is more lowbrow. She flirts shamelessly with the officers who are also her jailers, covering and uncovering her breasts with her rubber-clad hands and grasping her crotch.  At the end of the number, as a present and a prize, Max hands her a box. She opens it with enthusiasm—to find inside a severed human head.

Max explains to the Countess that the head belonged to another prisoner who was bothering Lucia. Lucia had asked to have the man transferred, but Max says he "couldn't resist" murdering the man and presenting the head as a prank. He compares his prank to the biblical story of Salomé—a story famously turned into theater with overwhelming homoerotic overtones by Oscar Wilde.

The Countess tells Max, "You were always insane, and you still are," and Bogarde plays Max's response as if he’s psychologically coming undone—the buttoned-up Porter suddenly turning voluble, his impassive, controlled features writhing and contorting with inappropriate humor and enthusiasm. But Max hamming it up is like much in the film, a diversion. His mental confusion and distress is a mask, which hides someone else's torment.

Salomé is gloatingly satisfied when John the Baptist's head is brought to her. That’s not Lucia's reaction. When she sees the head, she stares at it dully. Her erotic courting of her captors ends in death and sadism—though the identity of the sadist is painfully uncertain. Max cuts off the prisoner's head for Lucia, at her whim. His "gift" is less a gesture of affection than it is a brutal assertion of moral equivalence. Lucia wanted the man gone, and so he is; she flirted with Nazis, and so she is a Nazi. Max's sadistic message is, as he says to the Countess, "We're both in the same boat." Ebert and others scorned the film for suggesting that Lucia enjoys being tortured. But Max tells her he knows she wants to torture other people—not least, Max himself.

Critics who dislike The Night Porter often focus on Lucia's masochism. Max hits her and chains her in his apartment, but she still insists that she is there of her own "free will." Masochism isn't necessarily a sign of mental illness or brokenness; it can just be a kink. In this case, though, Lucia is reenacting her rape and abuse with her rapist. In the concentration camp, Max fired a gun at her as she screamed and sobbed nude against a wall. He shoved his fingers in her mouth and made her suck them. Conflating consensual masochism with a hideously abusive relationship turns Lucia into a collaborator in her own violation.

But the dramatic, ugly impact of the masochism can obscure the fact that, in the 1957 scenes, Lucia occasionally takes on the role of abuser rather than abused. When Max first comes to her room in the hotel, he strikes her in anger and fear, afraid that she's going to turn him in. She doesn't simply cower; she launches herself at him; they struggle on the floor as she laughs and kisses him. The scene is violent, but the violence isn't one-sided. Later, in the apartment, she breaks a bottle and scatters glass where she knows Max will step on it. He badly injures his foot, and the blood and pain visibly excites her. In the most explicit sex scene in the film, she devours some jelly that looks like blood, and then pulls him onto the floor where she climbs on top of him and takes him. He lies under her, mostly passive, as she thrusts.

Lucia is dehumanized by her relationship to Max. Before she meets him, she’s the sophisticated wife of a conductor, with upright posture and pearls around her neck; she and her husband are accustomed to read and enjoy his symphony reviews together after a performance. With Max, she turns almost non-verbal. He chains her up, supposedly to prevent his Nazi buddies from taking her away, and she crawls around the apartment, under tables and across the floor, pursuing and analogous to Max's Siamese cat. Max calls her his "little girl," and in a flashback he's shown pulling her into a nightgown, which she buys a duplicate of in anticipation of sleeping with him again. But while she may be infantilized, she's also presented as a beast, reduced to rudimentary needs; "I'm hungry" is about the only thing she says in the last half hour of the film. As she talks less and less, Rampling's feral smile becomes more and more chilling.

Beast and child are both misogynist tropes. In turning herself into a little girl and an animal, Lucia is taking on the shape of Max's sadistic, stereotypical desires. She becomes his mirror. It’s Max, after all, who indulges in childish play-acting, pretending to be a photographer in the camps, or decapitating prisoners on a whim. It’s Max whose appetites rule him, nuzzling Lucia's wounds in the camp like a beast.

Lucia's desire for Max is also a desire to be him. Sexual power, sexual agency, sexual pleasure: they’re all intertwined with violence. Dance, flirt, present yourself as a sexual being, and men literally lose their heads. In 1940, in 1957, in 1974, in 2017, the sadists have the power, which means that to be powerful you must become a sadist. Lucia seeks to take control of her own sexuality and desire, but the man who has control of her sexuality and desire is Max. Therefore she must become Max, and, like him, destroy her self.

Max, then, is a sexual, objectified body both because he’s the object of Lucia's desire, and because he’s Lucia. As a female director, Cavani frames Max as a figure of identification and desire. But to identify with and desire power is both a fantasy and a nightmare. To escape the rapist, you must be the rapist, which means that for Cavani there is no escape. In The Night Porter, the Nazi is inside you.