La La Land and the Dialectic of Pop

Should works of pop culture win awards for being the most popular? 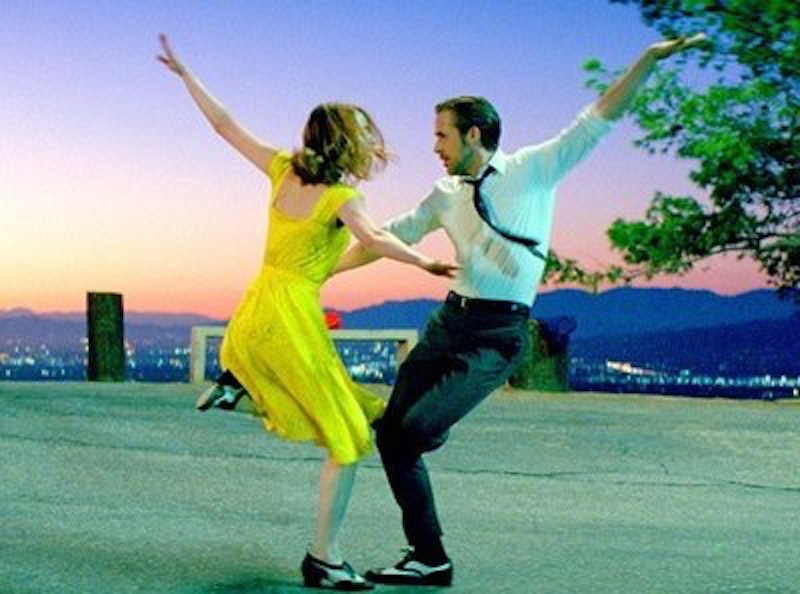 Every year, pop awards season resurrects the paradox of democracy. Alexis de Tocqueville warned against a dark side of civics called the “tyranny of the majority,” and John Stuart Mill bristled at the “oppressive yoke of uniformity in opinion and practice” found in democratic societies.

These days, we take democracy for granted, but turn technical and elitist when people vote the wrong way. Democracy rules until our candidate loses, at which point it becomes a flawed system that cedes too much power to an ignorant and irresponsible electorate. To varying degrees, we’re all secretly haunted by the unfortunate idea that stupid people should not be allowed to vote—and neither should people who are just plain wrong, either.

For a democratic culture so continuously distraught by democracy’s own shortcomings, it makes sense that a similar conflict would characterize our pop culture discourse too. We see the struggle between individual and shared values most clearly during pop culture awards season, in the backlashes and counter-backlashes that supplement and correct institutional proceedings like the Golden Globes, Oscars, and Grammys. One notices that although pop culture is a category first constituted by that which is popular, there is no quicker way to undermine an awards show than to call it a mere popularity contest.

This question takes many forms, and there aren’t good answers to any of them. Some critics negotiate the issue by having it both ways. They divide their award show commentary between picks and predictions. There’s a commonsense difference between who “will win” and who “should win.” Of course, that convenient distinction doesn’t explain why there should be a difference in the first place. But the discrepancy between a real winner and a “real” winner feels consonant with our intuition. There’s the pervasive suspicion that true artistic merit will always be out of step with the consuming masses. The one with the statuette is always a fake; the true winner is the martyred runner-up.

This year, the discussion centers on Damien Chazelle’s La La Land. As if going through the motions, mainstream critics issued a torrent of universal acclaim that was soon followed by a miserly, ultra-critical backlash. The debate’s details—and indeed, the underlying merits of the film itself—are less important than the standardized form of the debate: the critics’ darling is increasingly written off as a mundane fraud.

What’s funny is that if Sebastian (Ryan Gosling) were a real person, he’d be the first to accuse La La Land of cultural appropriation. If Mia (Emma Stone) weren’t fictional, she’d declare the film to be musical theater for non-musical theater fans.

Through its own eyes, La La Land is an extravagant exercise in selling out. Chazelle gives us fictional characters that would sneer at the reality of their own movie. But this contradiction is no flaw; it’s precisely what is so useful about the movie.

La La Land sets up a paradoxical construct in which individual authenticity can only be achieved by mass spectacle. It’s a story about humble passion projects, as delivered by a big-budget extravaganza supported by robust Hollywood financing. It celebrates creativity by speaking in clichés. A-list celebrities portray starving artists, and solidarity with the avant-garde amounts to an amplification of that which is most widely accessible, crowd-pleasing, and middlebrow. La La Land repackages subculture as monoculture.

The term “dialectic” has a complex and varied meaning in the history of philosophy, but let’s define it as a form of argument that proceeds by mediating, passing in and out of, and blurring the line between two contradictory claims. It’s not about finding a middle ground or weighing pros and cons. It’s about pushing contradiction hard enough to produce a transformation in understanding.

We can view the contradictory La La Land as a microcosmic distillation of the dialectical strain we all face when encountering pop culture. The dialectic of pop mediates two oppositional standpoints to aesthetic popularity: pop-individualism and pop-collectivism.

Crucially, each side emerges as an orientation to popularity as such. In other words, the pop-individualist doesn’t just happen to hate pop songs due to her specifically refined taste; she hates popular songs precisely because they are popular. Likewise, the pop-collectivist doesn’t owe her enjoyment of pop songs to a happy congruence of her personal taste with current trends; she enjoys the popularity of a pop song as much or more than the song itself.

To be sure, the point is not to privilege either side of the dialectic of pop. One orientation might make sense during one period of your life, and the opposite attitude might pervade your relationship to another era. Both orientations represent a complex and value-laden set of characteristics, and neither category represents how we should want to experience pop culture all of the time.

I define Pop as that which intervenes in an undivided aesthetic experience to cleave it in two, recasting the aesthetic experience as divided between pop-individualism and pop-collectivism. By its nature, Pop cannot privilege either orientation. Rather, Pop is the structuring referent we stand in relation to when modulating one way or the other.

I should note that the dialectic of pop owes much to the well-trod debate between poptimism and rockism. However, that discussion is specific to music criticism, and arises from specific historical pockets. I deal instead with pop culture in its widest sense, i.e. any art that is popular, and also treat pop culture as a trans-historical phenomenon. The poptimism/rockism divide is better understood as one symptom of the structural antinomy of pop culture itself. The same antinomies are reflected elsewhere, e.g. in the relative cultural currency of television shows versus movies, in spandex versus indie comic books, in underground versus commercial hip-hop, etc.

Returning to La La Land, we can see how precisely Chazelle grasps the dialectic of pop. His film is a fable of authentic individuals set against collective mediocrity. But the film is its own refutation.

Seb pouts while performing with The Messengers, but the song we hear them play is actually pretty good. Mia devotes herself to experimental theater, but she isn’t artistically successful until the showbiz industrial complex anoints her as such. The movie communicates a classicist belief in the enduring power of the Hollywood monolith by using characters that express nothing but hostility toward Hollywood. Though the film is fairly praised for its boldness and originality, in truth its resuscitation of the Hollywood musical is expressionist shorthand for an all-purpose “movie magic” that only financed culture can produce. La La Land is exactly the commercial extravaganza that Seb and Mia steel themselves against.

You get the picture. La La Land provides us with an opportunity to reckon with these antinomies, in the hope that we might overcome them and land somewhere new. Pop-collectivism has been the dominant discourse since, roughly, Lady Gaga’s emergence circa 2008—a discursive shift probably connected to the cultural elite’s optimism for the Obama presidency, and propped up by the diminishing returns of a mythic Golden Age of Television.

Since then, particularly in the last couple of years, the globe has darkened and society has continued to debase itself with hate, cruelty, and ignorance. Soon we’ll all have to admit that nice speeches by Meryl Streep just won’t cut it anymore, and turn instead to avenues of radical pop-individualism. Perhaps La La Land is pop-collectivism’s death knell, the high water mark for naïve consumption and consensus aesthetics.

But in the years to come, it will be important to bear the dialectic of pop in mind. We should focus on mediating both pop orientations, rather than falling back on prioritizing one over the other. If the current pop culture discourse is any indication—filled with bitter detractors and lackadaisical cheerleaders—neither is better and both are worse.