Film Review: The Founder’s No Masterpiece

But the McDonald’s origin story is lively and entertaining. B+ 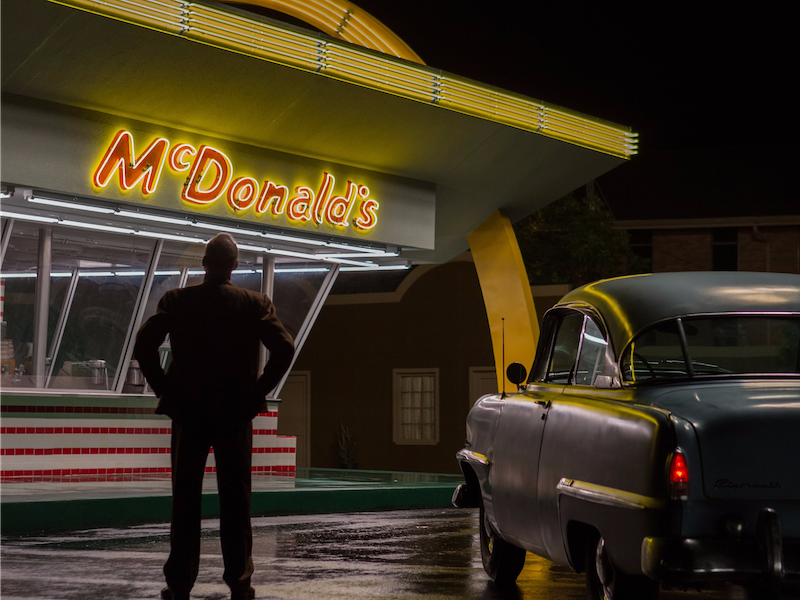 The success in 2011 of David Fincher’s The Social Network indicated that we were about to get a spate of films that were origin stories of major American corporations. The Apple version, Steve Jobs, followed four years later. The Founder, which delves into the origin story of McDonald’s, isn’t the achievement that The Social Network was and doesn’t break a lot of ground. But it’s a consistently entertaining, well-written film, which evokes its era perfectly and is buoyed by three standout performances.

The film, set in the 1950s and 60s, tells the story of how Ray Kroc (Michael Keaton), a struggling milkshake machine salesman, discovered the popular, highly-efficient original McDonald’s location in San Bernardino, CA. Founded by the McDonald brothers (John Carroll Lynch and Nick Offerman), who essentially invented the process of fast food, Kroc decides the idea is ripe for national franchising. And just as The Social Network pivoted on the battles between Mark Zuckerberg and his former partners over who ultimately invented Facebook, Kroc and the McDonalds soon themselves at war over the company.

Kroc is introduced as a sad-sack salesman, with big ambitions but not a lot of success, in a marriage (to Laura Dern) that looks like mutual loathing. But the movie comes alive when he meets the brothers, with a great scene in which they tell their mutual stories over dinner. You might not be interested in the fast food business, or business in general, but the movie’s screenplay (by The Wrestler’s Robert Siegel) makes it fascinating—and concludes that while Kroc was a huge asshole who screwed over his business partners, that characteristic is what made McDonald’s.

Keaton’s recent career resurgence had him playing lead roles in the last two Oscar-winners for Best Picture and while he probably won’t make it three in a row, he’s magnetic as Kroc—capturing the real man’s odd vocal affectations. It’s like there’s one moment where something clicks and he turns from Willy Loman into Donald Trump. Offerman and Lynch both radiate equal parts decency and stubbornness; the two of them have rarely been better. BJ Novak has a small but fun part as a financial consigliere of Kroc’s.

The Founder also gives an accurate depiction of mid-century America, but, aside from one brief speech at the end, avoids that common pitfall of making its story a microcosm of America itself. The film also mostly sticks to the true story, including when it comes to Keaton’s courtship of Joan (Linda Cardellini) who’s eventually become his wife. And I was certainly not expecting the film to explain the origin story of the McDonald’s on Hennepin Ave. in Minneapolis, the place that 30 years later would become the epicenter of that city’s 1980s punk rock scene.

The only downsides to the film are that it doesn’t serve its female characters well—Cardellini was much better in a similar part on one of the later seasons of Mad Men, while Dern’s talents are mostly wasted. And the film never really delves into the question of the appeal of McDonald’s food, and how it got a foothold.

But overall, The Founder is a success. Director John Lee Hancock has something of a mixed resume (The Blind Side, Saving Mr. Banks, The Alamo, The Rookie), but this is likely his best film.

A narrative has taken hold that M. Night Shyamalan, after a decade’s worth of high-budget Hollywood flops, has revitalized himself as a director of back-to-basics, low-budget horror films, in working with producer Jason Blum. With 2015’s The Visit and his new Split, as the story goes, Shyamalan has rediscovered his early talent; both have earned him his best reviews in years. The theory is half-right, as The Visit was quite good and did indicate that the M. Night of old was back. Split, though, is not. It’s pretty terrible, although in a different way from any of its director’s other failures.

Split combines two mini-genres—the enclosed-space kidnapping thriller and the multiple-personalities thriller—that’ve made for some of the worst movies of all time. A good movie could’ve been fashioned out of hashing the clichés of the two together, but Shyamalan instead plays it totally straight.

The premise: Three teenage girls (Anna Taylor-Joy from The Witch, Haley Lu Richardson from Edge of Seventeen and Jessica Sula from Recovery Road) are kidnapped from a birthday party at a mall and held captive in a mysterious location. The kidnapper (James McAvoy) has dissociative identity disorder, which used to be called multiple personality disorder. He has 23 distinct personalities, which means McAvoy is playing 23 different characters, including a couple of women, a gay man, and a mysterious entity called “The Beast.”

There isn’t a whole lot here, aside from the McAvoy performance that's more impressive for degree-of-difficulty reasons than for any kind of superlative acting. And maybe some viewers of Split will be able to parse and keep straight the different personalities, their names and their characteristics but I couldn’t.

Mental illness advocacy groups have called for a boycott of the film, due to its depiction of a mentally ill person as a dangerous, possibly violent kidnapper. I was more perturbed by how the film’s balance: are we supposed to root for the captives to kill their captor, or for his health to get better? This is a needle Split isn't able to thread.

The other major character is Betty Buckley as a therapist, and though I love seeing a stage legend getting a major role, all we learn about her character is that she doesn’t appear to be a very good therapist. And Shyamalan, as usual, appears in a cameo role, somehow looking not a day older than when he directed The Sixth Sense 18 years ago.

As Charlie Kaufman’s Adaptation so brilliantly satirized, there were a lot of hacky thrillers in the 1980s and '90s that included multiple personality gimmicks, and the worst one of all was probably Color of Night, the infamous Bruce Willis movie from 1994. Split borrows a huge chunk of that movie’s ending, including that terrible scene in which someone quickly cycles through all of their personalities.

I’m not ready to write off M. Night Shyamalan; he’s clearly very talented and still a relatively young man. I’d like to see him finally get to make Labor of Love, the dream project he’s been talking about doing his entire career. But Split shows that the arc of his career may not necessarily be going in the direction everyone says it is.